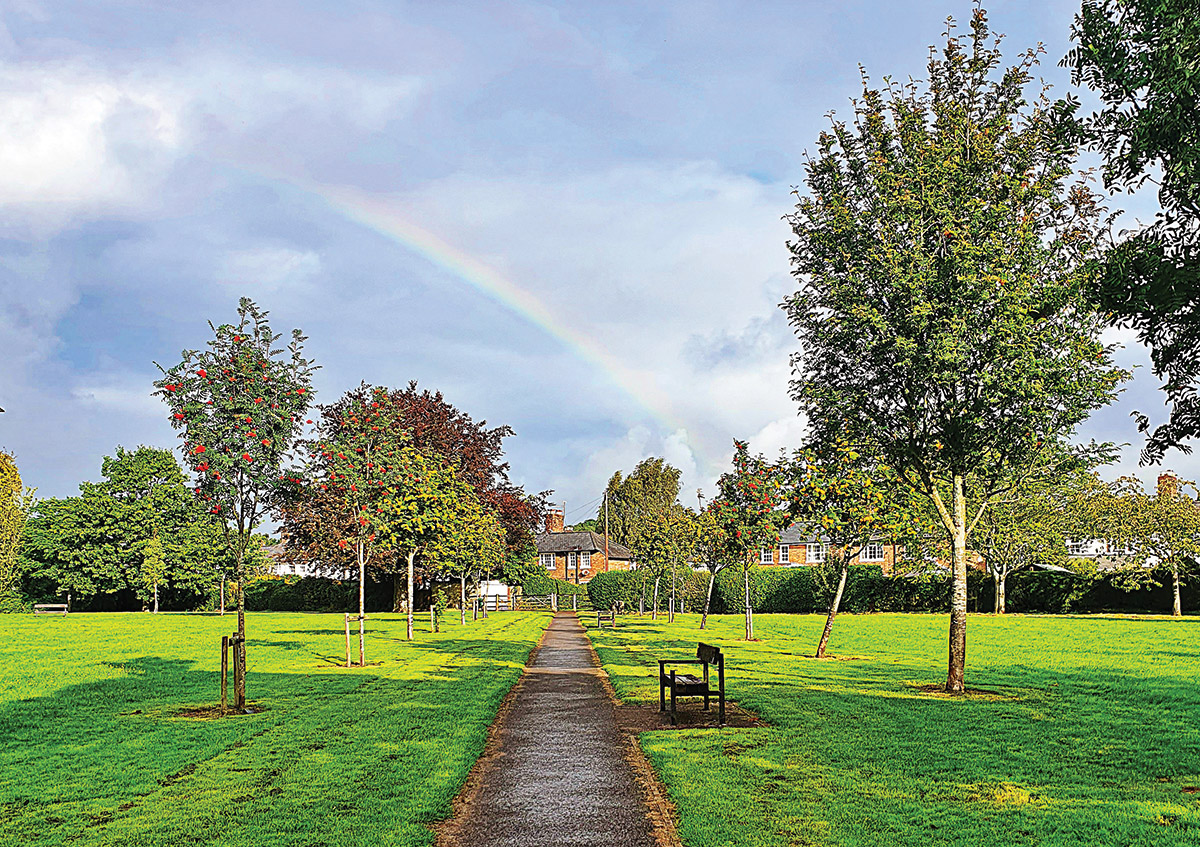 Parc-y-Pentre is enjoyed by Rhiwbina residents all year round. Yet it was never intended to be a park. Here’s the story of a village gem

Hidden away behind the hustle and bustle of village life sits an area of greenery that only the locals seem to know about.

Yet its history suggests that it was never intended to be a park at all. The Garden Village was begun in 1912 to a masterplan by Raymond Unwin, one of the leading architects of the Garden City movement. The first 34 houses were built in 1913 and more were built from 1919 to 1923, occupying an area between Pen-y-Dre and Lon Isa. When the Garden Village was originally conceived, several greens and small parks were originally included as part of the layout. The land which now forms Parc-y-Pentre was originally earmarked as a smaller square around which houses would be built, similar to that of Charlotte Square or Y Groes. Entry would have been gained from the entrance on Lon Isa, which now provides one of the three entrances to the park.

The houses were never constructed, leaving the upper floors of the surrounding houses on all sides exposed. For many years, the land was left as more of a playing field. These days, the gardens which face the park are enclosed by attractive mature hedges of laurel and privet. All now provide an attractive green backdrop to the park.

By the late 1950s, it was decided that something should be done with the land. Officially established by the Cardiff Rural District Council and Rhiwbina Garden Village Ltd, and opened by Mrs Alice Freeborn on 27th April 1960, Parc-y-Pentre was warmly welcomed by members of the community. It has since gone on to become a firm favourite with walkers, dog owners and families for over 60 years. A stone plinth featuring a plaque, commemorating the opening still remains in the park to this day.

Interviewed by Rhiwbina Living in 2010, ESPN’s iconic commentator Alan Wilkins recalls visiting the park after school with his brother Howard to play cricket. The brothers, who grew up in the village, considered the park to be their home pitch.

“After school, all the boys used to play cricket in the little park called Parc-y-Pentre – these were absolutely memorable games of cricket, played with a tennis ball and played with such passion and fun. I can still see us all playing and imagining ourselves to be the great cricketers of the time. Boys’ imaginations and a safe green environment to play cricket in – it didn’t get much better! Parc-y-Pentre was our Lord’s Cricket Ground!” said Alan.

It was in June 1960 that the Whitchurch Parish Council agreed to take over the administration and maintenance of the park from the Rural District Council, which had been responsible for sanitation, public health and housing.

The layout of the park was reviewed by the Whitchurch Parish Council in October 1961. It was felt that the land was more of a playing field than a park and estimates were obtained to find out the cost of planting trees and shrubs to enhance the area.

Residents of the Garden Village kindly donated some of the trees and roses for the park – one Cypress tree, two flowering Almond trees and 16 climbing Roses.

Having accepted a quote from G. Pudge & Sons Ltd, playground equipment was installed the following year. The playground consisted of a merry-go-round and rocking horse.

It was situated in the south-east corner of the park, and there is evidence of a concrete rectangle, which may have been the base for the rocking horse. The merry-go-round and horse were eventually removed and new equipment was put in its place, including a small climbing frame, a spring rider and a roundabout. These were situated in the extreme south-east of the park and has also now been removed.

The park is renowned for its trees and in 1962, the Council approved a request from the Rhiwbina Garden Village Association to plant a tree in Parc-y-Pentre in connection with their jubilee celebrations.

In April 2010, a shrub was also planted to mark the 50th anniversary of Parc-y-Pentre itself. A Cytisus battandieri (Pineapple broom) was donated by the Rhiwbina Garden Village Residents Association, who also organised the planting ceremony.

One of the more familiar sights in the park around that time was one of Rhiwbina’s most famous international celebrities – Nick the Sheep.

The superstar sheep was owned by resident Dave Palmer, who rescued Nick when he was a newborn lamb. Dave and Nick were frequent visitors to the park together and the pair featured in international media outlets, including a National Geographic TV show and the Daily Mail. Nick sadly passed away in 2013, and a tree and a small memorial in the park was unveiled in his honour.

In more recent times, the park has become a central focus for the village, and a successful location for community events. Since 2017, it has become a main arena for the Rhiwbina Summer Festival. The park is packed with fairground rides, stalls and is also the venue for the annual Tug-o’-War and the Dog Show. The park is also a popular place for families and friends to share picnics during the warmer months.

Up until this year, there has also been an annual Christmas dog get-together, where local residents and their dogs would meet for a Christmas walk and talk. During the 2020 pandemic, the park was used by locals as a meeting place for socially-distanced coffees and chats.

There are now plans to convert part of the park into meadowland as part of Local Places for Nature scheme – a brand-new initiative that aims to create, restore and enhance hundreds of habitats across the country. The initiative is part of a wider £5m Welsh Government ‘Local Places for Nature’ fund, committed to acquiring, restoring and enhancing nature ‘on your doorstep’. Work is planned to start in the Spring of 2021. There have also been rumours that the ageing benches are to be replaced over the next few months or so.

Locals will each have their own memories of the little park that has played such a central role to village life over the years. The place very much reflects the changing of the seasons and whether it’s enjoying the sun in a deck chair on a Summer’s afternoon, or wrapping up warm with a loved one on a crisp Winter’s day, residents will recall their memories of the place with a smile. It will also provide memories and enjoyment for those generations yet to come.

The park is accessible via kissing gates from Lon Y Dail and Pen-y-Dre, as well as a large gate on Lon Isa.

You can watch our short film about Rhiwbina Summer Festival here