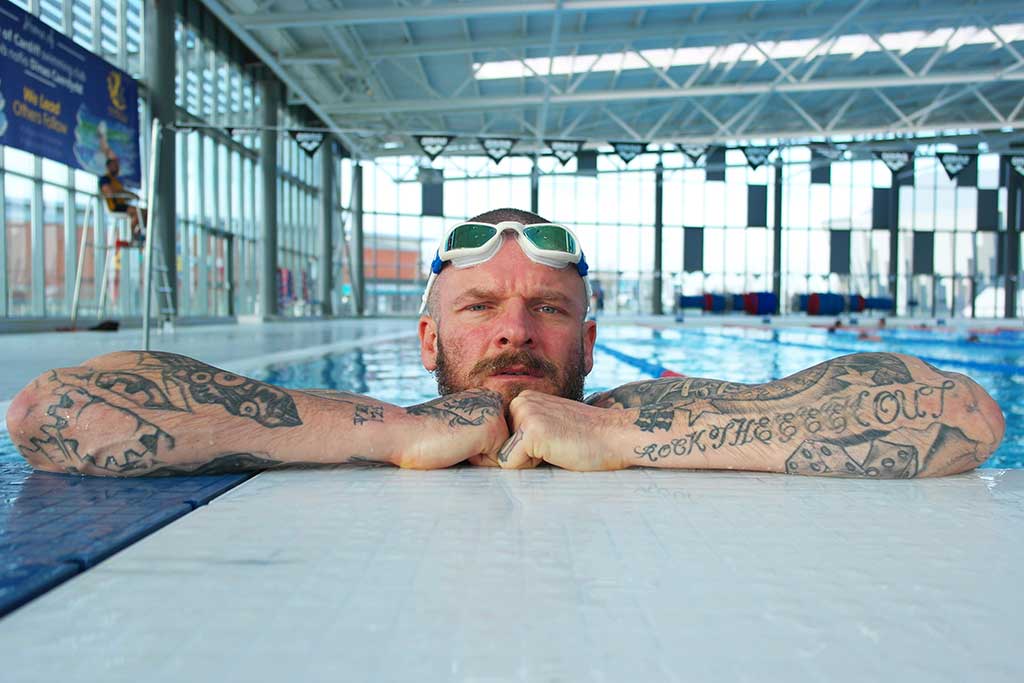 Among the queues of people waiting to get into Cardiff International Pool, Matthew Pritchard cuts an imposing figure. Hood up, and keeping himself to himself, the creator and former star of MTV’s Dirty Sanchez is on a mission.

Throughout March, Pritchard will push himself to his absolute physical and emotional limits. And he’s trying to figure out why he’s doing it.

“I’m thinking back to my childhood in Cardiff to see if I can find out why I keep pushing myself like this. My early years probably played a big part in it all. I remember one of my early schools pretty well because it had mould growing on the walls. I also remember getting a battering from one of the teachers there for doing something wrong. You wouldn’t get that these days.

“I spent 5 years at Glantaf in Llandaff North. My only good memories there were of jumping out of windows with my friend Rhodri O’Neill and exploring the end of the field down by the Taff Weir opposite the Rowing Club. I wasn’t very good in class because all I wanted to do was become a stuntman. I skateboarded constantly too and really enjoyed it. Back in the day though, when I told my teachers that I wanted to become a stuntman, they just looked at me stupid and I was told that thinking like that would get me nowhere. But I became a professional skateboarder, made a living out of it, and from that, clinched my own TV show. You could say that I succeeded in my goals. I never got injured at school although I did almost break my jaw once. I passed there recently and noticed how high the windows were. I wouldn’t do it now!”

Putting on these stunt shows for the other pupils foreshadowed Pritch’s career in adulthood. After leaving school, Pritch became a skateboarder professionally before TV beckoned.

“Then came along Dirty Sanchez. My bank account filled up with money and I found myself with the world at my feet. Don’t get me wrong – I had a whale of a time and partied hard but I did lots of things I shouldn’t have.”

But there came a time when Pritch had to take stock of his life and where he was heading.

“When you look in the mirror and there’s a yellow face looking back at you, that’s when you realise that you have to change – and for the better. It all started when I decided to do the Cardiff half-marathon. A full marathon then followed, including two in London. I did one of them wearing nothing but a mankini. The chafing was awful. But I always wanted to do better, go further.

“The next event was a run from John O’Groats to Land’s End. Forest Gump had nothing on me. I was running 34 miles a day and the nearer I got to my goal, the harder it became. By the time I was finished, I didn’t even have the energy to drink the champagne that had been given to me.

“After the event, I went into a deep depression. I didn’t need to go to the doctors just to be told that it was depression – I knew it was depression! I think it was the fact that I had nothing to work towards once I’d completed my objectives.

“I then got involved with the IronMan UK events. These triathlons consist of a 2.4-mile swim, a 112-mile bicycle ride and a 26.2-mile marathon. All in one go – and without stopping for a break. There’s one up in North Wales which is twice as long and involves going up Snowdon.”

In recent years Pritch has turned his hand to many of these extreme challenges to raise money for a variety of worthy causes, which has ultimately led to the creation of Pritchard’s £100,000 Challenge.

“If I stop and think about why I do it, I think it goes back to my school days. I was always a little bit different to the other kids, and as a result, I got bullied a lot. I was always told that I couldn’t achieve things and I guess that this is my response to them – and to myself, that I can.”

“The good thing about doing this is that I can eat what I want to pile on the calories. I’ll be starting the event on St. David’s Day and ending it on my birthday. I want to push my body to the limit and take it as far as I can go. You will never know what you are capable of unless you take yourself that far.

“The aim is to raise £100,000 for charity. One of my main sponsors is Peter Alan estate agents and I’ll be visiting their stores across South Wales every day.

“Training has gone well so far apart from getting knocked off my bike by a car and breaking my coccyx. I’m ok though. The people at the International Pool have been fantastic. They have given us access to the pool throughout the challenge and have been extremely supportive.”

You can keep tabs on Pritch as he takes on his challenge and make donations at www.pritchards100kchallenge.com.

Donations will be going to Tŷ Hafan Hospice amongst other charities.

You can read our 2011 interview with Mathew here