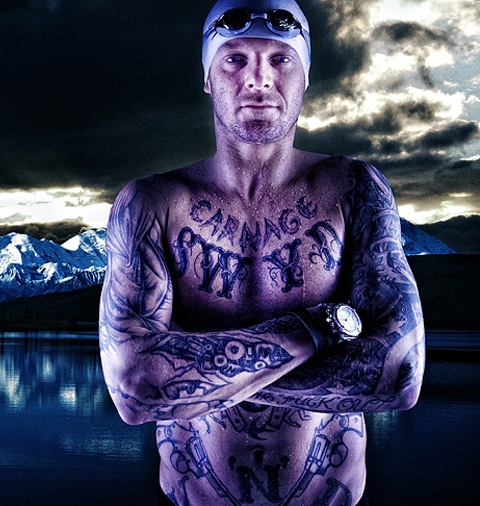 Mathew Pritchard is a professional skateboarder and one quarter of MTV’s Dirty Sanchez Show.

Born in Cardiff and a pupil of Llandaff North’s Ysgol Gyfun Gymraeg Glantaf, Matthew’s career has taken him all over the world. Living Magazines caught up with him before he set off to Ibiza to take part in an IronMan Competition

“The only thing school gave me was a second floor window to jump out of.”

“My school years weren’t the best to tell you the truth. My only good memories were jumping out of windows with my friend Rhodri O’Neill and exploring the end of the field down by the Taff Weir opposite the Rowing Club. I wasn’t very good in class because all I wanted to do was become a stuntman. I skateboarded constantly too and really enjoyed it. Back in the day though, when I told my teachers that I wanted to become a stuntman, they just looked at me stupid and was told that thinking like that would get me nowhere. But I became a professional skateboarder, made a living out of it, and from that, clinched my own TV show. You could say that I succeeded in my goals.”

Dirty Sanchez, for which Mathew first came to prominence, is one of MTV’s most popular shows. Three Welshmen (and one Englishman) put themselves through pranks, stunts and other painful dares. Originally based in Newport, the show has run for four series, with spin-off shows, a stage production, and even its own movie. Critics first compared the show to America’s Jackass, but fans of the show deemed it more extreme and daring.

“The creation of Dirty Sanchez is a very long story. It was started by myself and [Lee] Dainton over 10 years ago now. The two of us were known in the skate industry as lunatics. We were always getting up to no good so we decided to film it all. We made a video called Pritchard vs Dainton. MTV and a few of the big magazines managed to get hold of it. Next thing I knew, I received a phone call from MTV and the rest, as they say – is history.”

In 2006, Mathew, along with the three other members of Dirty Sanchez, Lee Dainton, Michael Locke and Dan Joyce travelled around the globe doing stunts and pranks that related to the seven deadly sins for Dirty Sanchez the Movie. With Mathew being arachnophobic, the rest of the team usually took advantage of this by doing pranks on him involving spiders.

TV fame changed Mathew’s life – but for the better:

“It’s affected my life in such a big way – but a good way. I’ve been all over the globe, experienced and seen so much thanks to the show. It still continues today and I am very grateful for what it’s given me.” Mathew’s gratitude doesn’t stop there either. Over the last few years, he has become renowned for his charity work. In 2006, he and Dirty Sanchez co-creator Lee Dainton, completed a 192-mile skate from Cardiff to Newquay in aid of Cancer Research Wales. He also cycled 900 miles from John O’Groats to Land’s End in 30 days to for charity.

“I find myself very lucky and privileged to have had a great life and travelled the world. Doing charity work is my way of giving a little back to the people who are unable to do this. I really enjoy my charity work – it gives me a great feeling knowing I’m helping people who need it most. I have a lot of the endurance ideas for the future to keep fundraising which I’m looking forward to.”

Mathew’s caring nature however, got him into a dangerous situation back in 2009 though, when he attempted to break up an argument between a man and a counter assistant in a shop in Norfolk.

“This guy was being asked for his ID and he was getting angry. He said he’d been in prison for two years and had just come out. He was effing and blinding and there were kids there.

“I just grabbed him by the waist and by the arms and pushed him out of the shop. Next thing I know, he slashed down my neck. It all happened so fast.”

Mathew sustained serious injuries to his neck and chest.

“I thought I was about to go to sleep at any point. I was telling my missus to tell my mum I love her,” he said.

“I’m still the same person but it has affected me a little. It was a very DARK time in my life and the whole experience was horrible. I will never forget the look and actions of my girlfriend at the time when she realised what happened to me. It still haunts me to this day. I really can’t explain the feeling when you think it’s all about to end but I was very lucky indeed. I’ve always lived life to the full so not much has changed in my head really apart from the fact that I stay well away from anyone who looks slightly dodgy.”

Mathew is looking to the future though – and for the immediate future, this involves an Iron Man Competition in Ibiza.

“I want to push my body to the limit and take it as far as I can go. You will never know what you are capable of unless you take yourself that far. As long as I’m happy and smiling, I will have a great future. I’m really looking forward to the Ironman considering I did a lot of training for it. Then the month before, I’ve partied my pants off in Ibiza. I guess it just makes it more of a challenge to me!”

Despite travelling the world and experiencing what it has to offer, Mathew still lives in Cardiff and holds his Welsh roots in high regard.

“When we were in school, we weren’t allowed to leave the school grounds. As a result, I was unsure of the area at the time. Now that I’m older, I realise that Cardiff is such a great place to live. The Llandaff area where my school was still sticks in my mind – the BBC is just up the road, you have the Taff Trail plus you can actually walk into the city centre.”

A lifelong fan of Cardiff City, Mathew is appreciative of the Welsh language that was taught to him at Glantaf:

“Going to a Welsh-speaking school was important for me. I still don’t understand why all our schools aren’t Welsh-speaking- it’s disgusting. Wouldn’t it be great if we all spoke Welsh to one another?”

Despite the anarchic style that Mathew presents, there is a core of determination within him that pushes him on.

Last month, he took part in an Ironman competition. His preparation included personal training from Welsh professional racing cyclist and Olympic gold medallist Geraint Thomas MBE. Again, this is for charity, and again, Mathew is grateful.

“I feel very privileged and grateful to have Geraint’s support and experience in helping me with the cycling part of my Ironman challenge. Considering it’s the main part of the challenge it will help a great deal.”