Sat among his walls of editing machines in his home office, former BBC editor and film-maker Harley Jones has a smile on his face.

Walking into Harley’s editing suite is like stepping into a living museum display. VHS players, 8mm players, reels and posters are all carefully laid out – and all with a purpose.

“I knew exactly what I wanted to do when I was a kid. I wanted to be in film and television right from the very start.

“When I was a youngster, I was already making films as an amateur. I hired some young actors and with a 16mm camera, we headed off around Cardiff and the Valleys to make these mini-dramas. It was all a bit of harmless fun but ultimately, they were my passport to a professional career in film.

“I came to Cardiff from Bridgend Grammar School. I started work at TWW (ITV Wales) as a trainee before moving to the BBC as an Assistant Film Editor. In those days, it was all about film reels and a pair of scissors. At the age of 18, I was the youngest editor at the BBC at that time. I guess I was in the right place at the right time.

“I was lucky that I worked for John Ormond. He was a director and producer of documentary films, including studies of Ceri Richards, Kyffin Williams and Dylan Thomas. You learn a lot from people like him.

“I then met my now-wife Viv at the BBC and we were invited to work for Scottish TV at Thomson House in Cardiff’s city centre. It was a funny old place, full of corridors and offices.

“I worked with John Grierson, who was one of TV’s true pioneers. He was the first person to coin the phrase ‘documentary’ in 1926, and in 1929, made the film Drifters. In 1935, he was producer on the classic film Night Mail, a documentary about a London, Midland and Scottish Railway (LMS) mail train from London to Scotland. The poet WH Auden and composer Benjamin Britten also collaborated on the film.” 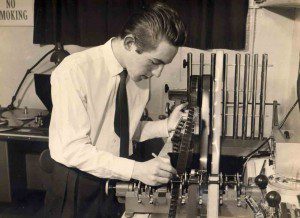 Working with such talent taught Harley a lot about film-making. He, in turn, was then able to pass on his knowledge and skills to others.

“I set up the first film school in Wales, in what was known then as the Newport School of Art. I spent 18 years there. It will be celebrating its 50th anniversary this year. Film editing has come a long way in 50 years. These days, you can film and edit everything on your mobile phone. You have to remember that TV was an expensive medium back in the sixties. We had to carry a lot of equipment around when we were making films back then. I still have those films and some of them have been selected to feature in the Welsh Film Archives.”

The art of editing is still an art that has to be mastered.

“To make a successful documentary, you need to gain the confidence of your subject. You need to forge relationships with them and be friendly to them.

“You also need to remember that as a documentary maker, you don’t work to a tight script. You go into it with ideas and it’s then left to the editor to create the storylines that the audience can follow.”

Always learning, Harley moved on from the film school to become go freelance.

“I became an independent producer for S4C for a while. Not being a Welsh speaker, I had to take an intensive course which was quite challenging but it all paid off. We made a diverse range of programmes – things from Welsh choirs, narrow gauge railways – anything that was of Welsh national interest. 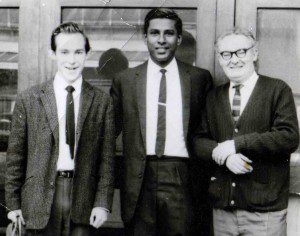 Harley with filmmaker/poet John Ormond (in specs on right of frame). The man in the centre is a filmmaker from Sri Lanka – winner of big prize at Cardiff Commonwealth film Festival.

“You’d be surprised at the amount of talent that’s hidden, even in our villages. Even along the street where I live, there are working film makers and producers. Until you start scratching the surface, you don’t really know the kind of people are nearby.”

After living in Llandaff for over 20 years, Harley’s passion has spilled over into community life elsewhere. He has played an active role with other volunteers in setting up a community cinema in Rhiwbina where he now lives.

“Monico Memories has really taken off in Rhiwbina. We’re still feeling our way a little bit but it’s great to see that the film industry is still as popular as it used to be. We went to visit a similar project down in Hampshire recently and they’re pulling in twice as many people as we are but we’re not about big crowds. For a start, we can’t find anywhere bigger than Canolfan Beulah but that’s fine with us because we’re finding it a great venue.

“We originally set up to showcase specialised films but lots of people are wanting to see mainstream films. We’re still working on our programming but we think that we’ll soon be where we want to be.” 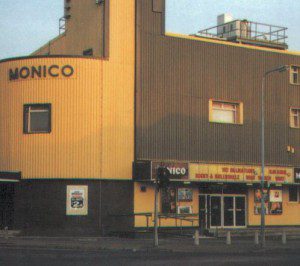 The Monico cinema in Rhiwbina was a local landmark

The Monico cinema of course, was once a landmark of North Cardiff. For decades, it entertained the people of the city and the valleys. Its name still trips off the tongues of locals, and its demise in the early 2000s was seen by some as a travesty. The Monico cinema on Pantbach Road will forever be etched into the minds of film-goers both old and not-so old.

As for Harley, he’s still doing what he does best through his own company, Celtic Films.

“I still do a certain amount of editing and I also do a lot of transferring old film reels onto DVD.

“It’s an absolute joy to still be working with film. I’m so lucky to be able to do something that I love.”