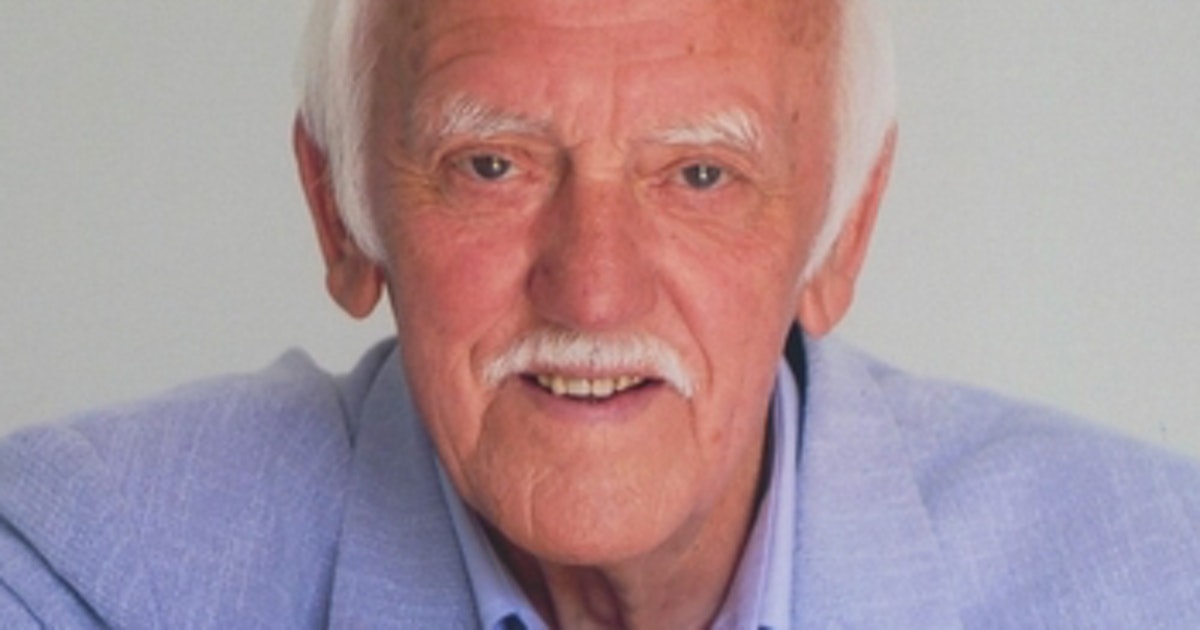 ‘All-round entertainer’ is a term that’s perhaps overused these days. Yet Rhiwbina resident Stan Stennett MBE can rightly be justified to claim this title – and is still performing after 50 years in showbiz.

The star of stage and screen, pulls open one of the filing cabinets in his office at his Rhiwbina home. “Where do you want to start?”

Well, where do you start? The scrapbooks start at ‘early 1950s’ and span over half a century of showbiz. The pictures and flyers on the wall paint just part of the story of one of the finest all-round entertainers to come out of Wales.

“I lost a lot of memorabilia when my house burnt down in 1999. It was then – stood looking at what was left of my house that made me think. The memories came drifting back to me on the smoke coming from the smouldering ruins of my home. The names. The faces. The laughter. All the things I had experienced throughout my long career.”

Stan points to one of the posters on the wall.

“Over here is a show I did with Morecambe and Wise. They played second fiddle to me on that one. And this is another show I did – there’s Ronnie Corbett at the bottom of the billing there look.”

An established career it is. And it all started when Stan was still a youngster.

“It wasn’t long after leaving school before I had to start working. I had a job driving for Pickfords but by then I’d managed to get myself a part in an American group called the Modernaires. I would be up at 3am to do my deliveries for Pickfords and then perform in the evening with the band. If you wanted to get anywhere in those days, you had to put the hours in.”

The outbreak of WWII saw Stan join the Royal Artillery on a driving course. He was then posted to Belgium where he transported troops.

“After the demob, it took a while for the armed forces to get home where they belonged. As entertainers, we were sent all over the world to keep up these people’s morale. I was touring back then with people like the Max Miller, Spike Milligan and Charlie Chester.

“Eventually, the world settled into relative calm and I got a lot of work here in the UK. Back then, I was a solo comedian, using a trumpet and guitar.

“There were a lot of big American performers coming over here who I worked with stars like Johnny Ray, Chico Marx, James Cagney, the Deep River Boys and Billy Daniels, who became a good friend of mine.”

Stan seems almost embarrassed at the list of legendary names he’s worked with.

“I’m sorry. It does sound awfully big headed doesn’t it, mentioning all these names but it’s not like that. It’s just the way it was. I didn’t ask for it to be that way.”

Stan topped the bill in major theatres across the country in the 1950s and 60s, performing with legendary names such as Morecambe and Wise, Ken Dodd, Ronnie Corbett, Jimmy Young, John Pertwee and Joan Turner.

“Eric Morecambe especially became a very good friend of mine. It was a friendship that lasted literally a lifetime for Eric – Eric and I had just completed a show in Tewkesbury when Eric collapsed and died. He was 58.”

In the 1980s, Stan became a household name playing the part of Sid Hooper in TV’s Crossroads.

“I played Sid for seven years. I had in fact been in Coronation Street previous to that. I was Hilda Ogden’s brother.”

It was 1999 when Stan was woken one night by his wife Betty.

“It had been the last night of our pantomime in Carmarthen and we had got home late. There had been a power cut earlier that night due to a storm and at about 4am, the power came back on with such a surge, that it burnt the box connector. Our house was badly destroyed and I slept outside on the drive on my own for three months in a caravan. I felt that I had to protect what was left of my home.

“I had come to Rhiwbina back in 1960. The house was pretty new then and it is again now since its rebuild.” One can’t help but notice the model planes, pictures of Spitfires and warbirds on display in Stan’s office.

“The planes? I’ve been flying for over 50 years.” Stan shows me a photo of himself giving flying lessons.

“This is Jeremy Bowen’s dad,” he says, “and I remember taking Tommy Cooper up in my plane once. “He’d collared me when he heard of my new hobby and asked me to fly him to London on business. He’d never been in a small aircraft before and we had many a laugh as he wasn’t sure what to expect.

“It was a wonderful release to be up in the clouds away from the pressures of performing twice-nightly on stage.”

Flying is a hobby that continues to this day. What is also striking is that Stan continues to work now in his senior years in much the same way as he did at the start of his career.

“I’m still producing and performing; still lugging equipment around the country in my van. I still feel that I still have something to give and so I keep on going.”

Stan’s shows are still as popular as ever, especially with the older generation who remember the ‘good old times’. His shows aim to bring back memories with Wales very much at the fore.

“Nostalgia plays a big part in people’s lives. When you’re young, you’re building memories and you don’t give it a second thought. Then there comes a time in everyone’s life – a point where you start looking back at those memories. The shows I produce take people back to a time that they loved -they bring back memories of people, places and good times.

“We have some wonderful audiences – they sing along and get involved. And it’s nice to know that I can help cheer these people up – some who hardly ever get out of their houses.

“When I perform, I imagine that I am speaking to just one person – and that person has been there all these years. You single them out. You make them feel special.”

Stan still feels that he has lots to do. The shows, the charity events, the golf.

“More recent work has seen me film with Lee Evans and Christopher Walken, but most of my work these days are the traditional shows that people seem to love.”

Stan’s drive to keep people entertained and happy is recognised in the friends that he makes. He picks up a cigar case. The inscription on the side reads:

To a very good friend. From your pal
Lonnie Donegan

Stan passed away in November 2013.