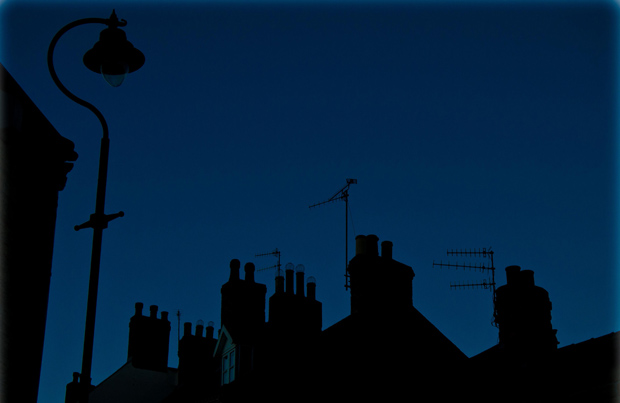 Beth is lying in bed.

The rain’s been hammering at the window for the last hour and shadows drape their thin fingers across her bed.

She rolls over to look at the digital clock.

Only three hours until she has to get up for work. It’ll still be dark at that time. Summer has long gone and the autumn storms are rattling the old Llandaff house. The wind roars round the wet roofs outside, raging through the trees and off down the dark roads. It comes rumbling and tumbling down the chimney and past the bricked up fireplace in the corner of Beth’s room, down into the old kitchen below.

And she can’t sleep.

She’s thinking of the generations before her who have lay sleeping in the same lightless room, listening to the same storms raging outside. Those old men with their Victorian moustaches. Those old women that you see in the old daguerreotypes, wearing their black gothic dresses and hats. The old photographs she had found when she moved into the house a few days ago has got her thinking.

Finally, she pulls back her duvet and sits up. Can’t sleep. The floorboards are cold to the soles of her feet. She slides her feet into her slippers and stands. Then she takes her dressing gown from the back of her bedroom door. Puts it on. Heads out of her bedroom and down the dark staircase.

Arriving at the kitchen, she flicks the switch. The strip light fizzes and flickers into life. The air feels cold. Beth shuffles over to the window. Fills the kettle with some water. The old Victorian taps grind and groan. Switches the kettle on.

With a yawn, she picks up one of the old photographs from the box that she’d found a few days ago.
The asthmatic kettle snorts and breathes. Beth holds a photograph closer to her face. Two adults sit either side of a young woman on a bed. The parents look slightly blurred, each wearing dark heavy clothing. They look concerned. The young woman, face crystal clear looks into the distance. Her eyes look glazed and ahead, her head tilted slightly. Her hands are clasped tightly in front of her. And behind them sits some kind of cabinet, draped in a heavy white sheet.

Beth drags her eyes across every detail in the photo. From the embroidery on the blanket that covers the young woman’s bottom half, to the blur in the older man’s eyes. It’s a strange photo.

Then, without warning, there’s a warm breath on the back of Beth’s neck.

She gasps. And spins around. The letters on her pinboard stuck on the wall rise and fall. Nothing there.
She grasps the back of her neck and runs her hand down her nape. It tingles right down the base of her spine.

Kettle whistles and Beth moves towards it, still roving her eye around the kitchen. Places the photograph on the work surface. Then plops a teabag into a cup. Pours on the boiling water. Pulls her mobile phone out from her dressing gown pocket and dabs her thumb on the screen. And for a moment, she loses herself in the world of Facebook foreigners and insomniacs. She clicks on a photograph of her friend Sarah with her parents on holiday in Mexico. Beth smiles. Sun. Beach. Cocktails. Wishes she was there.

What Beth doesn’t notice is the ghostly pale face of a young woman peering over her shoulder at the phone.
There’s a sudden clatter from the back door. The noise startles Beth and goosebumps fizz down from the crown of her head to the ends of her toes.

She slips her phone into her dressing gown pocket, clasps the collars together and steps over to the back door. Sounded like lid of the metal bin. She decides to leave it. Probably get wet.

The tea has stewed in her mug. Beth opens the drawer, takes out a small spoon. Dips it in the mug and drags the hot teabag out. With a flick and a clunk, the bag disappears into the bin.

She scoops up the handful of old photographs and sits at the old wooden table with her black tea. Picks another one up. And looks closely.

A young boy. About ten years of age. Lying in bed. Asleep. He looks peaceful. Like the others, he wears heavy black clothes. In bed. His white shirt collar is buttoned up tight to his chin. But he doesn’t look in any discomfort.

The next photo. Two parents. In black. And a sleeping baby nestled in a huge nest of white shawls.
Next. A old man with a beard. In a wooden chair. Head to the side. His eyes look white. Like he’s wearing contacts. Weird. Why all these photos of people asleep?

The kitchen window rattles violently. Beth turns to see. Out in the dark, the trees arch backwards, throwing their skeletal limbs wildly. Beth turns back to the photos. At the window, another ashen face, with a faded grey beard, steps up and stares in.

Beth shivers with the cold. The kitchen is not the place to be this time of night. What was she thinking? Bed was so warm.

She stands. Picks up the photographs and heads out of the kitchen. Turns the light out.
The face at the window still peers into the dark kitchen.

Beth climbs the stairs. Carefully. She once slipped carrying a cup of tea and scalded her leg.
Reaching the top of the stairs, she flicks off the light downstairs and shuffles to her bedroom. At the foot of the stairs, silently looking up from the darkness, stand a man and woman. The woman carries a sleeping baby in her arms.

Beth takes off her dressing gown and hangs it on the back of her bedroom door. She places her tea on the bedside table and quickly scrambles into bed. Sits up and pulls the blankets up tight under her arms.
In front of her, she holds the photos. She’s still intrigued. Something’s not quite right about them. Her eyes linger on them. Lingers on the awkward poses. The heavy clothes. The strange expressions. None of them smile.

She places them to one side of the bed and picks up her tea. Warms her hands on the mug. Stares ahead. Mind wanders to work tomorrow morning. Takes a sip and places it back on the bedside table. Nestles down into her bed.

It’s only a matter of minutes before her eyelids close. The photographs fall and scatter on the floor face down. The brief flutter stirs Beth, but not enough to wake her.

In faded grey handwriting, on the back of one photographs reads the words.

Outside, the dark rain clouds scuttle quickly across the night sky and move on to another sleeping town.
Inside the house, Beth briefly rouses then slinks down under the duvet. She rolls over to face the window.
In the dark corner of the room behind her, among the shadows, stands the figure of a young boy.

Heavy black clothes. White shirt collar is buttoned up tight to his chin.