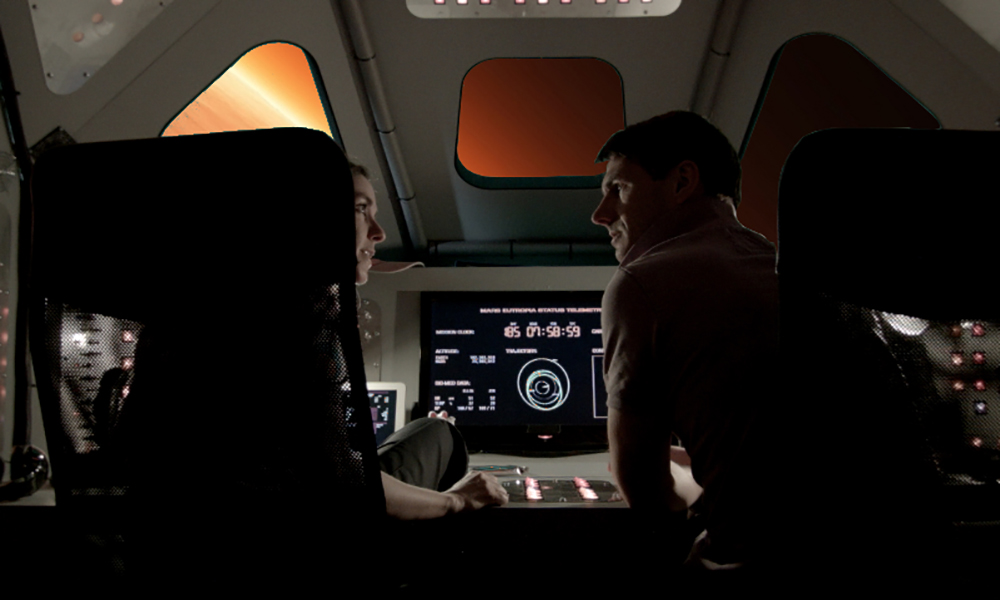 Laurence Patrick stands in the kitchen that he designed. He takes a sip of freshly-brewed coffee from his mug and looks up.

“I’m a Child of Apollo,” he says. “One of the very first things I saw on TV was a man walking on the Moon. For me, it all seemed very normal. As a kid, I didn’t realise the enormity of it all – I thought that this sort of thing would continue forever. Of course, the Apollo missions to the Moon were cancelled in the early 1970s and no one has been back since.”

Like most people, space travel has been out of reach for Laurence, which is why he brought space travel into his home. Into his attic space to be more precise.

“I’m an Architectural Designer by day and I design homes. I’ve designed attics for some of my neighbours but on this particular occasion, I needed something a little bit special in my own home.”

The sci-fi fan and film-maker had written a short film about a space mission to Mars. And after discounting various sets that were not feasible, Laurence decided to turn his own daughter’s attic bedroom into the cockpit of a spaceship.

“I’d spent a good deal of time looking for an aeroplane cockpit to use. We got in touch with Dunsfold Aerodrome – that’s where they film the TV show Top Gear. I was sent some photos but told that it would be £2,000 a day to use it. We tried Cotswold Airport, where they offered us a decrepit plane before I headed down to St. Athan where I met a great guy who said that there were some planes available. Things didn’t quite work out but crucially, I was able to take some measurements that proved vital later on because I’d had an idea of my own.”

Laurence’s idea was bold. And probably a bit bonkers. But it worked a treat:

“Our daughter Evie was looking forward to moving into her attic bedroom so I pleaded with her to give me a few weeks. I started constructing the set in January and it wasn’t until May that we finally got to start filming.

“As we couldn’t use a real cockpit, I used the measurements I’d taken at St. Athan to good effect. You won’t see this on film but behind the MDF framework was a trail of wires. I picked up most of the buttons and lights off the internet and we added green windows so that we could superimpose exterior shots of space on them in post-production. An old Playstation served as one of the main monitors and the rest was made up from bits and bobs that we could find.”

Several months later, with the set fully complete, Laurence, co-star Hannah and the crew were ready to roll the cameras.

“We started on a May Bank Holiday and we’d forgotten that it was a bank holiday. Our neighbour thought he was seeing things when he popped his head out of his skylight and saw two astronauts on the roof next to his. We filmed for 5 days with one extra day for ‘earth’ shots that we used for flashbacks.

“As it was an attic space, it was obviously very cramped. It was also pretty hot at times as we were filming in May. We’d run a shot and then fling open the skylight window to get some air in. We had one day of rain that impacted on us slightly because of the noise it made on the roof. Other than that, the set served its purpose and I was pretty happy with the outcome, especially since we were doing it all on such a limited budget.”

The attic stayed in place until Laurence was happy that he had all the shots he needed before he took it apart. 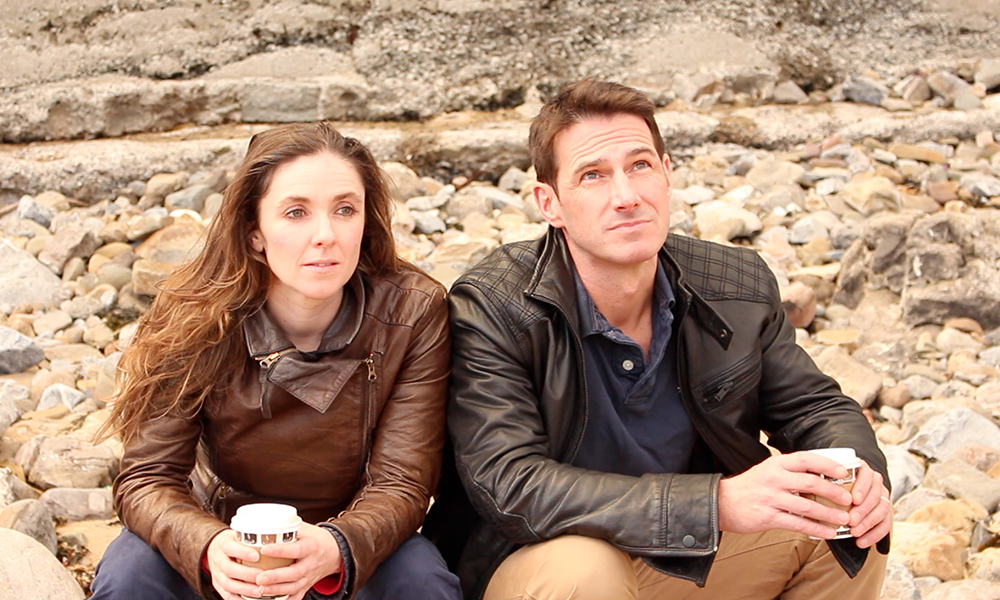 “My wife Jane and I had lifted the large panels up to the attic via a series of ropes and pulleys as they were too large to go up and around our stairs. I kept the cockpit where it was for a few weeks so I could use it for pick-ups but before long, our other daughter Martha came back and she had to sleep in it as it was. It was a case of dismantling the set in the same way as we’d put it up – out the window and down the ropes into the garden.”

The inspiration for the film was actually a newspaper article Laurence had seen a few months earlier.

“I don’t buy newspapers very often but this one weekend, I picked one up and I was sat in the kitchen reading it. I came across an article and the headline was something along the lines of ‘Astronauts would have to use own waste to protect themselves on way to Mars’. It doesn’t sound like a particularly glamorous headline but it got me thinking. Then there was a feature about Dennis Tito, a man who funded his own trip into space. These people fascinated me and were the real inspiration for the story.”

Laurence’s idea for a sci-fi movie began to take shape but without a big budget to work with, he had to think creatively about how his film would develop:

“Tito spotted a free return trajectory from Earth to Mars that would take 501 Days – if you left Earth early in January 2018. The astronauts would be able to do one loop around Mars and be back on Earth by May the following year. I had a micro budget for my film so I couldn’t go adding huge special effects, even though it was essentially a sci-fi movie. My story had to be more of a human drama so I had to put my two characters into jeopardy to bring the story alive. Putting them into the isolation of a spacecraft on a long journey meant the movie was more of a psychological thriller than anything.”

Ultimately, Laurence has managed to draw human drama from just two characters and a tense storyline.

“I always remember a quote from Cosmonaut Valery Ryumin, who wrote in his personal diary in 1980: ‘All the necessary conditions to perpetrate a murder are met by locking two men in a cabin of 18 by 20 feet . . . for two months.’ But what I’ve learned through my experiences is that short films need to be positive. My first film was a very miserable one and I’ve seen a lot of short film makers doing the same thing. It’s almost as if they have to get it out of their system before they can move on to other things. I think it’s because they want to show that they can emote – that they can do the dramatic stuff – the tears and the anguish. But my view is that movie goers like to watch a good story.”

At 25 minutes long, 501 Days was too long for most short film festivals, especially with two unknown actors.

“We did get selected for the Ouchy Film Awards in Switzerland and a festival called the Lost Sanity Horror & Sci-Fi Film Festival last year. We’ve also been selected for the Manchester Lift-Off Film Festival Online in late March. After that, I’m looking to take it to the Carmarthen Bay Film Festival in May. The movie will then be available to watch online following that.”
For the architect-come-actor, performing is part of who he is:

“I do stage work too. Acting’s in my blood. As a kid, I appeared in a HTV Wales drama. I remember my drama teacher saying that I should look to go to drama school but as I got older, I was far more interested in spending my days windsurfing. It was only years later when I took my daughter to an actor’s workshop that I got involved once again.

“I now do stage work but acting for me is something I prefer to dip in and out of. I remember seeing Jude Law in a version of Hamlet and he had that acting ability just oozing out of him. Acting professionally is a totally different way of living – something I don’t think I could ever do.”

For now at least, Laurence is happy with what he’s achieved.

“If I had more time and more money, I’d probably look to do a feature film. My short movies are a creative outlet for me. I don’t make any money from them but they do allow me to express myself.”

501 Days was shown at Rhiwbina’s Monico Movies in March.

“We’ve lived in Rhiwbina for 14 years now and it was therefore a pleasure to have my movie shown locally,” he says.

Laurence has certainly proved that where there’s a will, there’s a way and that there’s a story worth telling behind every door in Rhiwbina.

You can see more of Laurence’s work at www.paganfilms.co.uk