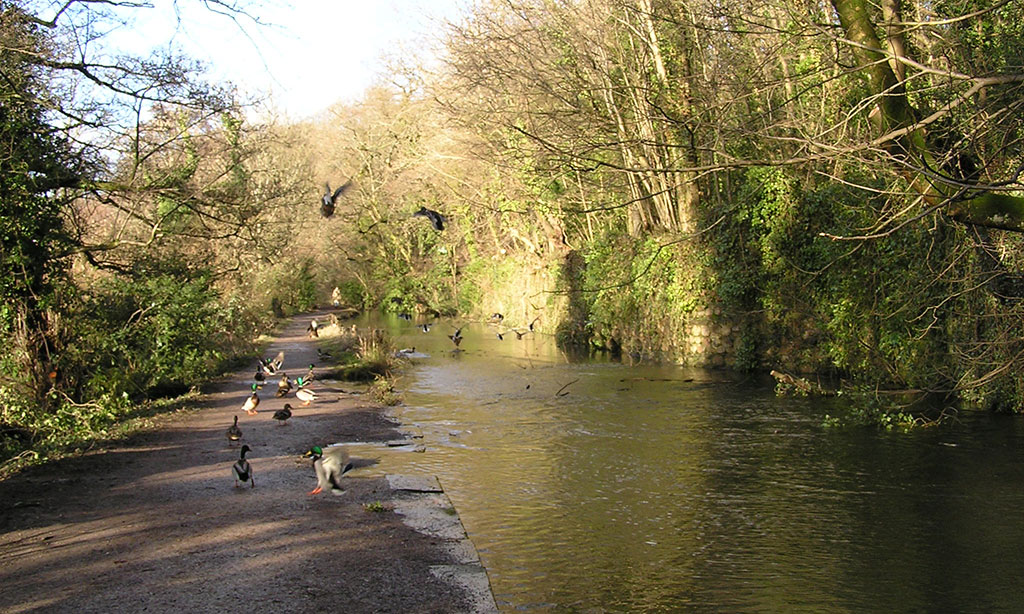 The once mighty Glamorganshire Canal now exists mostly in history books. Steve Strange charts the rise and fall of the canal’s prominence and explains where locals can go to catch up with our past.

In 1794 a canal was opened between Cardiff and Merthyr Tydfil over the mountains of South Wales. This was considered one of the Seven Wonders of the World at the time. Within 24.5 miles, it rose to a height of 300 metres, requiring 49 locks. When the canal was opened in 1794, Cardiff had a population of just 4000. In 1798 the canal was extended one mile seawards and included a sea lock. The total cost to build the canal was £103,600.

The hills and valleys surrounding Merthyr were rich with limestone, iron ore and coal. The canal predominantly followed the route of the river Taff and was able to carry these raw materials and finished goods from the four Merthyr ironworks far more cheaply and quickly than previous mule trains. Merthyr was the largest town in Wales in 1850. It was twice the size of its nearest rival Swansea, and greater than the combined populations of Swansea and Cardiff. Merthyr’s growth was brought about by the expansion of the iron industry- it was the industrial heart of Wales.

The four great ironworks – Dowlais, Penydarren, Plymouth and Cyfartha were able to transport their finished iron on a single barge nine feet wide and 60 feet long. 24 tons of iron could be towed by one horse, needing only one man and a boy to run it efficiently. Three round trips to Cardiff could be completed in a fortnight. Previously this tonnage required 48 horses, 12 men and 12 boys and would take significantly longer.

Despite the railway boom of the 1840s and the opening of the Bute docks in Cardiff, the canal continued to flourish. The Industrial Revolution, especially the coal boom in South Wales, saw unprecedented growth of trade on the canal. In 1858 at its economic peak the canal transported 466,983 tons of coal. Within a decade this had slowed considerably. The canal was a victim of its own success. The trade boom and subsequent congestion was the primary cause of its decline.

Richard Crawshay, owner of the Cyfartha Ironworks, had the canal built to his ironworks in Merthyr. He then vigorously opposed all efforts by the Hills, Guests and Homfreys – owners of the other Merthyr ironworks on the eastern side of the valley – to extend the canal or allow feeders to be built. This eventually led to the setting up of the Taff Vale Railway Company by the dissident ironmasters to transport their wares to Cardiff. By 1888 the canal was owned by Lord Bute. Lord Bute planned to use much of the canal on which to build a railway. Its economic life was effectively over, although sand dredgers and timber floats carried on using parts of the canal until 1942.

Very little remains of the canal in Cardiff today. The exception is the Glamorganshire Canal Nature Reserve at Coryton, adjacent to junction 32 of the M4 some five miles from Cardiff Docks. The one-kilometre stretch of the canal was lovingly restored in the 1960s. The restored canal section is the new jewel in the Forest Farm Country Park. The Country Park was established in 1992 by the Countryside Council for Wales. The Park contains a designated local nature reserve, a site of Special Scientific Interest (including the restored canal section) and an adjacent semi-natural woodland, known as Longwood.

The Nature Reserve is a popular location for ramblers, ornithologists, dog walkers and joggers. The spectacular kingfishers glimpsed frequently along the canal are perhaps the most enchanting of all the wildlife to be seen. Little grebe, dippers, snipe and water rail are among the varied birdlife to be found here. Along this beautiful and tranquil stretch of water can be seen the unique iron bridge, built here in 1851. It is unique because one turret is rounded, the other square. Sunny Bank River Bridge enabled the ropes from horse-drawn barges to pass over the bridge without snagging. The bridge was built to allow overflow from the canal to pass into the Melingriffith feeder supplying the nearby iron works of the same name. The Melingriffith Pump is currently being restored to its former glory and is due for reopening this summer.

Remnants of the canal can be traced throughout Cardiff today, although only this mile-long section at Coryton remains intact. The popular Taff Trail cycle path, running alongside the River Taff as the canal once did, is now an energetic cycle route from Cardiff Bay to Brecon. The Taff Trail follows the old canal route in many places along its 27-mile length. The Taff, which once flowed black with coal, is now clean and rich in wildlife, including salmon and trout. The return of the fish attracts herons and cormorants to feed along the river banks.

The Glamorganshire Canal is widely credited as being the catalyst that sparked the huge growth of the City of Cardiff. This growth continues at pace today. Cardiff is officially Europe’s fastest growing capital city. Its population now dwarfs that of both Merthyr and Swansea.

The restored section of the Glamorganshire Canal provides a wonderful example of what can be salvaged from industrial decay. The canal lock and unique bridge are a fascinating reminder of our recent past and rich industrial heritage. The canal contains an abundance of wildlife and is a superb advert for the current interest in restoring sections of long-derelict canals. How the Cardiff Bay Development Company must regret the filling in of large sections of the Glamorganshire Canal in the 1960s. The restored waterway would have been the ideal linking artery from the city centre to the now thriving Cardiff Bay.