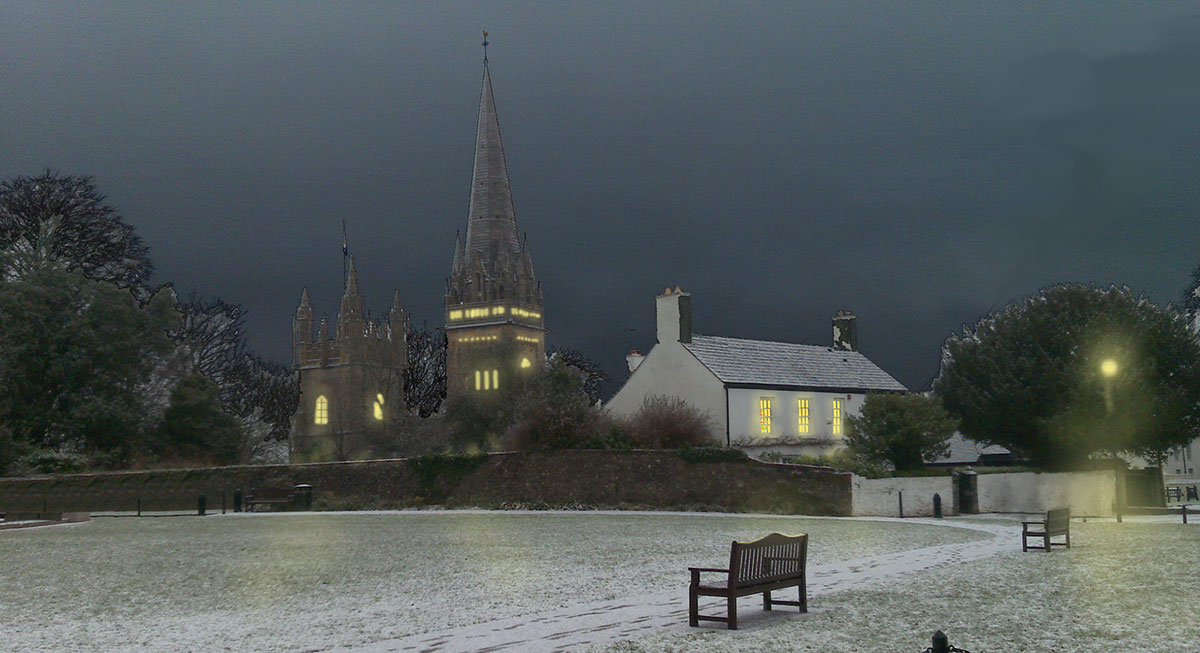 This short story was first published in our Christmas issue of Whitchurch and Llandaff Living in 2010.

The old man made his way slowly up Llandaff High Street.

It was getting dark and the hustle and bustle of Christmas Eve shopping had subsided. Shopkeepers were closing their doors early, rolling in their awnings and pulling down the window sashes. Snow had been forecast, and they were keen to be home with their loved ones before it set in.

The old man was certainly dressed for the cold. His hands were buried deep in his long grey coat, and his winter hat was pulled down well over his face. An expensive-looking scarf was wrapped around his neck, and served to stop the biting wind from getting to him.

But he seemed in no rush. He had been here before. A long time ago though. And he hadn’t stopped. He’d wanted to come back for many, many years. This year was the first year that he was free to make the journey.

Looking around the street, he watched as the shop-keepers rushed to close their shops – an empty restaurant with a lonely looking manager peering out of the window; the last of the glamour girls coming out of the hair salon; and the middle-aged woman totting up the day’s takings in the gift shop.

People were heading into the glowing warmth of the Butcher’s Arms, embracing each other on the door before heading inside for the evening.

The man smiled to himself. Approaching the top of the street, the man noticed a flower shop. The lights were on and it still looked open.

Steadying himself, he ascended the steps, opened the door, and stepped inside the shop.

“Hullo!” said the young girl behind the counter. She was finishing off a large display of red and white flowers.

“Good evening,” replied the man. His voice was quivering. The girl couldn’t tell whether it was the cold or his age that contributed to his fragile voice.

“Anything I can help you with?” she asked, pushing down another flower into the vase.

“Erm…I vaz ‘oping zat you might have….errrr…what you call?….errr a reet.”

The man gestured a round bouquet of flowers.

“Well I’m afraid that we don’t have any of those left and it is too late to make one up for you as they take some time.”

“Oh. Oh. Erm….” He looked around the shop. The containers of flowers were mostly empty. He went on.

“Erm…. Do you have anything left at all?”

The girl looked around.

An older lady appeared from a small door behind the counter.

“Good evening!”. Her voice was sharp and shrill. She was clearly excited that Christmas was very nearly upon them.

“Do we have anything else apart from these?” asked the girl. “The gentleman wanted something to lay on a gravestone but that’s all we have.”

The older woman thought for a while, then disappeared into the back room. She immediately reappeared with a large bouquet of lilies.

“These were supposed to be collected earlier but no-one has collected them – they’re yours if you’d like them.” She held them out to him.

He took out a small leather wallet and put it on the counter while he counted up the coins in his hand.

“That’ll be seven pounds please,” said the girl, holding out her hand to take the money.

“You’re not from around these parts, no?” asked the girl.

The man chuckled as he counted out his coins.

A short while later, after wishing the staff of the flower shop a Happy Christmas, the man was heading down the steps leading to the Cathedral.

Across his chest, he carried the large bouquet of lillies. A few families brushed past him, on their way to an Evening Carol Concert. As the man approached the Cathedral, he stopped for a few minutes to admire the large building that filled his vision. Then he moved slowly to the semicircular memorial for those lost during the bombing raids of World War II. He stood there.

Carols floated from the Cathedral. He dropped his head. Inside the Cathedral, the majestic organ fell silent. In silence, the man stood there thinking. His frozen breath rose up over his hat and into the cold night.

Then, he lowered himself slowly down onto one knee and lay the flowers at the memorial.

Under his breath, he muttered the words “I’m sorry.”

Suddenly, he found himself surrounded by a group of people.

“Who are you?” asked a man impatiently.

The old man turned. Behind him were three woman and two men, all middle-aged. The man who had spoken moved towards him.

“I asked you who you were,” said the man. His Cardiff accent was strong.

The old man spoke softly. “My name is Henrich. I have come to say sorry.”

One of the women clasped her hand over her mouth.

“I didn’t mean it. It voz a mistake. We didn’t mean to destroy your beautiful building, and most certainly not to kill anyone….I…I…” His voice faded to nothing.

The Cardiff man’s frown melted and he purged his bottom lip up.

“Well….thankyou. Thankyou for coming to say sorry. We were there too. It was a long time ago.”

Up at the top of the steps, the young girl from the flower shop was searching. She grabbed a passing family.

“Excuse me. Have you seen an old man? – long coat, hat. He’s left his wallet in our shop.”

The family couldn’t help, but the girl assumed that he may have headed to the graveyard.

Her guess was right. As she moved quickly down the steps, she could see over the wall. At the foot of the memorial, she could see the old man and the group around him. One by one, they took it in turns to hug him. The old man patted each one of them on the back and didn’t seem to want to let go.

The man kept repeating the words “I’m so sorry.”

The girl got to the bottom of the steps. She moved quietly, not wanting to disturb the group. But as she turned the corner, the graveyard was empty. All that was left was a bouquet of lilies.