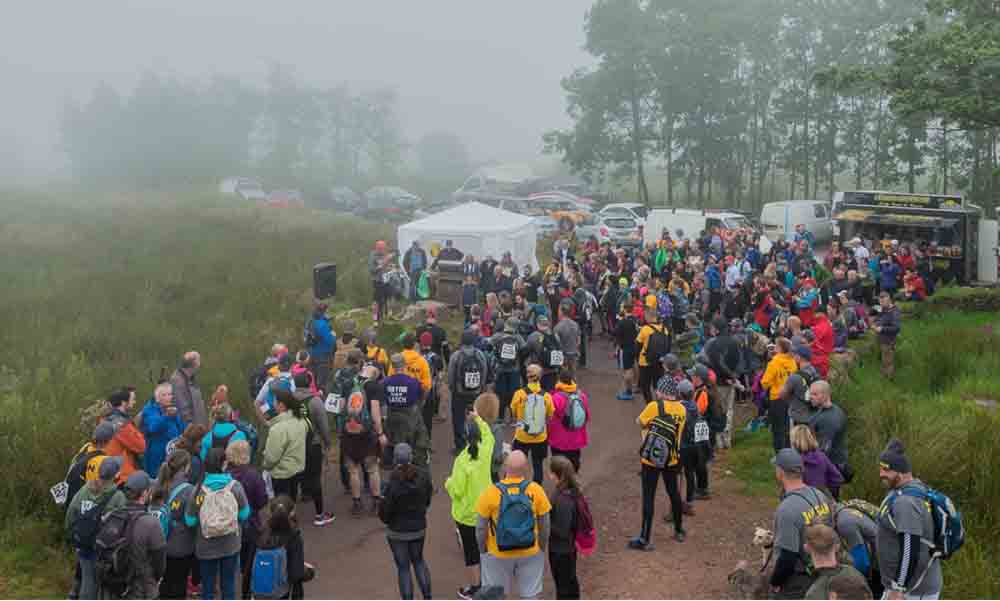 Organisers Steve Western and Lee Gillen take up the story:

“The Ten Y Fan event was created in 2014 to raise money for a boy called Harri, who at just age 4, was diagnosed with a rare form of cancer. Initially Ten Y Fan was intended as a small sponsored event. However, after learning of Harri’s story, many more people wanted to help. The conversation took place in our kitchen and we had no idea it would be so popular. After launching the event on social media, over 100 people joined in to climb for Harri.

“The inaugural Ten Y Fan was amazing and far exceeded all expectations. In addition to those climbing, the event was boosted by tireless volunteers, supporting the climbers and making sure all were safe and the event went smoothly. These included the registration team, manning the tent throughout the night to monitor climbers, and student physios who came along to attend to any aching limbs. Hot food was even provided by Harri’s grandparents, and a local family made hot drinks and soups from their campervan. The Ten Y Fan community came together to support each other during the marathon challenge. Ultimately, 140 climbers took part, with 11 completing the full 10 climbs, resulting in us raising over £10,000!”

The 2016 was even more successful, with over £50,000 raised for the Welsh children’s cancer charity LATCH. They also had 69 people completing the full ten climbs to the top of Pen y Fan, with a large percentage of people doing more than five. To top it off, they held their first award ceremony which went very well. 2016 also saw EE sponsoring the event and Hollywood star Michael Sheen taking on the role of ambassador of the event.

“Michael is a superb role model for the event and is passionate about supporting local charities so we couldn’t be happier to have him support the cause,” said Steve.

The popularity of the event has almost taken Steve and Lee by surprise. And it’s no mean feat arranging and organising, especially when they are always looking to make it bigger and better.

“We would like to raise £100,000 in 2017 and we’d also like to have at least 300 climbers taking part. Organising things like the website, posts on social media, registrations that come in daily, T-shirts and memorabilia, volunteers – that all takes time. Then there are the donations of food, drink etc. from companies to organise!”

The awards ceremony is a chance to pat everyone on the back and applaud the achievements of everyone that participated in the event. It’s a great opportunity for sharing Ten Y Fan stories, while giving out well deserved awards and (hopefully) handing over a huge cheque to the chosen charity.

“Next year we’re going bigger and better. The awards night for 2017 will be held on 17th June 2017 at the Vale Resort at Hensol. The cost is £30 per ticket and promises to be a fantastic night. You will be treated to a drinks reception followed by a 3 course meal and a fantastic awards ceremony with a couple of special films to watch. There will be an auction with some very special prizes and then the final sponsorship monies will be handed to the charities. If this isn’t enough, you can then let your hair down for the 80s disco! We would love to see you there so please book your ticket. Places are limited so please book early,” says Steve.

Dreams & Wishes is a charity dedicated to helping seriously ill children by making their dreams and wishes come true. Since they began in 2011, they have been working with families across the UK, providing vital support throughout the child’s illness as well as helping to build happy memories by granting lifelong wishes.

All You Need To Know

Do I really have to do ten climbs?
Not at all. You can do just one climb if you like – everyone who takes part will receive a goody bag which will have a t-shirt, slate medal, certificate and a Ten Y Fan water bottle with other gifts to be added as well. It’s all about the fundraising!

Do I have to stay the full 24 hours?
No, the event lasts 24 hours, but you may have completed your chosen number of climbs much sooner. Some people may choose to not climb through the night so they go home for a much deserved sleep then return the next day to continue climbing once refreshed. It’s up to you.

How do I take part?
Go to www.ten-y-fan.org and register there. You can also buy tickets for the awards night as well.