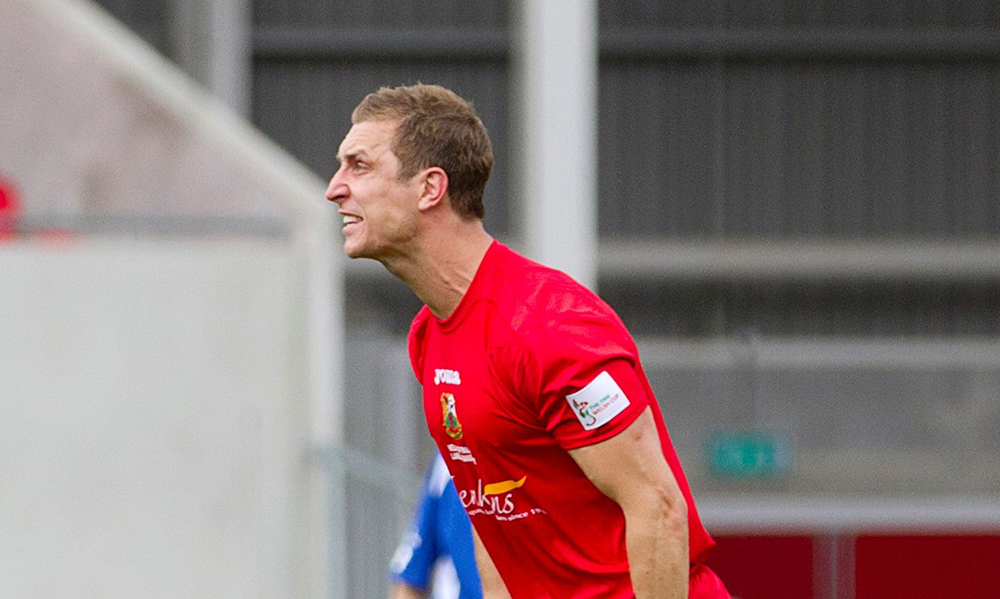 He’s a Whitchurch firefighter and a former professional football player. But now Rhys Griffiths is a published children’s author with his new book Billy’s Grandad and the Search for Horris. This is his story

If you ever hear a fire engine racing through Whitchurch or Llandaff, there’s a good chance that firefighter Rhys Griffiths will be on board.

Rhys is a former professional footballer who has played for the likes of Plymouth Argyle, and has been the Welsh Premier League’s top scorer on seven occasions. A three-time winner of the league’s Player of the Year award, Rhys has also been capped six times by Wales at semi-professional level.

These days, as well as managing a Welsh Football League Division One team in Bridgend, you’ll find him working out of Whitchurch Fire Station.

“I’ve been nuts about football since I was a kid. All I ever wanted to be was either a footballer or a fireman and I’m lucky enough to have done both.”

Rhys’s professional football career started in 2001 when he joined Cwmbran Town. After stints at Haverfordwest, Carmarthen and Port Talbot, he joined Plymouth Argyle for the 2012/13 season before signing for Newport County.

“I helped Newport get to the play-offs at Wembley that year which was nice. Sadly, I was injured by the time we got to Wembley but we defeated Wrexham 2–0 and returned to the Football League after a 25-year absence with promotion to League Two.” 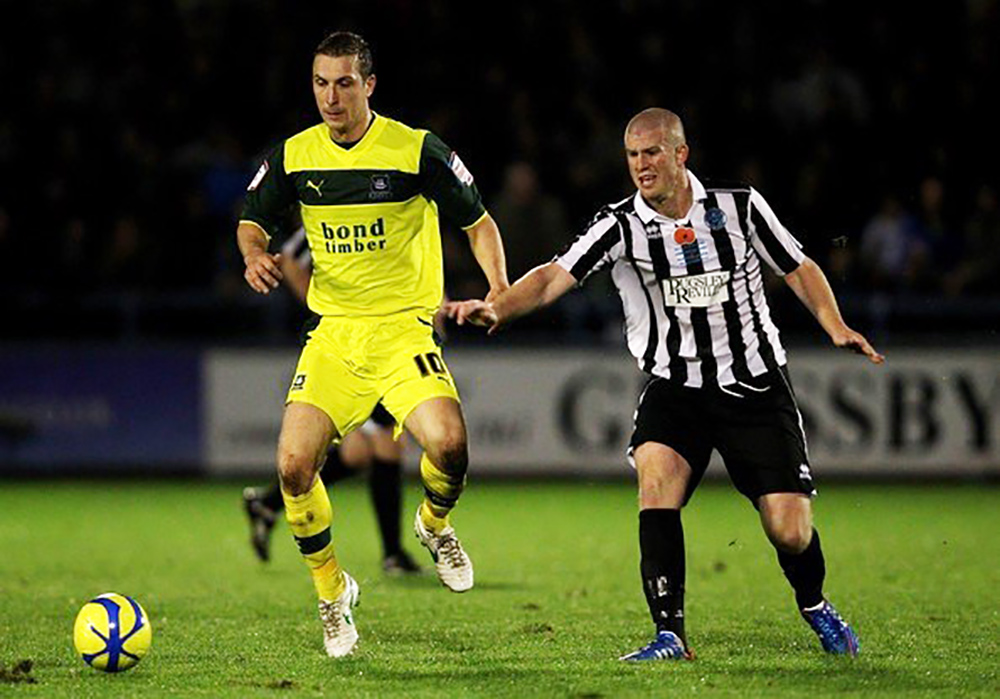 Throughout most of his football career, Rhys has also been working as a fireman, first in Penarth and now based here in Whitchurch.

“I’ve been working as a firefighter since 2005. It’s something I’ve always wanted to do as I like to help people. There’s a lot of variety to the job – you never know what’s going to come next. One minute you could be sat having a meal or writing up a report, the next you’re flying out of the door to deal with a fire.

“I tried getting into the service initially in 2003. There were a lot of strikes on at that time and the application process took about 18 months, a lot longer than it usually does. Worse still, I failed to get in after that long wait and I was left devastated as it was something I was so passionate about.”

Rhys took the rejection hard but inspiration came from two close members of his family.

“It was my grandparents who eventually phoned me a few years later to let me know that the fire service was recruiting again. After the hurt of the previous application, I was very unsure. I didn’t know if I could put myself through that again and be given the same outcome.

It was my grandmother who talked me back into it. ‘Give it a go,’ she said. So I did. And four months later, I was a firefighter. I had my grandfather and grandmother to thank for encouraging me because if it wasn’t for them, I wouldn’t be doing what I am doing now for a job.”

Grandfather William died a few years ago and his death hit all the grandchildren hard as the family all shared a close relationship over the years, especially as Rhys was growing up.
“My grandparents played a massive role in my upbringing.

I always think that there are two types of grandfather – the old grumpy types who are always moaning; then there’s the lovely, kind ones who’d do anything for you. My grandfather was one of the latter. I have so many wonderful memories of him and my nan. She still lives in Rhiwbina.

“I remember him taking me down to his cellar many times and there he’d show me his ‘pet’ spider called Horris. Horris lived for about 25 years and in that time, he changed shape, colour and size. It wasn’t until I grew up and was told that spiders can live for about 2 years that I realised that Horris wasn’t in fact one spider, but a series of spiders over the years.

“My grandad died aged 82 but had been fit and healthy all of his life. He served in the Army and did a lot with his life, something I’ve always tried to emulate.”

Rhys has made sure that the memory of William lives on. In a series of events over the last year, Rhys has managed to become a published children’s author – and his book has been dedicated to William’s memory.

“I’ve got a photo of my grandparents up in my house and my two young boys kept asking about it. I felt that I needed to give my kids some context to the people in the photo.

“One night, I was putting the kids to bed and instead of reading them a usual story, I recalled the time that my grandfather took me down the cellar and showed me his pet spider Horris. A few nights later, my son asked me to tell him the story again so this time I had to write it down. I retold the story several times a week so I started creating drawings on my iPad to go with it. Within a few weeks, I’d created my first book.

“It was obviously a rough version but my kids loved it and I thought about getting it published. Eventually, I got in touch with a publishing house who said that they’d put it in their catalogue. The book needed a complete revamp though so I worked with the publishing house to get the book ready.

“The entire process took about 6 months. There was an editor working on the text and I also worked with an illustrator, which was my favourite bit. I’d draw a rough version and send it off and I’d then get a professional version sent back. Every time the pictures came back to me to look over, I got more and more excited. It was great seeing the images that I had in my head coming to life.”

Rhys had the most ardent of fans and critics in his two young boys:

“Kids really are the best critics. I’d created drawings of my grandad for the book. There was one illustration in particular of my grandad winking to the reader at the end. My four year old looked at it and asked me why he had one eye closed. It hadn’t occurred to me that a four year old might not understand the concept of winking. It made me rethink about the audience I was writing for and I had to put myself in their shoes for the rest of the process.”

The book was finally submitted for publication and Rhys will be officially launching it in the summer.

“I’ve had a few copies sent to me and my first job was to give a copy to my nan. Even if I do nothing else with the books, all the time and effort that I put into it was worth it just to see my nan’s face when she saw the book. 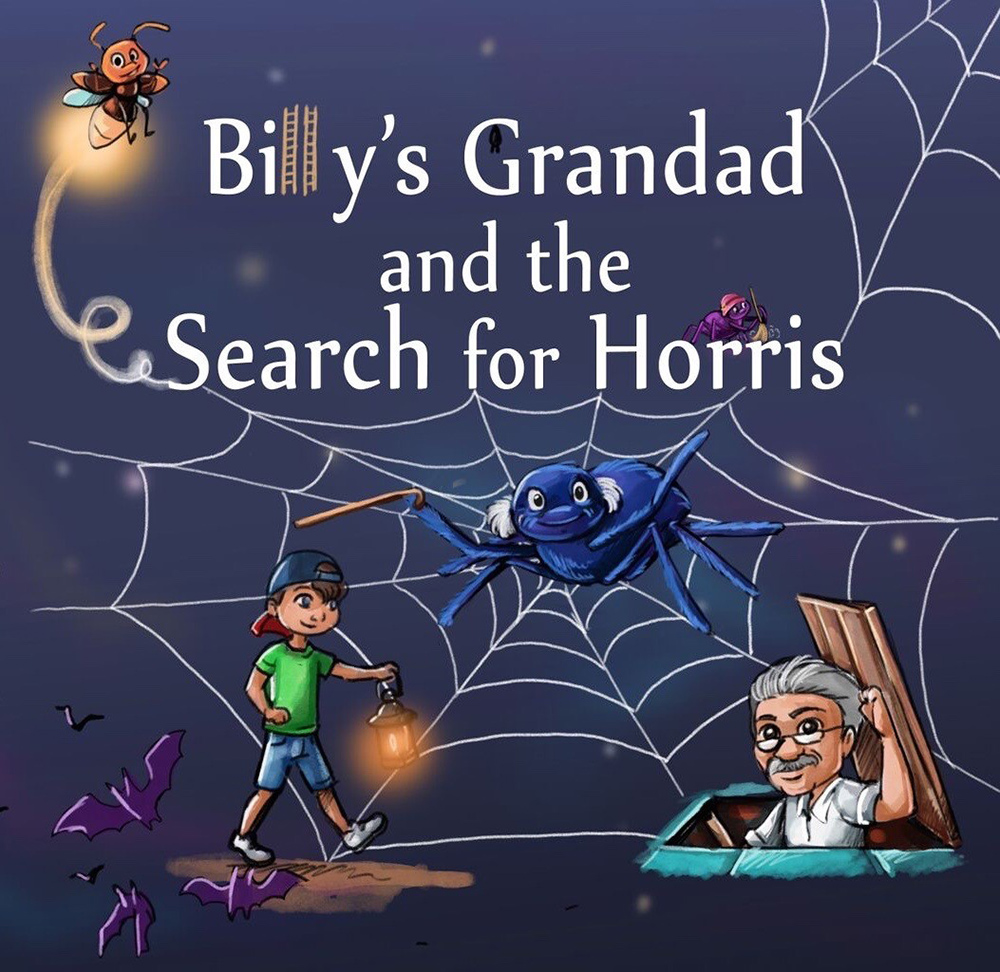 “I’ll be officially publishing on June 30th at the Rhiwbina Festival but the book can be pre-ordered from Rowanvalebooks.com and Amazon. A limited number of copies are also available at the Little People Store in Rhiwbina.

“If someone had told me when I was a kid that I’d end up publishing a children’s book, I wouldn’t have believed them. In school, we always had comprehension drilled into us. The problem for me was that it all focused on things that I had no interest in whatsoever. English lessons always centred around stories that had no relevance to me. Now if they’d given me a match report for a football game and questioned me on that, I’d have been able to answer all the questions, and get them all right.

“I always had a great imagination as a kid so I think that’s helped because I was able to use that when it came to creating my book. I was always a daydreamer in school but of course, the teachers always wanted you to do what they said. You can’t get qualifications in daydreaming though can you?”

Rhys’s pride in his publication is apparent but is also tempered perhaps with a little bit of shyness.

“I’m no English literature student but I’ve managed to publish my own book, which is something that I thought I’d never do.

“I’ve left the possibility of subsequent books open, just in case I do want to produce more. I’ll also continue being a fireman because it’s a job that I have found rewarding.”

Meanwhile, Rhys also continues his other passion of football as manager of Pen-y-Bont FC in Bridgend.

“Being a football manager takes a lot of dedication and devotion. But football is such a big part of me that I can’t imagine my life without it. My book is a totally different part of my professional life but it’s one that I felt I wanted to do.

“Now that I’ve written it, the next step is to market it. There are a few channels I’ll be using but as long as I break even, I’ll be a happy man. I’ve wanted this book to be a lasting tribute to my grandfather and even if nothing comes of it, at least I will have had a go. That’s all my grandad would have asked of me.”

You can buy Rhys’s book at https://amzn.to/2Ih6x7z and from www.rowanvalebooks.com