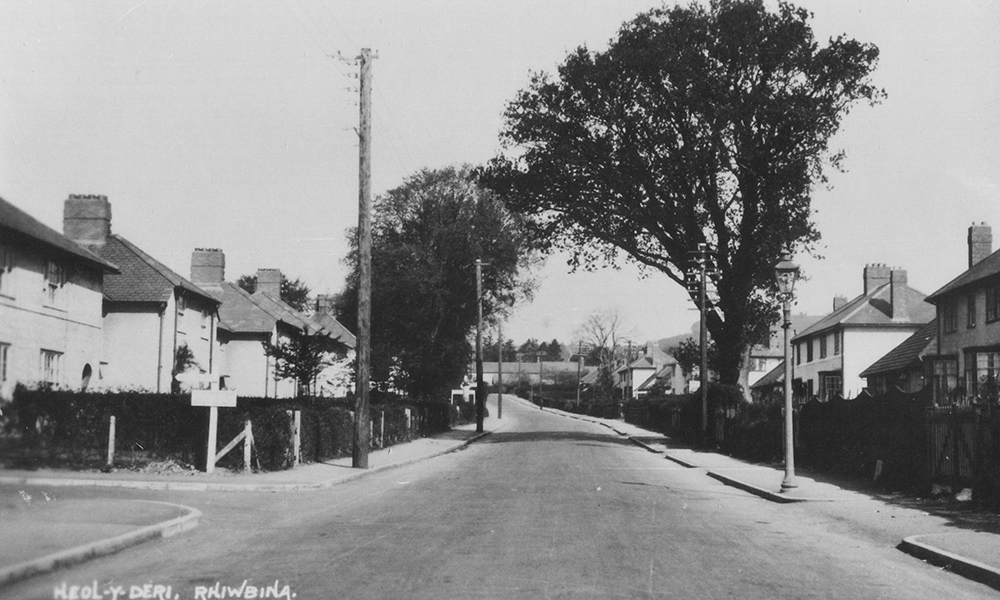 There have been a number of ideas put forward as to how the name Rhiwbina evolved.

In the current Wikipedia entry for Rhiwbina, it is suggested that it is derived from a combination of Rhiw (the slope on which Rhiwbina sits ) with the name of St Beuno but as he was the Abbot of a Monastery on the Llyn Peninsular, with no seeming connection to South Wales, that is highly improbable.

Another suggestion is that it was derived from the Welsh word for pannier referring to the panniers of the mules carrying the iron ingots and rods from the Forge in Caerphilly to the town of Cardiff down over the hill (rhiw) and panna hence Rhiwpanna. This can almost certainly be rejected as historically the name existed before the Forge.

Another suggestion is the name derived from the abundance of pine trees on the slopes above Rhiwbina giving rise to Rhiwpina but again the name existed before these imported trees became naturalised.

In his book Old Whitchurch Edgar Chappell, an eminent local historian and long serving local councillor for Rhiwbina, suggests that the name of Rhiwbina Farm refers to its spread from the Rhiw below Castle Coch to St Ina’s wood, as the wooded left hand side of the Castan valley looking up the hill is still known. Thus the name arose from the combination of these two locations hence ‘Rhiw by Ina’. Having made that suggestion Edgar Chappell says that he was not convinced.

What we do know is that to the north of the town of Cardiff was a large open area known as Mynydd Bychan or The Heath. Part of that Heath was what was to become known as Rhiwbina. However, what did exist was a hamlet of three residences and a scattering cottages near Beulah Chapel, some cottages close to the Deri Mill, and another hamlet on the hill, close to the site of the now Rhiwbina Reservoir, a scattering of farms and a small number of isolated but substantial houses and villas.

The first development of what we now call Rhiwbina was in 1910 when a group of villas was built in what is now Heol y Deri and they now form part of the older shops in the village. The brook we now know as the Rhydwaedlwyd was up to then known as the River Castan and it ran over what is now Heol y Deri as a ford. The name for a ford in Norse is a ‘wallaw which suggests there was a Norse or Danish settlement in this area in the 8th or 9th centuries. There are references to the hamlet near the ford in the Glamorgan records of 1702 as Nant Walla and in 1802 the reports of the Heath Enclosure Commissioners refer to it as Rhyd Wathla.

The Hamlet near to the Rhiwbina Reservoir site was known as Rhiwbrien and consisted of a number of cottages and four larger residences one of which was called Brooklyn.

There is a reference to Rhiwbrien in the 12th century Book of Llandaff. It records that in 1040 Rhiwallon, son of Rhan a member of the bishop’s household appeared before the Consistory Court (an Ecclesiastical Court under control of the Bishop) charged with murdering a member of the Bishop’s household. He was found guilty and for his ‘utter wickedness’, he was excommunicated. After being unable to attend Mass for a year and a day he was allowed to appeal and was restored to communion but only on condition that he gave up all claim to the title of his Rhiwbrien property and that it be transferred to the ownership of the Bishop. A papal Bull of Honorius II, dated 1129, confirmed that the property called Rhiwbrien fell within the Bishop’s land Holdings and was part of what we now know as Rhiwbina and Tongwynlais.

We know that the suburb of Rhiwbina got its name from the Railway Halt which got its name from Rhiwbina Farm which formed part of the Estate of the Morgan family, a junior branch of the Tredegar family, who were known in the 15th century as the Morgan’s of Rhiwbina. The last of the Morgan Dynasty, Elizabeth married Thomas Lewis of New House and on her death in 1787, the Morgan Estate became part of the Lewis Estate subsequently the Wyndham Lewis Estate, the current trust of that name still owning areas of land here in Rhiwbina.

So there would appear to be no clear answer as to the source of the name Rhiwbina. It probably evolved from Rhiwbrien but could be from Rhiw to St Ina’ Wood. But we are called what we are called because the Marquis of Bute was persuaded not to call our Railway Halt Nant y Walla Halt and we can be grateful that when we are on the telephone explaining where we live that it is even less difficult than it might otherwise have been.

Your pet questions answered
To Top