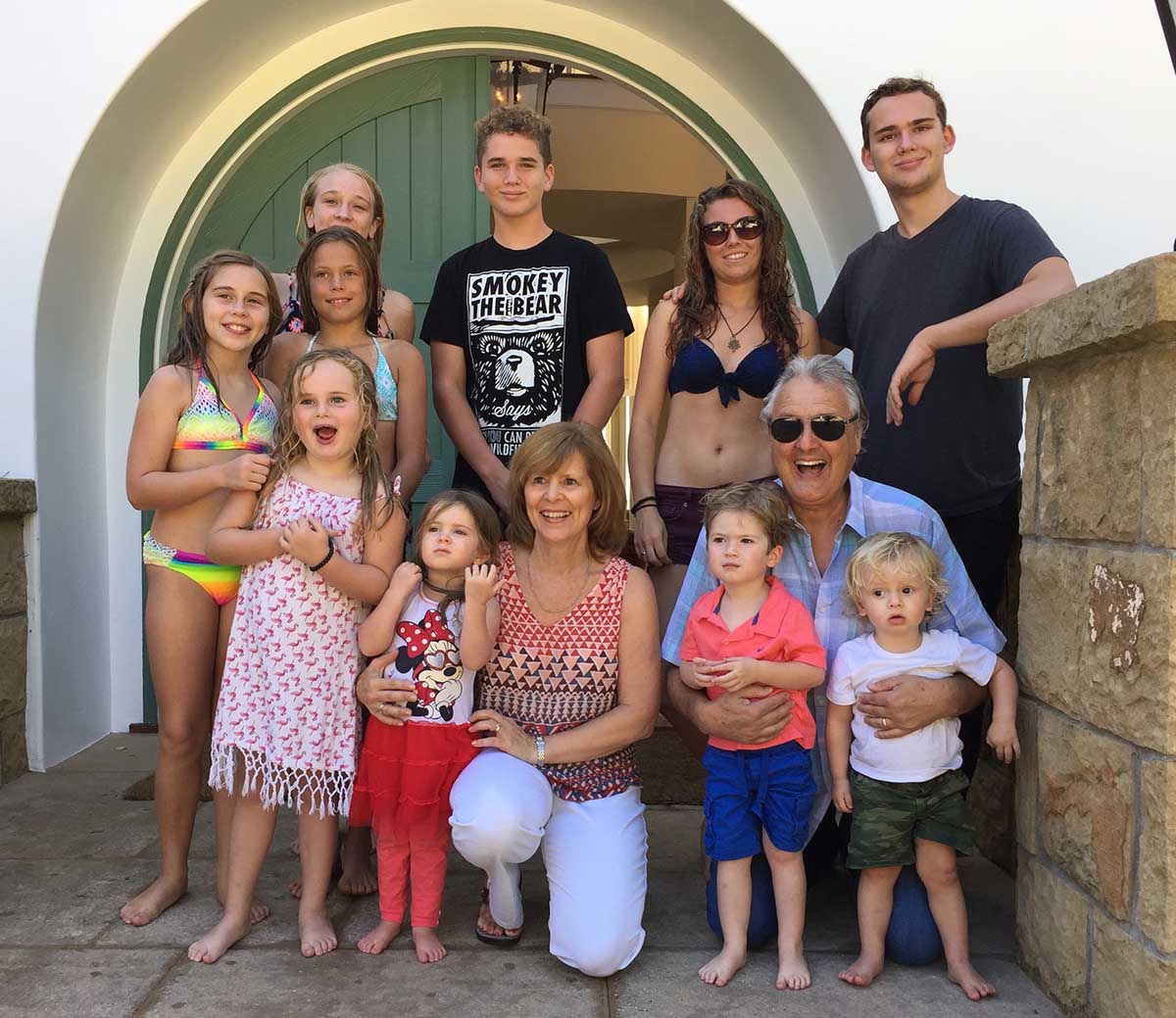 His shows have been watched by millions of children across the world. The characters he’s invented have played a huge role in the childhoods of many. Yet Mike Young is very much down to earth, rooted in good Welsh earth, and very proud of his local links.

“I live in a place named Calabasas, which is at the far western end of LA. Whenever this is mentioned in the UK, people invariably respond with the phrase ‘that’s where the Kardashians live….do you know them?’

“In a similar vein, when I mention Whitchurch in my extended US soccer world, they always say ‘Isn’t that where Gareth Bale comes from? Do you know him?’ I always answer with ‘Yes he’s a great mate of mine.’ (I wish)”

Home for the Emmy and BAFTA Award-winning animation producer may now be The City of Angels, but Mike’s Welsh upbringing gave him the belief that anything is possible.
“I am a Barry boy and my wife Liz is from Old Wallace Farm in Dyffryn so we know just about everyone there! I was born in Cwm, Ebbw Vale, in the same flat that my cousin Victor Spinetti was born in a decade or so earlier. My first memory was watching the miners walking up Marine Street with flaming torches singing ‘Vote, vote, vote for Aneurin Bevan, Kick old Churchill up the… ‘(I had better finish there). We moved from Cwm to Barry when I was about six years old. To me, it was a bit like moving to Las Vegas – or so it seemed to me at the time. Victor was a huge influence on me and through him, I could see that anything was possible in life. Not only did he once take me as a late teenager for a night out with the Beatles, but he also cast the voices of Jon Pertwee, Melvyn Hayes, Derek Griffiths and Roy Kinnear in Superted for me. 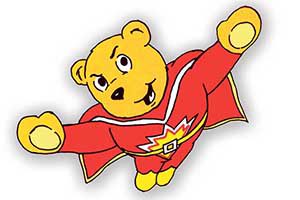 “My start in life in the valleys formed my political views that remain to this day and in US terms are well, well left of centre, leading to some feisty dinner conversations!”

Before his life in the US, Mike trained as a TV producer in Wales, and was working as an advertising copywriter.

“I had remarried and had inherited two children to add to my own two, the youngest of whom was three years old. Richard was a bit insecure and afraid of the dark, (this is an often told story!) so I started telling him stories about a Teddy Bear who was also afraid of the dark – but when he whispered his secret magic word that only he (and now only Gareth Bale) knew, he turned into SuperTed. One day, when collecting Richard from play school, the teacher told me that he always retold them the story I had told him the previous evening. The teacher told me that the kids loved the stories and asked why I hadn’t published them. The rest is history.”

In 1981, S4C enquired about making SuperTed into an animated series, but Mike decided to create Siriol Productions to produce the series himself.

But in 1989, Mike was finding it difficult to sell his series to Hollywood executives without a local presence there so he sold the majority of his stakes in SuperTed and moved to LA.

“Next to North Korea, the US is in its own way, the most insular country on Earth. The thought, back in the eighties of a network there commissioning a show from a studio in Wales was just not feasible. SuperTed had been sold as an acquisition to Disney, the first time that the esteemed organisation had ever bought an animation from an outside studio; but in order to get a new series made, we needed to work through an American studio. Hanna Barbara came on board and with them, we co-produced a US version of SuperTed followed by Fantastic Max, Sleepy Kids and the motion picture Once Upon A Forest. I still have great friends from those days but creatively speaking, it was frankly like working in a factory. We decided to up sticks, move to LA and start our own studio. So off we went with our five kids, though two of them were still in college in the UK.

“When I look back, I think I must have been crazy for doing it – the chance we took was enormous. We set ourselves up against companies such as Disney, Warner Bros, Viacom and a plethora of huge independent animation studios. We moved into the home that we still live in. The kids now won’t let us think about moving, so twenty six years is the longest we have lived anywhere. We won a commission from ABC television for The Secret Garden, followed by The Life and Adventures of Santa Claus, and through the years, have produced a who’s-who of animated shows including Care Bears, Strawberry Shortcake, Clifford the Big Red Dog and the Clifford feature film for Warner Bros. Others include Zhu Zhu Pets, He-Man: Masters of the Universe, and Voltron. In Wales, we came back and produced Chloe’s Closet as well as Dive Olly Dive, both worldwide successes. There was also Sabrina the Teenage Witch and Hero 108.”

“We are currently producing Mariah Carey’s: All I Want For Christmas Is You for Universal Studios, as well as The Real Tooth Fairies, and Lalaloopsy (ask your kids!). We also own Kabillion, which is a multi-portal network which runs in over seventy-five million US homes on cable, Roku, Apple TV, Amazon Prime and others. Kids can freely watch shows whenever they choose.”

Mike’s latest production is the animated feature film, Norm Of the North. The main character, Norm the polar bear, heads to New York to fight a tourism development of his homeland in the Arctic. Although the film didn’t have a big budget, the film used the latest computer generated imagery (CGI) technology.

Advocating for the independents, Mike told the press:

“It’s all well and good having Disney, Pixar, Universal and DreamWorks but fundamentally they go a certain route, but we can take more risks with what we do.”

The film got its Welsh première at the Market Hall cinema in Brynmawr, late last year. Despite all his successes in the world of animation, Mike’s greatest achievements lie closer to his home.

“Having a happy loving family in this day and age is my biggest success. I have kids who can build on the advantages that they have been given. My eleven grandchildren (ten of them, not counting the two month old!) have been back to Wales and love it there. They all identify with Wales and in anticipation of the next question, yes – they have been completely brainwashed about Cardiff City! In terms of success with my work, the fact that my original creation SuperTed is so iconic, and so identified with Wales, I believe that anything else I’ve achieved pales beside that one.” 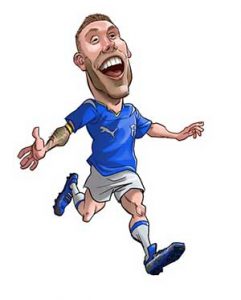 Mike’s devotion to Cardiff City started when he was a youngster.

“Since watching Trevor Ford playing for Cardiff against John Charles, who was then playing for Leeds United, I have been completely hooked on Cardiff City. I sponsor bits and pieces from time to time (you can see the latest caricatures around this page). They join the twelve others that adorn the Family Area at Cardiff City Stadium. I get to see less than a half a dozen games a season but I listen to them on the net and in our brief season in the Premiership, I was able to watch all the games.

“I optioned the book ‘The Greatest Footballer You Never Saw’ and I am in the final stages of financially packaging it for production in the autumn. The live–action movie will star Sam Claflin as Robin Friday, Louis Tomlinson as Steve Death (both good footballers) and the rest of the casting is coming together.”