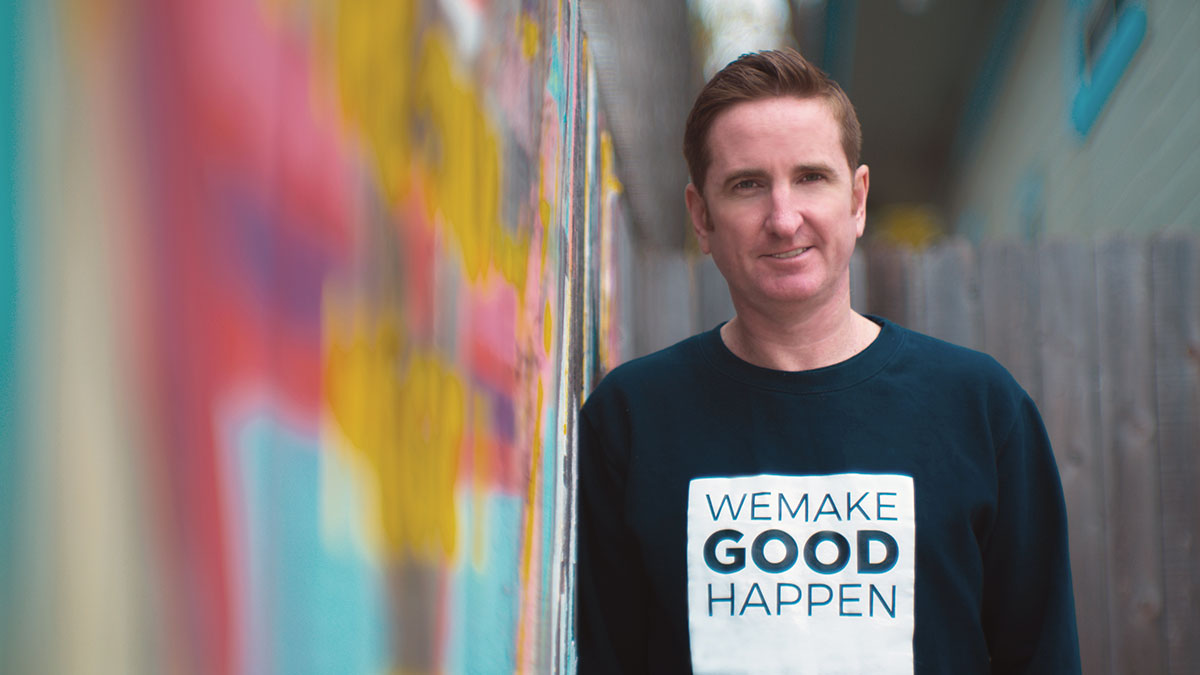 In a world that seems unsettled, unpredictable and troubled, Matt Callanan is looking to spread one of life’s greatest gifts – kindness

He’s travelled the world. He’s interviewed legends. And he’s even been the feature of his own TV documentary.

Yet there’s one thing that Cardiff’s adopted Bristolian keeps coming back to – kindness.

“I had a great and happy childhood. I was brought up in Bristol and we were often being driven over the old Severn Bridge into Wales for day trips and holidays.

Matt’s experiences in youth were to shape his take on the world as he stepped into adulthood.

In fact, Matt spent his 20s as a music producer and DJ, travelling the world with his best friend.

“After that, I used my video skills to work for the BBC in London, and then I started my own business when I moved back to Cardiff – it’s now been going for 10 years.”

Matt’s love for creativity was to put him on course for some life-changing moments.

“I really liked writing when I was younger. I always wanted to be a journalist, plus I worked out that I could get free stuff if I reviewed it. I started reviewing music and films for a national youth newspaper so that I could blag my way into movies for free. You’d often see my postman carrying piles of vinyl, tapes and CDs for me.

“It was while I was writing for this newspaper, aged 15, that one of the editors got in touch and said that they really enjoyed my writing and asked if I had ever thought about interviewing people. I hadn’t, but it spurred me into a new pathway of asking questions to famous people.”

Matt’s natural curiosity for human nature allowed him to draw the best out of the famous names he subsequently interviewed.

“Interviewing people helped me get over my shyness, which resulted in me becoming Interviews Editor at Gair Rhydd – Cardiff University’s student newspaper. I loved that role; I learnt lots, blagged loads of gigs and music, and interviewed my heroes like Moby, Orbital and DJ Shadow (when he played at the Welsh Club!); plus I met my DJ partner of 10 years.

“It was while I was at Cardiff Uni that we started DJing for the Student’s Union and playing at Clwb Ifor Bach. This became the springboard to our DJ career. We travelled the world for ten years, making music that topped the dance charts. It’s hard to beat a job where you’re being paid to travel, party, play all your favourite records with your best mate – and make people dance. It’s all about connecting the dots.”

More recently, Matt made the headlines for his project that’s still having a positive impact on the world to this day.

“My kindness project came about by accident. Over six years ago, I had burnt myself out. I was just about to become a Dad so I was saying yes to lots of jobs, travelling the world and doing too many flights back to back. There were lots of early mornings and late nights. I thought that I was superhuman. But that wasn’t the case.

“During my recovery, I delved into what my purpose really is. I slowed down. I didn’t say yes to every single job that I was offered. I thought lots about what it takes to be a good Dad. My own Dad was amazing in the community, often helping others. He would do stuff for the homeless, take food to the food banks and he’d be packaging off clothes to go to India. I grew up seeing my hero helping others. That was inspiring. I realised that I needed to be more like my Dad.

“Sadly, he passed away from cancer at the age of 58. So I started being more proactive about helping others and donating films to charities and causes that couldn’t afford them.”

Matt’s We Make Good Happen movement had started out as a father-and-son project, achieving 403 good deeds to positively impact 12,000 people.

“There’s a Bill Murray connection to the number!” laughs Matt. “I was interviewing actor George Clooney for a US documentary in his house when the theme of kindness came into focus. George had been talking about how he helps others and I decided at that moment to properly focus on kindness, and carry on the legacy of my Dad. My Dad had got me into film-making and here I was, sat opposite a Hollywood legend.

“While we were packing up the camera kit, in walked Bill Murray and introduced himself to me. Bill is my absolute hero, so I thought that this day couldn’t get any better.

“On the way back to Cardiff, while buying some snacks in a shop, I decided to buy a lottery scratch card for the first time. The first two numbers were £250,000. All I had to do was find another one to win that amount. I really thought that I was on a winning streak. I furiously scratched off the remaining numbers and saw that I’d won! But only £20.

“The drive back to Cardiff got me thinking that all of this had perhaps happened for a reason. A few weeks later, I took a Big Issue vendor into a supermarket, gave him a basket, told him to fill it up and that it was on me. Afterwards, he gave me a massive hug, a big kiss on the cheek; he tapped his heart and said ‘My brother, my brother.’ In that moment, I felt warm, like we’d connected and I wanted to do more of it. That was the start of We Make Good Happen. This principle of using small amounts of money to do good and create a positive impact on a person led me to start #Tenner4Good.”

#Tenner4Good saw Matt hide a number of £10 notes in envelopes in and around Cardiff. Inside each envelopes were 2 rules:

The idea went viral online. Matt was featured live on BBC Breakfast News and was on the BBC website’s front page for three days. Matt’s subsequent BBC Three documentary on the subject had over 3 million views; it was reported in many of the tabloids.

“The George and Bill day was the start of everything. It gave my life a purpose. But I had to get over my massive fear of speaking in public – after a limiting belief that had held me back since my youth.”

In secondary school, Matt’s teacher stood him up and berated him in front of the whole class for spelling a word incorrectly.

“All the pupils started laughing and I went through embarrassment and shame to the point where I was in tears. I never wanted to stand up in front of others again. That teacher stole my voice for many years. I’ve only recently been tested and found out I’ve got mild dyslexia.”

Since then, Matt has used his voice to tell his story and to inspire others into positive action.

“Getting over that fear, to now speaking internationally and doing gigs like TEDx also allows me to help others to use their voices to make a powerful impact.”

Matt has since combined his love of tech and his inspirational message to reach people – through the medium of podcasting. Podcasting is a free service that allows internet users to listen to ‘shows’ on their computers or personal digital audio players, much like radio.

“Podcasting is amazing. There’s so much potential right now – just because there’s so few people doing it. There are only around 1 million podcasts right now and only about half of those are active. There’s plenty of opportunity for your voice to make an impact and your brand to be seen and heard.

“It’s so rewarding when listeners get in touch about my podcast We Make Success Happen and let me know how it’s inspired them. I’ve had people on there such as Charlotte Church talking about her Awen school project, the late and great Dilys Price OBE revealing all her incredible wisdom, through to Kerrie Aldrige who was London Marathon’s last finisher.”

Matt has recently launched a course to educate people so that they can create their own podcasts.

“People that have been on my Podcast Like A Pro course have said it’s life changing. I can’t guarantee that, but I get people to think a lot deeper about why they’re starting a podcast, how it ties in with their mission or purpose and how they can use it as a vehicle to achieve their Big Boldacious Goal.

“One podcast episode I did resulted in a whole chain of events that saw in a guy in Africa being able to buy a piece of land and build a house on it for his family. That’s an incredible domino effect!”

2020 has taught Matt some lessons in life too:

“We all have inner skills that we can use to be inventive, be more compassionate and be community driven.”

You can find out more about Matt and his podcasting course at mattcallanan.co.uk

Read our latest issue of Whitchurch and Llandaff Living here