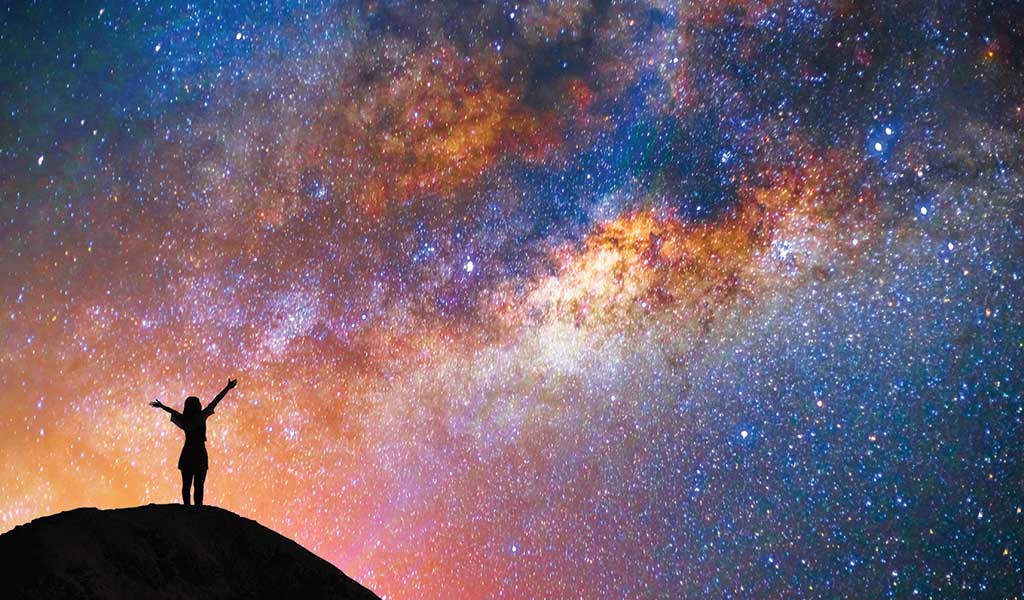 Do you ever look up at the night sky and wonder what you’re looking at? Taking up astronomy is one outdoor activity that can be a fascinating and educational pastime

Astronomy is the branch of science that deals with celestial objects, space, and the physical universe as a whole.

We tend to use the term to describe the study of the planets and stars through the use of telescopes.

Early astronomers noticed the patterns in the night sky and attempted to classify and organise them so that they could predict their movements. These patterns, known as constellations became useful because people could measure seasons, which helped grow food.

The movement of the stars and other heavenly bodies was tracked around the world, but was prevalent in China, Egypt, Greece, Mesopotamia, Central America and India.

Where do I start?

One look at the equipment and information that’s on offer can be overwhelming at first. It’s therefore best to start small.

Your first step will be to head outside at night and get familiar with the names of some of the constellations and the brightest stars. If you live in a densely-populated area, you may want to head out to the countryside where there is less light pollution.

It’s also worth investing in sky maps and guide books to help you. In astronomy, you’ll always be learning but guidebooks can show you the basics and where to start.

You can learn a lot from other astronomers, especially in dedicated clubs. Stargazing clubs often hold star parties, where you can find out more about telescopes, what to look for, and other skills and tips.

When it’s time to get a telescope

Before long, you’ll want to get your first telescope. It’s always worth doing your research before you commit to buying one because they do vary. Don’t skimp on cost – your telescope should have high-quality optics and a sturdy, smoothly working mount.

You’ll also need to think about practicalities like portability. Whatever one you choose, make sure it’s one that you’ll want to use over and over again.

What to look out for

First things first – be careful! Looking at the moon through a telescope can be very uncomfortable, especially when it’s a full moon. The brightness can cause eye damage so look to get yourself a moon filter, which you can place over the eyepiece of the telescope.

Getting hold of a lunar map will help you work out what’s what. The moon’s craters and mountains will be perfectly visible, even using binoculars.

Working your way around the sky can be daunting at first so a good place to start is with The Plough. It’s a group of seven bright stars that are always visible in the Northern Hemisphere. It also has two stars called the Pointers that point to Polaris, the North Star. Polaris is positioned almost exactly above the Earth’s axis at the North Pole, so unlike the rest of the sky, it doesn’t move and shows which way is north.

It’s not just stars you’ll be looking at. You can also view planets through a telescope or even a pair of binoculars. Each planet can be seen with differing clarity. Venus can often be picked out due to its brightness, and is therefore best viewed during the evenings or early mornings.

Mars has a distinctive red hue about it but giant sandstorms often cover the detail that one would expect to see. Jupiter, on the other hand, is well worth a look. Its atmospheric bands, which fluctuate constantly, can be clearly viewed, as too can its Great Red Spot.

You can see Saturn itself through a pair of binoculars but if you’d like to see its ring system, you’re better off with a telescope.

Further out, Uranus and Neptune look like small greenish discs through a small telescope and you’ll need a powerful telescope to see Pluto.

Comets are cosmic snowballs of frozen gases, rock and dust that orbit the Sun. When frozen, they are the size of a small town. When a comet’s orbit brings it close to the Sun, it heats up and spews dust and gases into a giant glowing head larger than most planets.

Comets are visible through telescopes and a good pair of binoculars. Often marked by a distinct greenish-blue haze, they are not to be missed. Unlike shooting stars, which can’t be caught with a telescope, comets don’t zip across the night sky at speed. Search the internet to find out where you can find the latest comets.

Escape the city lights to see our galaxy in all its glory. You’ll be better off heading right out into the country to view the Milky Way, which rises after sunset and will span the sky by midnight.

It is best viewed during the summer months when almost 2,000 stars are visible to the naked eye on a clear night. The Milky Way actually contains about 100 billion stars in total and every star you can see with the unaided eye is located within the Milky Way.

Stars and planets aren’t the only things that fill the galaxy. There are also many nebulae – giant clouds of dust and gas. These are the places where stars are born. Deep space is also filled with other galaxies, varying in sizes and shapes. Some are spiral-shaped, some are spherical and others don’t have any particular shape at all.

What you’ll be able to see will depend on the quality of your telescope and the darkness of your environment.

Mystery of the Phantom Rhiwbina Firework Prankster deepens
To Top