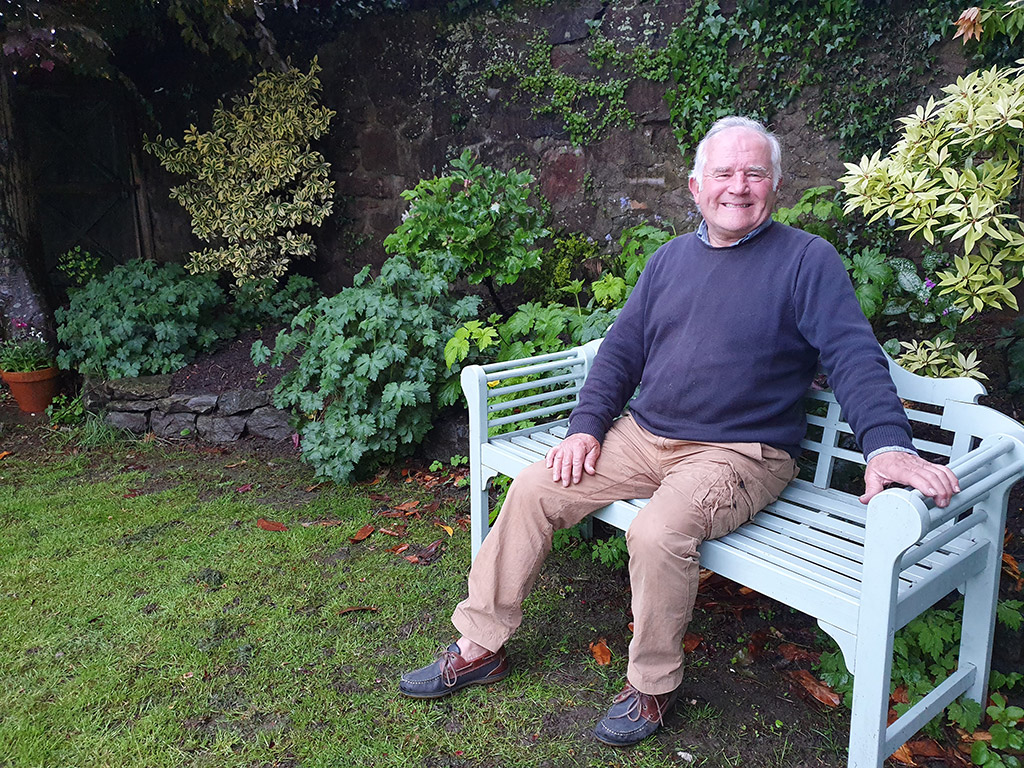 Geoffrey Barton-Greenwood is a familiar face around Llandaff. He is also important to the village’s continued progression and prosperity

The retired chartered surveyor and current Chair of the Llandaff Society has Llandaff running through his veins.

“I was born in 1943, at which point, my mother had rooms at Insole Gardens. I came home from Nurse Howells Nursing Home in Whitchurch to that address and I lived there until there was a later fear of Nazi raids in Cardiff. My father was away with the 8th Army at the time.

“My gran came around to the house one day and said to my mother ‘Joan. You’re not living here anymore. You’ve got to take that boy to the countryside where it’s safe’. So she took me to Rhiwbina, to live near the Monico cinema.”

As one of the largest coal ports in the world at that time, Cardiff continued to be the target for the Luftwaffe who continued their bombing raids. For Geoff’s family, the nearby Royal Ordnance Factory was a bit too close for comfort.

“We were there for two years but then we moved out to Twyn-yr-Odyn, near Wenvoe, where my father was born. My grandfather owned a quarry there. My brother came eight years later when we’d moved to the Heath.”

Geoff’s formative years were to have a great impact on his later life.

“I remember my grandfather driving me from Rhiwbina through Gabalfa, which was just a set of traffic lights at that point. I was very small and as we dropped down onto Western Avenue, I remember looking over and seeing the steeple of Llandaff Cathedral lopped off.”

The cathedral had been hit by a parachute mine in January 1941. Its steeple was not replaced until the 1950s.

“My great Aunt lived in Llandaff’s Ely Road. She had an air raid shelter at that time and I distinctly remember going into it. Strangely enough, I had the chance to go into the same air raid shelter only about six years ago. It’s still there!”

The sight of aircraft flying low over Cardiff was commonplace at that time, even into the 1950s.

“I was standing in the playground of my school one day and two American planes came flying over at about 1,000ft. The first plane was a Martin Mariner Flying Boat and the second was a Convair B-36 Peacemaker, which was a huge plane. Its nickname was ‘Big Stick’ and it had eight engines in total – six pusher propellers on the back of its wings and two jets that sat in pods underneath the wing tips. As you can imagine, they made an incredible and unique noise.”

It was moments like these that helped start Geoff’s direction in life.

“I was intent on becoming an RAF officer when I was at school. I was especially interested in aviation and had been since I was a child.”

Geoff eventually moved away to live in Central London at the age of 18, joining the Ministry of Aviation.

“I was an Executive Officer dealing with aviation policy matters.”

But it wasn’t long before Geoff found his true lifelong vocation.

“I then left to train as a chartered surveyor and valuer. I’d always loved Geography in school; I was very interested in maps and in geology. I became a Valuer for the Inland Revenue, working in Cardiff, Pontypridd and London.”

Geoff met his wife-to-be Jennifer at the Young Conservatives in London. They were married at Christchurch, Brondesbury Park, North West London.

“We had our first home in Lon Ysgybor in Rhiwbina where we had our two children. It was lovely there, on the side of the Wenallt. We’d let the kids out to play on their own and trusted them to stay safe. We then moved to Radyr where we were supposed to be for three years but were there for 18!”

From 1980 to 1991, whilst having a second career as a Commissioned Officer in the RAF Volunteer Reserve, Geoff was Flight Lieutenant in command at 2213 (City 0f Llandaff) Squadron Air Training Corps, based at the TA Centre in Llandaff North. During this period, many young people passed through the Squadron, reaching a maximum strength of +45 cadets.

“Through our training programme, doors opened to free flying, gliding, overseas travel, sport and adventure training for young people aged 13 to 22 years, many of whom have achieved great things,” says Geoff.

But it was the family’s move to Llandaff in 2001 that was to become a blessing for the village.

“It was our son who asked us to look around Llandaff for a place for him to live. We came to look at the house that we’re in now. The first thing we saw were a load of trees as the house was almost out of sight behind them. But the moment we walked through the door, we knew that we had to have it.

“The clincher for me was when I stepped out into the back garden and saw a concrete air raid bunker. It measured 12ft x 8ft and had been there since World War II. The previous owner was an architect so when Llandaff was bombed, naturally, he got straight to it and built it. He then buried it under a mound of earth. It’s still here today.”

Both Geoff and Jenny slotted into Llandaff life:

“In a sense, it seemed like home as I’d never lost contact with the village. My great aunt lived on the Green and we were all here for the Queen’s Silver Jubilee in 1977.

In fact, we still have photos and even film footage of that day.”

1977 was the year that the Llandaff Society also came into being. Unbeknown to Geoff, he would come to play an important role within the Society.

“The Llandaff Society existed when we moved here but we didn’t know anything about it. We came to establish contact with them and were invited quite quickly to join the committee. It was in decline at that time with Lisbeth David, who was the champion of pedestrian and all good causes.

“I went along for a couple of committee meetings and then they had an AGM and I got myself elected as vice-chair and before long, I found myself having to take over as chair and haven’t looked back since. Jennifer is the Society’s Honorary Secretary.”

Today, the Society exists in part to stimulate public interest and civic pride.

“We look after the civic aspect of Llandaff and safeguard its history. We try to create social interaction by building bridges with all elements of the community.”

The Society also promotes the provision of public and community facilities. As well as raising money for the annual Christmas lights, it also publishes Occasional Papers, reflecting the history of the area.

“We’re privileged to live in a place that has such enormous history. I feel that we, as a village, need to project ourselves and our history so that we aren’t consumed by the Great Wen of Cardiff. After all, we were literally on the map way back in the 16th century. Llandaff is clearly marked on one of the maps that I’ve seen from the time of Henry VIII whereas Cardiff wasn’t. The history of Llandaff stretches back to Roman times.”

In fact, Llandaff was named as one of the best urban places to live in the UK by the Sunday Times Best Places to Live Guide in 2015.

“The quality of life is fantastic here. We’ve got a very busy High Street as our core, and we’ve got a great variety of places to eat and drink.”

Despite that, the village still has its challenges ahead.

“Llandaff’s biggest threat is the possibility of it being submerged by traffic as a consequence of up to 11,000 houses being built nearby. The Society has spent 3 months at the Inspector’s LDP Inquiry, pressing for adequate infrastructure.”

Despite their worries, both Geoff and Jennifer are grateful for their surroundings and their community.

“We’re so lucky to have such lovely areas around us in a city location.

The Society has stimulated new life in the village and encouraged people like Brains to invest in the pubs to lift them out of ‘spit and sawdust’ to what they are today. We’ve persuaded the Council to invest a lot of money in the High Street, we’ve got rid of the overhead telephone wires, had the Victorian street lights put back and introduced new benches and flowers.

“And I keep getting re-elected as Chair,” he says.

It’s not hard to see why.