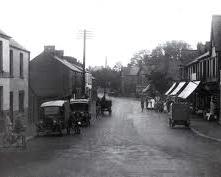 I write regarding the article by Les Gibbon entitled ‘More Memories of Melingriffith’, as published in a previous edition of Whitchurch and Llandaff Living.

It evoked many, if now patchy memories for me, of the times I would spend with my grandparents at a very early age in the late 1920’s at their cottage. It has long been demolished but it stood on Ty-Mawr Road, Llandaff North, and was one of three or four cottages virtually opposite the Williams’ house abutting the canal as shown in your photograph.

Les’s article brought back memories of Sunday mornings when the Melingriffith Band practised in a barn known as the ‘Piggery’ on land near Band’s Bridge on Ty-Mawr Road.

The early morning sound of the tin-workers trampling past the cottage to their work at the Melingriffith Works, often with a white scarf round their neck to absorb the sweat from the heat at their workplace; memories also of the barges on the canal towed by a horse who would be unhitched at a bridge such as Band’s Bridge, for the barge to pass under while the horse waited on the other side to be re-hitched.

I have memories of the elderly couple called the Isbergs (if my memory serves me right), who lived the other side of the locks. He was presumably the lock-keeper, and it was in their house that I first heard (at the age of four or five) the miracle of radio. By that I mean, a scratchy noise emitted from a crystal set as it was known in those days.

The old water wheel on the feeder at the back of their house has probably long gone – sadly Mrs Isberg fell into the lock one dark night and was drowned. Many must have drowned in the canal over the years, including a very young cousin of mine, who at the age of 13 or 14, fell into the canal lock near the Cow and Snuffers pub. I also have memories of walking down the canal path towards the ‘Ton’ (Tongwynlais), past the ‘Sunny Bank’ cottages on the other side, at the beginning of the ‘Long Wood’. Forest Farm was on the left, and was managed at that time, I believe, by a Jeff Troakes. The sudden sight of a kingfisher darting across the canal from the Long Wood often made me gasp. I believe that the kingfisher family are still there after some 80 years!

Yes – fond memories of innocence and pleasure in the early thirties, unaware of what was to come: training in Canada as a bomb aimer and navigator for the RAF, and thankfully, for my conscience, not having occasion to drop a bomb before the war ended.

I have never written this before, and I apologise if you find this a complete and utter bore. I blame Mr Gibbon for the evoking of memories!