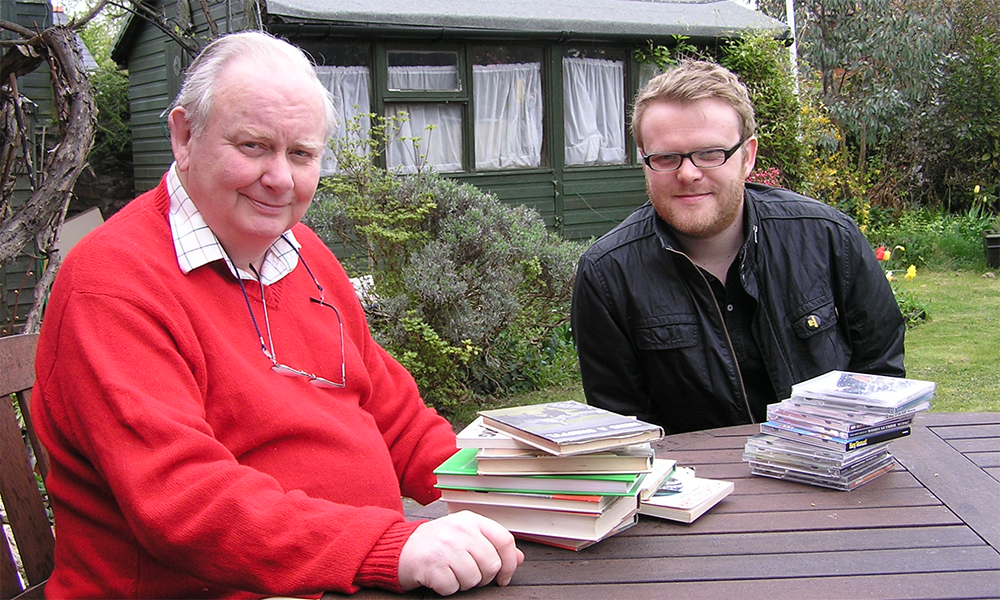 Writer, journalist, magazine editor, anthology compiler, poet, arts administrator, teacher, director, critic, entrepreneur, literary ambassador, obituarist, and professor. These are just some of the positions that Welsh writer Meic Stephens has held in his esteemed career. And the success doesn’t stop there. His son Huw, the well-known Radio One and Radio Cymru DJ, carries on the Stephens tradition of promoting the arts in his own way.

“We’ve never really sat down and compared careers,” says Meic, analysing the shortbread biscuit that he holds in front of his face “but thinking about it, there are similarities.”

The two men appear too bashful to speak of their own success and instead take it in turns to speak proudly of each other.

“Huw got his first paid job before the age of 10,” announces Meic “but I’m not sure if Huw wants me to say what it was.”

“I was a young conjurer performing in Cardiff,” continues Huw, sipping his cup of tea. “I was the only one in the area who could perform magic in Welsh so I was in great demand.” Huw’s high work ethic was one that catapulted him to stardom at a young age. Still in his teens, Huw got a job working for Rookwood Sound – the radio station of Cardiff’s Rookwood Hospital.

“I didn’t get paid but I was doing what I loved. I was told not to play anything gloomy or depressing- they wanted their patients to be uplifted and kept happy.” Huw crafted his art for two years at Rookwood, before managing to land the position of Radio One DJ – at the age of just 17.

“It was the time in the nineties when Welsh talent was in big demand. The Stereophonics, the Manic Street Preachers and Catatonia were really leading the way for Wales. Bethan [co-presenter] and I beat off the competition and there I was – a Radio One DJ before I’d even left school. I even opened my A level results live on-air. Ironically enough, my grades were B, B and C!

Meic put on poetry readings for local poets in his younger days. By 1967, he had become Literature Director of the Arts Council and was running Poetry Wales – a magazine he edited for eight years. The high regard in which Meic is held within literary circles has come about through a devotion to his art.

“Dad has worked hard all his life at what he does best, and for both of us, you could say that our work is a paid hobby,” says Huw.

Today, Meic’s own book collection spills over into many rooms. His library is stacked wall to wall with books – all of them in alphabetical order.

“It’s all the result of a tidy mind – placing each book in its rightful place gives me a sense of completion. I can honestly say that I’ve read each and every one of these books too – reading is so important.” Suddenly, Meic’s beaming face takes a more solemn tone.

“Language is power – illiteracy creates oppression. The fact that there is so much illiteracy nowadays concerns me. Reading gives people the language to think.”

“Whereas Dad likes the idea of having something solid and tangible on his shelf, my collection is mostly unseen. A lot of my music collection is stored digitally- maybe a sign of the same passions but in a different generation,” says Huw.

The parallels between father and son don’t stop there.

“I now do the same with badges,” says Huw. I collect things like tickets stubs and wristbands- nothing that has monetary value but means a lot to me. Dad collects literary postcards these days- whenever I go away he asks me to pick some up.”

It seems that success is something that runs in the Stephens family. Meic continues to write. His latest novel, Yeah Dai Dando is based in Cardiff.

“We have lived here in Cardiff now since 1987. We have moved several times before settling in the house we are in now. Our ten grandchildren love the garden- they treat it like their own personal park.” says Meic chuckling.
Huw’s musical commitments mean that he away from the family home a lot.

“I do get back to Cardiff often, despite having to travel a lot with my job. Most of my time is spent programming my radio shows and listening to new music but it’s nice to keep such a close bond with the family.”

“We have artists performing in both Welsh and English – a bit like Dad’s poetry readings back in the ‘60s I guess,” says Huw. “On reflection, we’ve both been doing the same thing with our lives- just in a different generation and through a different medium.”