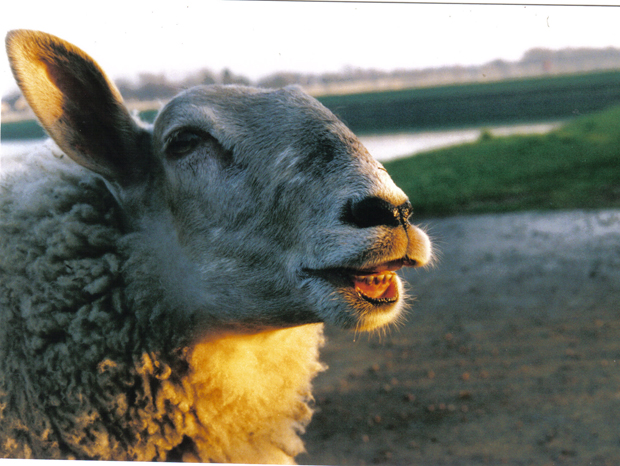 Nicky is like most other youngsters in Rhiwbina. He lolls around on the floor, eats all the biscuits from the tin and gets sent out of the room when he’s naughty.

But Nick is slightly different from most youngsters in that he’s covered in wool and bleats. He also weighs in at 22 stone.

Nick Boing Boing to give him his full title, has become something of a celebrity around Rhiwbina, and is often seen wandering the local streets and parks on one of his many walks.

“My partner and I had been to Goldcliff Nature Reserve in Newport, Easter Monday three years ago when we heard bleating from some long grass. When we took a closer look, we realised that it was a newborn lamb. He still had his umbilical cord attached. His mother had obviously bolted for some reason and left him. We took him to the nearest farm but the farmer was out so we left our name and number and he came home with us.” says Dave.

“I took some advice from a local farmer about feeding and so on. We soon realised that as nice as it was having a baby lamb around, we’d soon have a full-grown sheep on our hands. We took him to the local farm but he never liked it there. He kept himself to himself – he wasn’t really wanting to get to know the pigs and goats there.”

“In truth, we were missing him desperately, so we went back to the farm. As soon as I opened the boot of my car, he was in like a shot.”

Since then, Nick has been living the life of luxury in Rhiwbina – he even has his own purpose-built bungalow with windows and fitted carpet.

“He loves coming into the house to be honest,” admits Dave. “He’ll come in here for the evening, making himself comfy on the sofa and watch a bit of telly. He tends to head-butt the cushions off the settee and if there’s anything edible around, he’ll have it. I was getting ready for a walk one day when I realised that I had left a £20 note on the table in the living room. Sure enough, when I dashed back, he was chomping on it.”

Nick and Dave do get some funny looks from passers-by but most of the neighbours now accept Nicky as part of the North Cardiff community.

“There was this one woman though who came up to me a few months ago and told me that I’d been lying to the press. I’m not sure what she was going on about. But most of my neighbours round here love Nicky,” says Dave.

UPDATE: Sadly, Nick passed away in early 2013 after an illness. A tree has been planted in Parc-y-Pentre in his memory.