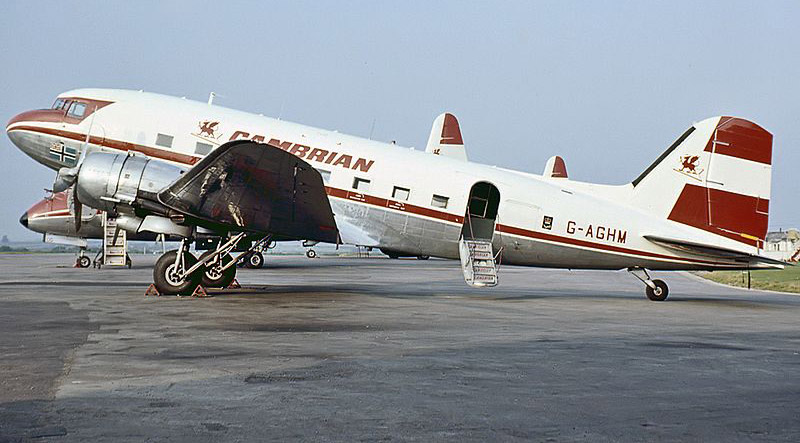 Work, play and tragedy: Rhiwbina’s Gloria Gee recalls her days as an air hostess for Cambrian Airways in 1955.

I had finished my training to become a State Registered Nurse at the Middlesex Hospital in London and had returned home to Rhiwbina to look after my Father whilst my Mother was in hospital in Cardiff. After she returned home, I needed a job and decided to apply for the position advertised for an air hostess in the South Wales Echo.

It was snowing heavily when I went for my interview to become a hostess with Cambrian Airways at Rhoose Airport. I can still remember what I was wearing – a long black coat and a bright blue woollen hat covering most of my hair. It couldn’t have done much for my appearance! At least I was warm on what was a long journey from Rhiwbina. I had travelled on the bus to Cardiff, then on to Barry and another bus to Rhoose Airport. I was interviewed by the Managing Director, Wing Commander Elwin, who was very handsome and charming. I didn’t hold out much hope of being employed when told they had received three hundred applicants!

A little while later, I was thrilled to hear I had been accepted.

I am not sure of the date I actually started but before we became air hostesses we were taken on board a Dakota aircraft and shown the escape hatches. We did not have a training programme as such but we were given a ‘manual’.

Pam Morris and I went to a tailor on Fenchurch Street to be measured for our uniforms and have further fittings. We thought they were very smart. I believe we went to a department store in Cardiff to choose light blue seersucker blouses, navy shoes, gloves and handbags to complete our uniform.

We had a few trips as passengers, supposedly to get used to flying although we couldn’t board one plane going to Jersey as the payload had reached maximum. We did eventually get to Jersey as passengers on a Dakota and I know I went on a Rapide, but am I dreaming that it landed on the beach?

I went to Le Bourget in a Dove and can remember listening to ‘Women’s Hour’, sitting in the cockpit crossing the Channel on the way to Southampton.

My first flight on the 3rd June 1955, I flew to Jersey in Dakota GAMSW and the pilot was Captain Perrott and First Officer Penrose.

There is a piece in T.G. Staddon’s History of Cambrian Airways where Captain Perrott tells of an incident when he had to make an emergency landing in an Auster in August, flying to Bristol with First Officer McKendrick and a stewardess.

I had a similar experience on my second day of flying (4th June) when Captain Carson had a forced landing coming into Bristol Airport. He landed some way from the airport but we could see the buildings. I was cramped in the back and was told to get out and push. I said “You are joking?” but no – First Officer McKendrick took one wing and I the other, and we pushed. Then the plane flew off, leaving us stranded. My high heels sank in the grass and I was grateful when an ambulance came and took us to the airport.

My story changes as the years go by but I reckon that day I went in two private cars, two taxis, two airplanes, one ambulance and a fire engine.

It was a long day and I still had to get home to Rhiwbina.

I flew with Wing Commander Elwin and First Officer Keeble.

We liked going to Speke Airport, especially when we had time for a meal, usually a super fry-up.

The 20th June 1955 was a very exciting day as it was the inaugural flight to Nice. Wing Commander Elwin and Captain Carson were the pilots and Pam Morris and I were the hostesses. We welcomed on board VIPs from Cardiff and Alun Williams (who recorded the event for the BBC). We left Cardiff 0820 arrived Bristol 0840.

The weather was not good when we arrived but the photographer took us to the Promenade des Anglais and took a few photographs. 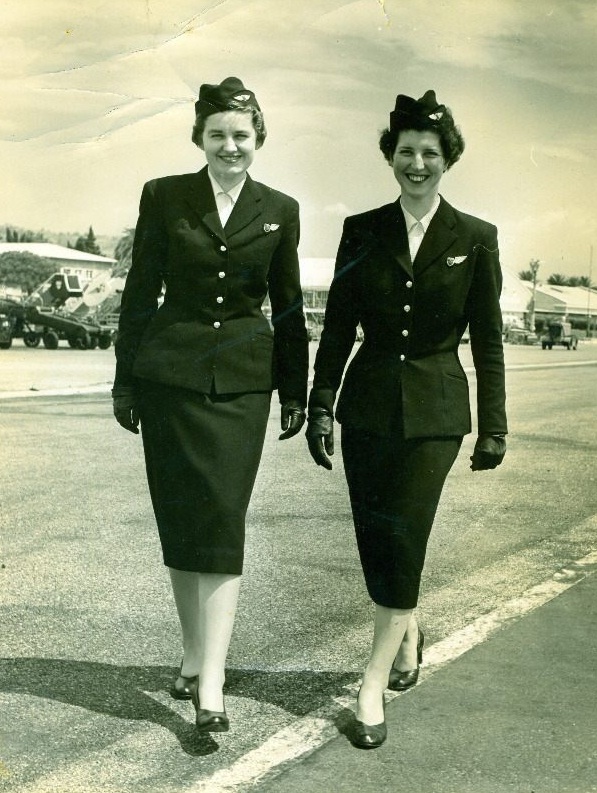 In Staddon’s book, it says that the Nice service was popular as there was there was plenty of time to spend on the beach. I left Nice at 10.25 and 10.30 on the two dates logged. No time on the beach for me!

I flew with Captain Carson (no mention of First Officer).

We were unable to take off for Cardiff as there was trouble with the engine and then the fog rolled in making visibility ‘on the deck’. I thought we would be spending the night in Jersey but we were able to fly out at 0030 arriving at Cardiff at 0140 hrs.

Here I must mention George Handy as he was a great character and used to pick me up in the company car at my home in Rhiwbina if I had an early start or was late getting into Cardiff. If I had an afternoon flight, then I had the tedious ride on the bus into Cardiff on to Barry then to Rhoose.

The next morning the 25th June, I was on the early flight to Jersey so he must have picked me up from home. I couldn’t have had much sleep as I left Cardiff at 0650 for Jersey. The pilot was Captain Perrot and again, there is no mention of the First Officer in my log book. We flew from Jersey to Liverpool, Liverpool to Jersey then Jersey to Cardiff arriving at 1540.

Although I have given the take-off and landing times I must mention that some time was also spent making sure the aircraft was ready to receive passengers.

We had a supply of magazines and sweets to hand around and there was a locked container for cigarettes. We couldn’t sell cigarettes until we were three miles out. On the 21st August for instance, there is a slip of paper showing an opening stock of 1375 and closing stock of 850. The Customs Officer was quite strict but we smuggled in cigarettes and whiskey for him.

Once the ground staff had closed the door and it was checked, the most important duty was to take the ship’s papers and log book stowed in the valise to the pilot in the cockpit. You had to make sure there were ‘five locks and two pins’ put on board and duly reported this to the Captain before we could take off.

I flew with Captain Gibson (no mention of First Officer).

We left Cardiff at 0825 but were unable to land at Jersey (log book says clamped at Jersey). We landed instead in Dinard at 1030 and we had a delicious lunch (the Camembert was superb.) We were able to leave at 1230 arriving at Jersey 1320. 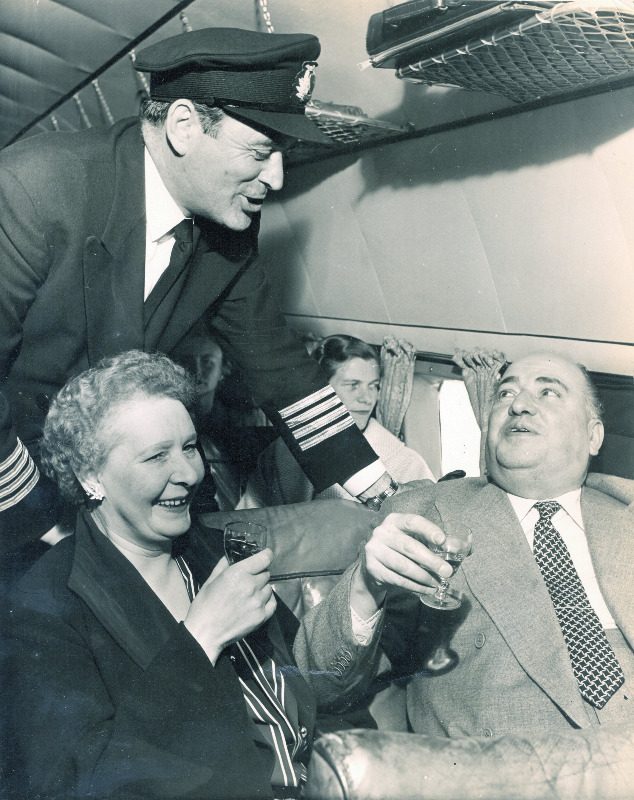 George Handy called for me very early that day for a take-off at Cardiff for 0555hrs. I can remember we saw some magpies in a field on the way and being very superstitious, we said that’s OK no worries – there’s more than one. “One for sorrow, two for joy.”

On this day I flew with Wing Commander Elwin and First Officer Twomey.

We flew from Cardiff at 0555 to Jersey. Jersey to Liverpool and Liverpool to Jersey then Jersey to Cardiff arriving back at 1505. We heard during this time that one of our planes had crashed but we didn’t know the details. We were worried all day and finally when we got into Cardiff we were told that Captain Carson had crashed in the New Forest and he had brought his plane down in such a way that although injured no one was killed except him. I was very upset. I had flown seven times with him and he was such a wonderful personality. I was told he was a bomber ace during the war.

Someone told me to have a cigarette. I didn’t smoke at that time but I accepted and I became a smoker. Cigarettes were duty free in Jersey so I was hooked.

I have recorded thirty-nine days of flying time in my log book. I am not sure of the dates of my employment, it certainly wasn’t very long. It was an experience I have never forgotten. I believe I was emotionally and physically drained by the time I gave in my notice. Some days were very long and I felt like a glorified waitress! I know that my parents were very worried. Even today my sister recalls them talking and worrying when I was late home.

I eventually returned to England to take a post-graduate course in Casualty Nursing.

My apologies for any mistakes or discrepancies in my little tale. It was a very long time ago!

Thanks to Gloria Gee and Garry Hillard for the information and pictures.