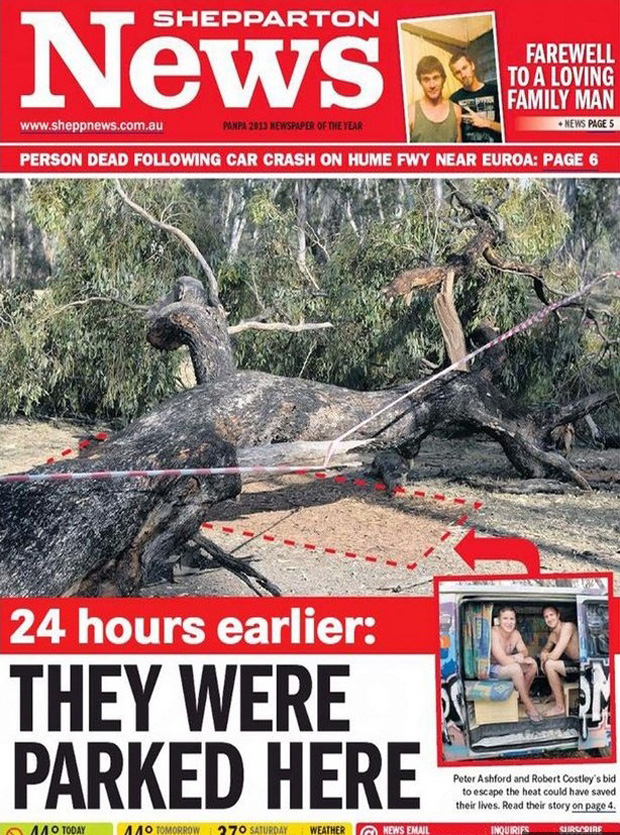 Two backpackers from North Cardiff have been making the headlines in Australia after a giant tree crashed onto their camp – shortly after they’d moved. Cardiff campers

Peter Ashford, originally from Whitchurch and Rob Costley, originally from Llandaff North, survived certain disaster by moving into the shade to escape the searing heat that has been gripping the country.

The pair said that they heard a ‘boom’ as a 50 foot eucalyptus tree crashed down as they slept in the city of Shepparton, Victoria.

Since the incident, the pair of campers have become a local media celebrities.

Mr Ashford told the local press: “If it had hit the van it would have ruined our plans but we would have worked something out. As long as you have your health that’s all that matters.”

He added: “We were really surprised to be honest, we didn’t think it was a big deal but I guess it is for such a small town.”

They were later told by a locals that the heatwave or an infestation of white ants could have caused the tree to topple.

The two met in Melbourne at the beginning of December. Before that, Peter had been travelling throughout Asia having left Wales in November.