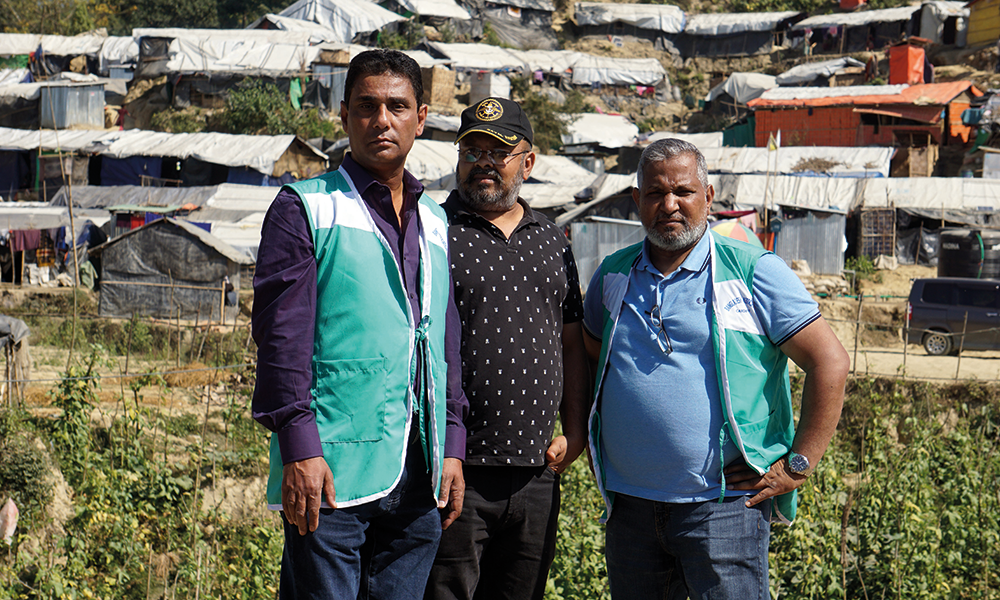 The purpose was to see for themselves the devastating effects of the ethnic cleansing currently being enacted by the Myanmar Military and local militia in the Rakhine State in Myanmar. The Rohingya Refugee Crisis has affected the lives of hundreds of thousands of people with currently over 800,000 Rohingya refugees living in makeshift camps after making their way across the border and through no-mans land.

The members of the Bangladesh Association were there to ensure that aid, paid for by the people of South Wales, got directly to those who need it the most. Nearly £40,000 was raised last November when Bangladeshi restaurants and takeaways from Chepstow to Bridgend donated their takings to the Relief Fund established by the Bangladesh Association. The event, a curry night on the 8th of November, was hugely successful thanks to the support of people like those in Rhiwbina, who visited the Juboraj for a meal, took part in the special buffet night or had a takeaway meal that evening.

Ana and his colleagues were at a camp called Unchiprang, as the trucks loaded with supplies arrived. Over the next two days, they assisted in issuing food supplies, clothing, cooking equipment and medicines to the devastated Rohingya people. The camp is a relatively new one having been established in September 2017.

Ana said that they were able to supply food parcels, clothing and medicine for up to 3,000 refugees with the money raised by the relief campaign. Cllr. Ali Ahmed said:

“When we saw the trucks arrive, we were so pleased and so proud to be able to represent the citizens of Cardiff and South Wales. We were thrilled that we could help make some difference to the lives of the children, elderly people and all the refugees in Unchiprang, who have so little at this time.”

The Bangladesh Association was accompanied on this trip by Dan Peterson, an artist and illustrator who, as well as being an Associate Lecturer at Cardiff Metropolitan University, has produced illustrated reports from Helmand Province, Afghanistan, for the British Army and from HMS Bulwark during operations to rescue migrants and refugees from the Mediterranean for the Royal Navy. His reports for BBC Radio Wales and BBC Online will soon be aired. Dan has set up a JustGiving page, to raise more much needed funds for the Rohingya Refugees. The page can be found at www.justgiving.com/crowdfunding/rohingya-relief-buef-dan-peterson.

“There are over 130 orphans in the orphanage and over 400 children attending the school in Unchiprang camp. They very much need our help to build new lives,” added Dan.