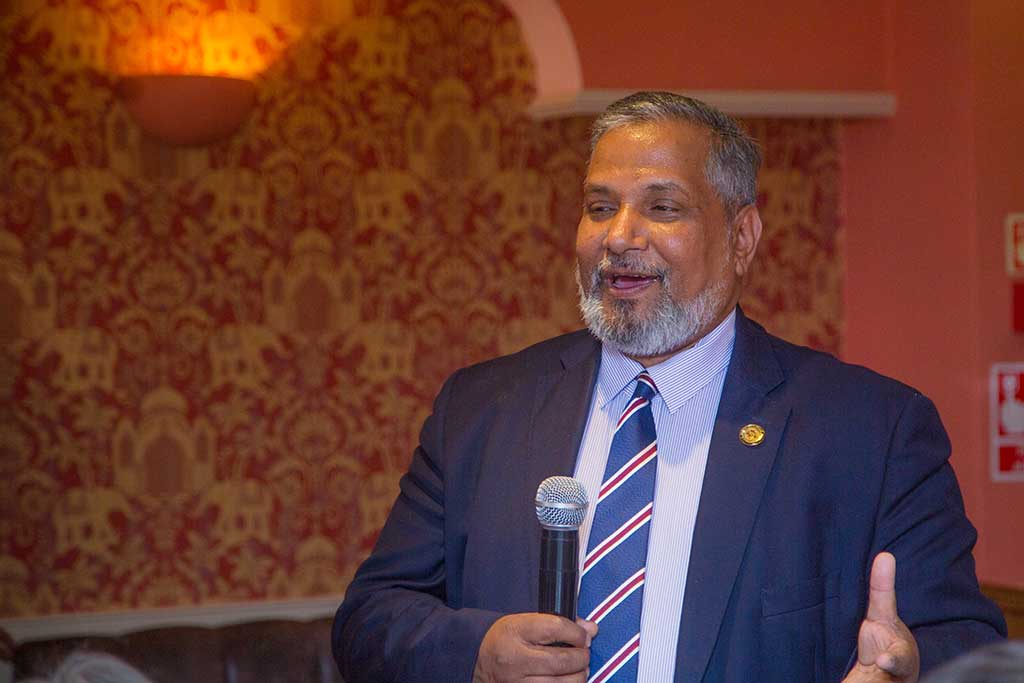 Rhiwbina’s Juboraj restaurant celebrates its 30th Anniversary this year. Owner Ana Miah tells the story of its beginnings to its near legendary status in the area

Since 1989, the Juboraj restaurant has been the jewel in the village of Rhiwbina, bringing in customers from all over South Wales and beyond. But had it not been for a phone call in the late 1980s, the legend that is the Juboraj may never have happened at all.

Owner Ana Miah is a well-known face in and around Rhiwbina. His story is one that’s rarely told. Part of Ana’s success has been the Bangladeshi heritage that he brought with him – and that his customers have lapped up.

“My dad came over to the UK in the 1960s and at that time, it was relatively easy for people from the sub-continent to settle and work here. My dad came first and then he decided that he wanted to bring up his family here too which is when the rest of us came over. My parents went back home to Bangladesh once we’d all grown up and that’s where they stayed until they passed away.

“I was actually born in Bangladesh but came over to the UK when I was about 7 or 8 years old. I grew up in Birmingham where I did a normal secondary education. Once I left school, I decided to go into the restaurant business, not out of choice but I was pushed into the deep end and didn’t have a say in the matter. But once I was in, I thought I’d give it the best I could.

“At the start of my career, I was running a small family restaurant in London that a few of my family members used to own. My brother-in-law and business partner was involved in running a restaurant in Llantrisant. The family had a history of working in the restaurant business.

“As we progressed through the 1970s and 80s, more authentic ingredients became available and these were reflected in the menu. We could use more exotic spices. Even now, we find that our food is very similar to what we would have in our own homes. A lot of care and attention is put towards each meal.

“So, I had a phone call one day from my brother-in-law and my elder sister, who are from Cardiff. He had a vision of opening a restaurant similar to what we have here in Rhiwbina now but he knew that he couldn’t do it on his own. He was looking for someone with a bit of charisma and youth to do the front of house stuff and I was in my early 20s then.

“I came down from London and looked at the premises in Rhiwbina. I fell in love with it straight away. Its location in the village and its size were ideal. At that time however, it was difficult for me to make the transition from London to Cardiff because I was planning to settle down. But I said ok, let’s give it a try and the rest is history.”

Getting the restaurant to the point of opening was no easy feat.

“Once we’d seen the site, there were planning and other issues that we had to overcome. At first, there were some objections from the local residents. Eventually people wanted something here as the property had been empty for several years.”

The Juboraj opened its doors for the first time on 8th February 1989.

“I remember the day very vividly,” recalls Ana. “It was a full house and you could say that I was very enthusiastic. I was carrying a tray full of drinks to a table and in my haste, I lost a pint and it tipped over one of my customers! But they were so nice and so good, and took it so well – but I was mortified! I’m able to laugh about it now.”

“We opened and actually put Rhiwbina on the map because we had people travelling from all over, not just Cardiff but the whole of South Wales.

Integrating into the community when we first opened was crucial. We’d faced restrictions on our trading hours and everyone was keeping an eye on us because they thought that there’d be late night commotions and that people would be coming here and degrading the village. That’s the notion that most people had, but people soon realised that this wasn’t the case.

“Even from the offset, our opening hours were a lot shorter than your normal late night curry houses. People quickly realised that we needed to be supported and not objected to.”

Bringing new ideas to the menu has been vital to the development of the business over the 30 years.

“Such is the competition that you have to try and be better than everyone else. More and more chefs are experimenting with new and exotic ingredients and coming up with innovative ways of presenting their dishes. We are so blessed with so many cuisines here in the UK that we sometimes look at something and think ‘that’s a good idea. Maybe we can add an Indian twist to it.’”

The name Juboraj has taken on a meaning all of its own, especially in Rhiwbina where the name is synonymous with good food with friends.

“The name Juboraj is actually an old Mogul term,” says Ana. “The correct pronunciation of it is ‘Yuboraj’ with a silent ‘J’ and it means heir to the throne. In the old Mogul dynasties, you’d have Juboraj and then a name and they’d be the next person to the throne. It’s a name that I came across before we opened. It stuck with me and I thought that it would be a really good name for a quality restaurant.”

Becoming part of the community has become integral to Ana’s thinking. He has achieved this by embracing local events and groups.

“After we opened, I got to know local residents and once people got to know me, they had confidence in approaching me. The first major sponsorship I did was for Rhiwbeina Primary. One of the PTA members was eating in the restaurant and asked me if I’d like to be involved in helping their PE Department which was somewhat short of proper football kits.

“So I went to find out how much it cost as I had a friend who owned a sports shop on Whitchurch Road. I eventually gave them the whole set and they were over the moon. I still have the photograph of them.”

“As a businessman, I was also interested in keeping the parents happy through the school sponsorship. I’ve lost count of how many I’ve now sponsored. Giving to the community is the way that I’ve always been. That value has always been with me – going the extra mile to help others. It was something that was instilled in me by my parents. It’s the upbringing that I had and I’ve always been taught that more people are less fortunate than you are. It’s also a great way for any business to engage with the community and a way of enhancing their achievements in business. We can spend thousands on marketing and promotions but the local community’s word of mouth is far greater in value than any sort of marketing.”

Juboraj has supported local and international charities and organisations over the years and continues to do so now.

Today, Ana has five restaurants under the Juboraj banner. The Rhiwbina venue is the original and the flagship from where it all started, and is still the main hub. Over the last 30 years, the restaurant has fed tens of thousands of people, and has been frequented by many well-known names.

“I remember one busy Saturday night, we were chock-a-block when I had this phone call from a man who said he’d like to book a table for ten people at 9pm. I told him that there was no way that we could do anything and then he told me that it was for Tom Jones. But I said that even if the Queen wanted to book, I’d have to turn her down because I was so busy looking after my other customers. A couple of weekends later, they did come back but booked way in advance to make sure that they got a table!

“Tom came and many times after that. He was living in the US then and whenever he came back to Pontypridd, he’d make sure that he came to the Juboraj. He was such a quiet individual whenever he came. We never had camera phones back then so someone would have to run off and find a camera!”

Politicians, musicians and sports stars have also settled down for a Juboraj over the years. In 1997, the then Prime Minister John Major came to the Juboraj for a meal.

“I’m 55 and wanting to wind down a bit now,” laughs Ana. “I still enjoy it but I’m more involved in community projects these days. The younger members of the family are starting to get more involved with the business, perhaps getting ready to take over the reins.”

A proud Rhiwbinan, Ana has the village running through his veins.

“I am a Rhiwbina resident. The business has been here for 30 years but I’ve also lived in the village for well over 20 years. It’s a great place to live. I admire the Village Events for creating and sustaining the village atmosphere throughout the year. I help them with their fundraising and they use the restaurant for their meetings.”

Juboraj has gained a reputation for being a quality establishment and synonymous with not just Asian restaurants, but the restaurant sector as a whole.

“That’s been a great achievement,” says Ana. “And on a personal note, because of the Juboraj, I’ve become quite well-known, not just in South Wales but across the UK. The success of the business has given me a platform to be a part of so many initiatives and ways of improving and enhancing the industry.”

Celebrating 30 years in the village, the Juboraj continues to consolidate its place within Rhiwbina’s community with every meal that’s served.

To celebrate 30 years of Juboraj in Rhiwbina, they are giving every group of four customers a complimentary bottle of Prosecco.

Offer runs from 7th June 2019 until 31st July 2019. Fridays and Saturdays only. Rhiwbina only. Book in advance to take advantage of the offer and please mention Rhiwbina Living when booking.