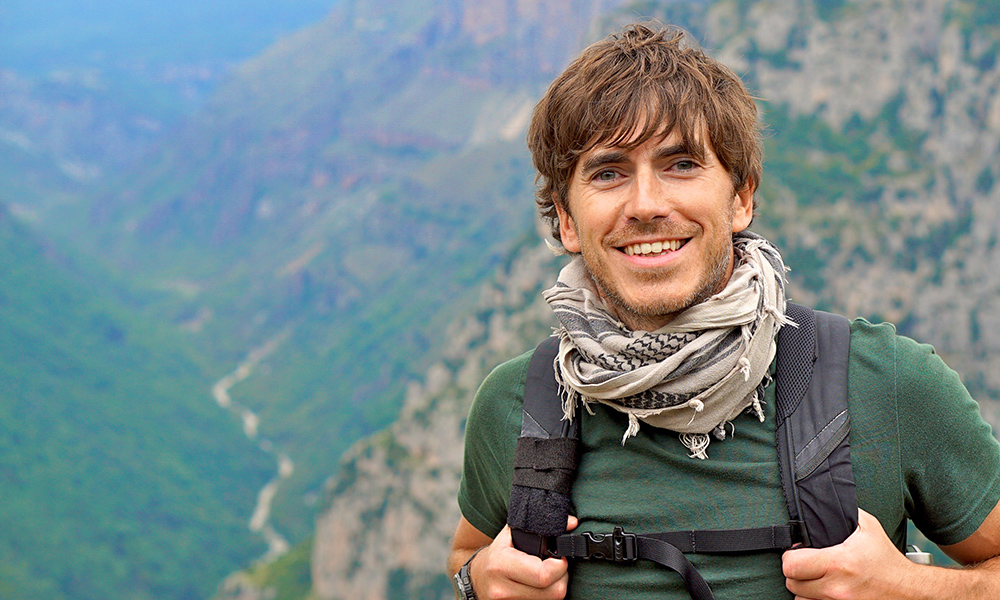 Simon Reeve is an adventurer, New York Times best-selling author and TV presenter who has travelled to more than 120 countries making multiple award-winning TV series. And he’s coming to Cardiff

After a decade spent making more than 70 programmes, Simon Reeve has become a familiar face on British TV, well known for his extraordinary foreign journeys.

Most of Simon’s documentaries combine travel and adventure with global environmental, wildlife, and conservation issues, and have taken him across jungles, deserts, mountains and oceans, and to some of the most beautiful, dangerous and remote regions of the world. He’s dodged bullets on front lines, hunted with the Bushmen of the Kalahari, dived with manta rays, seals and sharks, survived malaria, walked through minefields, tracked lions on foot, been taught to fish by the President of Moldova, adopted by former head-hunters, and detained for spying by the KGB. His adventures have been broadcast in dozens of countries, enthralling millions.

But Simon’s travelling bug definitely wasn’t part of his upbringing:

“I definitely wasn’t born into it. When I was a kid, we only went abroad once when we took the ferry to France to go camping. I didn’t get on a plane till I was working. When I was growing up, people didn’t travel in the way they do now. People have forgotten that. I remember the first Spanish and Greek restaurants opening in London during the late 1970s. That was the result of British people taking Freddie Laker-type flights abroad. I only came to travel and adventure as an adult.

“I grew up in tropical Acton in West London. My adventures were restricted to riding my BMX and my grandmother’s magical mystery tours. She would take my brother and me in her car when we were very little to explore exotic, unknown places like Hounslow. Sometimes we even got as far as Chiswick! I never imagined I’d live the life I have today. My aspirations and dreams were very limited.”

But it would be a while before Simon got the break he was looking for.

“I was on the dole for a long while. Then I got a few jobs. I ran some charity shops, but organising people of a certain age into a roster was a very tricky art. I worked in a jewellery shop for a day and at the Ministry of Defence for half a day. After I walked out, Special Branch came looking for me because I had worked in a secret department. I got turned down for a job as a white van driver, even though no one else applied for it. I was lost.

“Eventually, I got a job as a post boy on the Sunday Times and my world began to open up. I owe my career to Andrew Neil – I’m sure you’ve rarely heard that sentence before! I was very lucky. His idea was to give the post boys an opportunity to have a crack at working on the paper. Everyone else on the paper was Oxbridge, and I was very London. I was pretty unusual, but I was keen and eager and they gave me a chance.”

Simon’s career was about to take off – in more unexpected ways than he could ever imagine:

“I was this pathetic kid suddenly thrown into an environment where people were doing very exciting things and working on serious investigations. I carved out my own niche – and that was the making of me. First I became an expert in fixing these vital big photocopying machines they had, so they couldn’t sack me. Then I fell into investigating terrorism, as you do. I started researching the first attack on the World Trade Center in 1993, and eventually wrote the first book on al Qaeda, which came out in 1998. Nobody read it. Then I wrote some other books and worked on hardcore investigations where I spent time undercover.”

It would be the events of 9/11 that thrust Simon into the spotlight for the first time.

“Suddenly I was chucked into the world of TV. I’d written the only book in the world about the biggest story of the time. I also knew people who died as the towers came down – I’d met them when I was researching my first book.

“The BBC then wanted me to make a series for them. The first ideas were a bit daft. They included wanting me to infiltrate Al Qaeda. I didn’t think that was a very good idea. In the end, we settled on the idea of going on adventures in parts of the world that weren’t often on the TV, and into which we would try and work light and shade, both adventure and issues.

“The first BBC series I did in 2003 was called Holidays in the Danger Zone: Meet the Stans, and it was all about my journeys in the Stan countries to the north of Afghanistan, including Tajikistan and Kazakhstan. I loved it from the first day of filming. It was very well received, which was a surprise to me as the presenter. So the BBC had me back, and since then I’ve made more than 100 programmes around the world.”

Simon went on to become a New York Times best-selling author and TV presenter who has travelled to more than 120 countries, making multiple award-winning TV series for the BBC. They include , Sacred Rivers, Indian Ocean, Tropic of Cancer, Equator, Tropic of Capricorn, Pilgrimage, Ireland, Australia (Winner of the British Travel Press Award for Broadcast Travel Programme), Greece, Big Life Fix, and his two new series Turkey (2017) and Russia (2017). He has received a One World Broadcasting Trust Award for ‘an outstanding contribution to greater world understanding’, the prestigious Ness Award from the Royal Geographical Society, and the Special Contribution Award at the Travel Media Awards.

“Travel teaches us that we should embrace life and not live it on our knees. It’s a wonderful and immediate way of pushing our buttons and exciting our senses. We have an enormous planet of seven billion stories and magnificent sights to see and incredible food to eat. Anyone who isn’t mortgaging their grandparents or their grandchildren to get out in the big world needs their head examined!”

Many of Simon’s adventures have led him to some of the most extreme places on earth.

“In the city of San Pedro Sula in Honduras – the deadliest place in the world outside an active war zone – two colleagues and I went into a prison controlled by the inmates. It had thousands of men crammed into a very tiny space. It housed some of the most dangerous people on earth, people who have skinned other gang members alive. It was a cross between Diagon Alley in Harry Potter and an 18th-century sweatshop. It had all sorts of shops like a barber’s and a café, and people were making candles, clothes and wigs in their little cell factories.

“We thought of going in with special forces as our guards, but they would have been ripped apart, and the inmates would then have turned on us. So we went in with the very best bodyguard anyone could have in that situation – the Bishop of San Pedro Sula, wearing a very large crucifix. He could look after us and stop the ludicrously dangerous gangs from holding us hostage or chopping off our heads.

“We met men with tattooed tears running down their cheeks, each one indicating a person they had killed. We met the leader of one of the most fearsome gangs in Central America, and all he wanted to talk about was this Nativity scene made out of recycled rubbish that he had been building in the prison yard. A panel was coming round the next day to judge all the prisoners’ Nativity scenes. It was bizarre beyond belief. That is how surreal life on this planet can get.

“When you walk into somewhere like that, your senses are so alert to the danger you don’t have the chance to experience fear. After visiting the prison, we sank quite a lot of whisky as we did a post-mortem on the experience.”

These days, Simon is filming once again for the BBC – but this time in the Mediterranean.

“Nowadays we can go anywhere in the world, but sometimes we overlook what’s closest to home. I’m just blown away by how extreme life around the Mediterranean can be. We forget there are magical and horrific places close to our own doorstep.

“I’m very enthusiastic about the world. Part of my job is to go ‘wow!’ a lot – and I can’t stop doing that in real life because that’s how I really feel! I also have a great deal of curiosity – that’s crucial – and I’d like to think that I do care. I cry a lot. I get very emotional and uplifted by the sights and people I meet. An openness to other people really helps. That is how we understand each other and how we break down the barriers that divide us.”

Simon will be visiting Cardiff on his latest travels, as part of his one-man show that’s touring the UK.

“I’ve had some magnificent adventures and met some of the most inspiring people on the planet. So obviously I’ve got lots of tales from my travels, and this show is a tremendous opportunity to share them with audiences across the UK. There’s a lot that I see and film that never makes it into the programmes, so there’s also behind-the-scenes stories to tell and footage to show.

“I also like doing things that are a bit challenging and nerve-wracking – and performing a live show is certainly a challenge that should get the ticker going. I like that adrenaline rush.

“I’m sure walking out on stage is going to be scarier than some of the experiences I’ve had on my travels. Imminent death doesn’t bother us as much a social embarrassment!”

Simon Reeve’s first-ever theatre tour will feature the world-famous journalist recounting tales from over 15 years of travelling to the most remote and extreme corners of the planet.

From being chased by pirates, hounded by the Mafia and bombed by Columbian barons, Simon Reeve has travelled through over 120 countries and his BBC documentaries have sold to over 60 countries around the world.

Since making the leap to television, Simon’s adventures have been broadcast in dozens of countries, enthralling millions.

An Audience with Simon Reeve is not only a fascinating and educational show, but at times shocking, inspirational and hilarious! The show includes exclusive multi-media footage and a 20 minute Question & Answer session. Simon is coming to St. David’s Hall on September 20th and you could be there.

To be in with a chance of winning a pair of tickets, please complete the title of Simon Reeve’s new tour – An Audience With…

Please email your answer to SDHpress@cardiff.gov.uk by Friday 14th September 2018 along with your full name and address, plus a phone number.