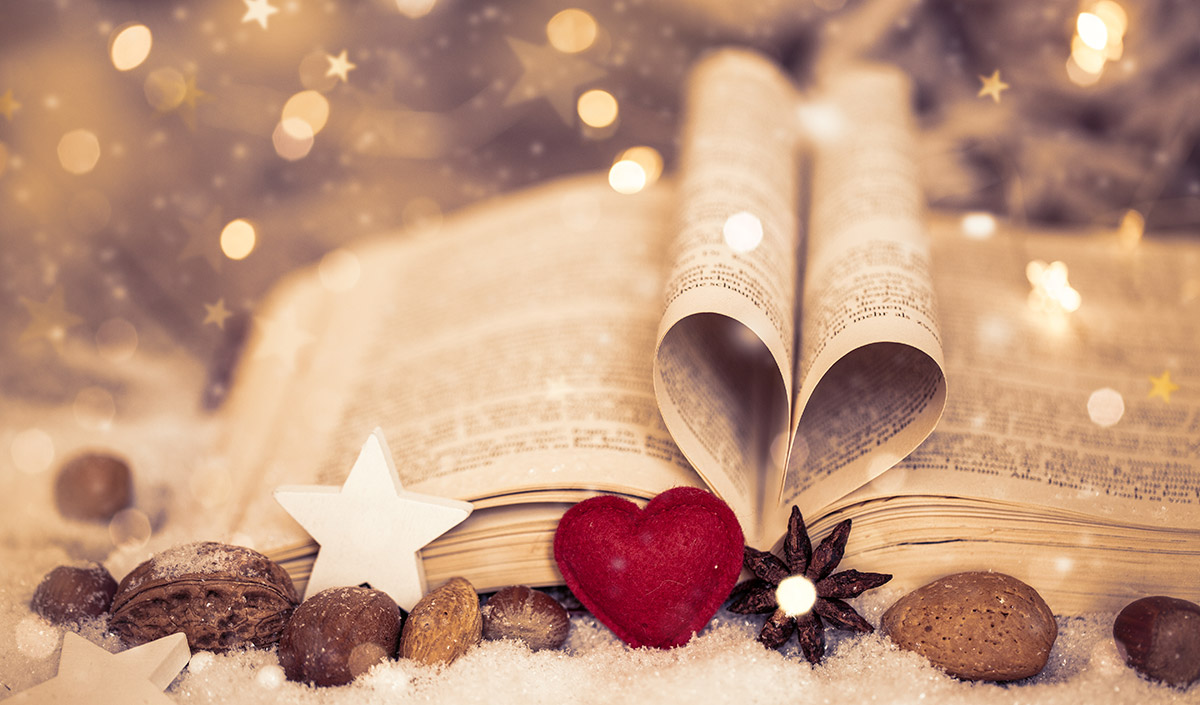 “How much for this one?”

Megan Alexander held up a well-thumbed copy of Tess of the d’Urbervilles.

“Ok. Thank you,” replied Megan. She clung to the copy while she scoured the small towers of books laid out in front of her.

Megan loved books. Every autumn, before she met her fiancé Will, she’d head alone to Hay-On-Wye to browse the musty old book stores. She’d spend her days there browsing, sipping hot coffee and just being herself.

But things were different now. Life was all-consuming and the forthcoming wedding had practically taken over her life.

These days, she could recapture small dollops of her past magic by visiting the winter jumble sales in the village in the hope of finding herself a bargain book.

She’d had her eye on the local church jumble sale for weeks and was one of the first to get there. And now, here she was, stocking up on old classics. It made her heart flutter.

The table in front of her was full of second-hand books, all neatly arranged into small piles. As far as Megan could tell, they’d all been arranged into genres. Down the front was romance and at the back sat books on ships and the military.

Stood behind the table was an old lady who Megan recognised as the one that lived alone in the cottage by the stream. It looked like she was having a proper clearout.

Megan was slightly disappointed that nothing else grabbed her attention. The books were mostly run-of-the-mill romance with 60s looking covers on the front of them. But as she leaned over to pay the woman her 50p, Megan knocked one of the piles over.

“I’m so sorry,” said Megan. “I’m so tired these days, I don’t know what I’m doing.” She helped the old woman place the books back in a pile and it was then that she spotted a book she’d been meaning to read many years ago. She picked it up.

“Ah yes. The Age Of Innocence,” said the old woman. The old lady smiled for a moment as Megan let her eyes wander over it.

“I’ll take that too please! I’ve been meaning to read it for years!” said Megan.

“You can have that one for free. It was my husband’s favourite. He’d be happy to see it going to a new home.”

“Yes,” said the woman. “After 50 years of marriage, I know what my husband would want.”

At that moment, Megan’s phone rang. She struggled to pull it out of her pocket to answer it. It was Will.

“Where are you? You said you’d be an hour. It’s an hour and a half already,” he said.

Megan slipped her phone back into her pocket and paid for her book. She left the old woman and headed out into the winter night, buttoning her collar to the cold and the damp.

It wouldn’t be until later that night that she had a chance to look at her new offerings.

“I’m going to have a bath,” she said to Will as she climbed the stairs with the books under her arm.

“Sometimes I think that you prefer those books to me!” Will called after her.

Megan needed to get away from Will for a while. He was constantly stressed and his stress levels had ramped up even more with the big day arriving in a few weeks. He always seemed to get uptight around big days, and this was possibly the biggest day of all. She was hoping that he’d calm down once it was out of the way.

Megan took herself to the bathroom and locked the door behind her.

“Don’t be too long in there,” she heard Will call but she turned on the taps and filled the bath with warm bubbles.

When it was full, Megan got in and sank down under the water. She tried to let her muscles go and relax. It wasn’t very often that she got time to herself these days.

After a while, she dried her hands and picked up the copy of Age of Innocence that she’d bought. She slowly prised the book open, but to her surprise, a small envelope started to slide out.

She caught the envelope before it could hit the water. Then she carefully pulled it out and set the book to one side.

The envelope looked old but it was unsealed and in good condition. She could feel that there was something inside so she opened it and pulled out a folded note.

The paper was still firm, which was pleasing since the hand-written note at the top of the page read 25th January 1946.

I trust that this letter finds you well. It’s been a long time since we last spoke. I’m finding myself with somewhat of a heartache. Since I’ve been demobbed, I’ve found life hard here in London. I miss the comforts of home and I miss you. I’m still engaged to Rachel but I know deep in my heart, that it’s not the right thing to do.

Papa says that I should have made it work with Hannah – he’s even invited her to our Easter dinner this year. I wish that my parents would stop meddling in my affairs. I want to get married for love, not to please them.

Megan sat up in the bath and hunched over the note. She could hear Will calling from downstairs but the voice from the past was holding her attention. She continued to read:

I keep making excuses for delaying the marriage – lack of money. Surely that’s not right? I know it’s not right.

I don’t expect answers from you. I just feel as if I have no one else to talk to since I’ve moved here. I feel very alone. I miss our chats and our walks in the park. I miss the laughs we used to have. We could just be. They were our moments, moments that no one will ever be able to take away from us and I am so grateful for our friendship. Thank you.

I just don’t want to spend the rest of my life unhappy.

It took a few minutes for the words to absorb into Megan’s mind. What a sad story. A story that had already been played out, even before she was born. Megan took out the second letter from the envelope. It too was hand-written.

Dearest Tom. So lovely to hear from you and I sympathise with your predicament.

I’m not the best at giving advice but all I can suggest is that you marry the one that you love the most.
Forever your friend, Anne.

Megan placed the note on top of the book and sank back down in the bath. She wondered what had become of Tom, and whether he had settled with Rachel or gone back with Hannah.

Megan’s phone buzzed. Will had given up shouting from downstairs and was trying instead to contact her on the phone. She answered.

“You going to be long?” asked Will.

Megan was up early the next morning.

She popped the kettle on and stared out of the kitchen window onto the early morning garden.

“Where are you off?” asked Will.

“I need to return something,” she replied.

“Why do you need to return it?”

Megan felt that she couldn’t tell him. He’d probably mock her or belittle her.

“What time will you be back?”

The safety valve in Megan’s head kicked in and she disengaged. She was still thinking about Tom and whether he had gone ahead with his marriage to Rachel. Maybe he’d gotten back with Hannah and worked things out.

Megan turned to look at him. He was no longer the handsome man she’d met ten years ago. He still looked the same physically, maybe a little less hair and a little more belly. But his actions over the last ten years had done little to enamour her. His soul was empty and in her eyes, he was now ugly.

“Do you remember when we first met?” she asked him.

“Do you remember when we first met?” she asked again.

“And you bombarded with me with messages about how much you wanted to be with me?”

“I wouldn’t say bombarded. But I had to hook you in somehow.”

“About how much you wanted to marry me and spend the rest of your life with me?”

“You created a folder for our wedding. You decided where we were going to have it, what the outfits were and who was coming.”

“Yes. I loved you. I’ve been waiting ten years. Half those people on the list are dead now. I’m just glad we’ve finally got our act together and can get this thing done.”

Megan looked at him.

“And now you bombard me with messages asking where I am all the time.”

“I thought that you adored me. I fell for it.”

Will laughed. “Of course you fell for it. Who could resist me?”

Megan paused for a second and then forced a smile.

“What time are you back from Edinburgh on Friday?” she asked.

Later that week, Megan sat on the park bench. She was exhausted. She had spent the day packing Will’s belongings into boxes and had driven it to the storage place. He wasn’t coming home. Tom’s note had made her realise that life was too short to not be happy. She didn’t need anyone. But she wouldn’t be starting all over again. She’d be starting from a place of experience. And that would make all the difference.

She knew that she had a future to write. And it looked nothing like her past. Before she knew it, she’d feel the soft sunshine of spring on her face. And she knew that she’d be ok.

She slipped her hand into her pocket and pulled out the envelope. It needed to be returned.

She headed to the cottage by the stream and knocked on the door.

The old lady from the Christmas jumble sale opened the heavy door.

“Hi. I’m so sorry to bother you. I wanted to return this book,” said Megan. She held out the book.

“Is there something wrong with it?”

Megan smiled. “No. Nothing wrong with it at all,” she said. “In fact, it’s already served its purpose.”

Megan took the envelope out from her pocket and held it out.

“I also found this inside. From a man called Tom. I don’t know if you know him.”

The old woman took the letter and put her fingers to her mouth.

“Oh my. Yes. Thank you. I knew Tom very well. Sadly, he left this world about twenty years ago. You can have the book – I no longer have need for it but I’ll keep the note if that’s ok.”

“Yes of course,” said Megan. “Thank you for helping me. Have a lovely day.”

“What was your name?” asked the old woman.

“My name’s Megan. I live a few streets away.”

“Nice to see you again,” said the old woman. “And thank you for returning the note.”

“No problem. Sorry. I didn’t take your name,” said Megan.