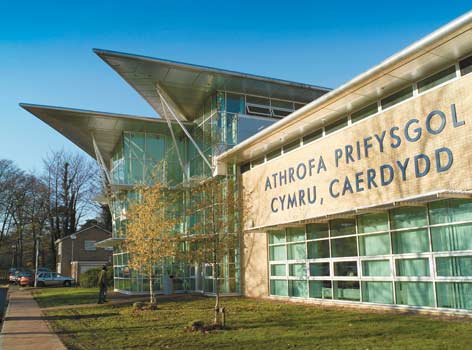 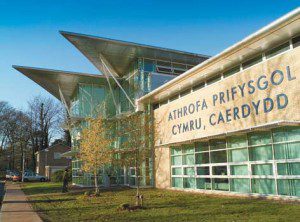 Vocational education first made its appearance in Llandaff when the first phase of college buildings were built on a sixteen acre site bounded by Western Avenue, the River Taff and Llandaff Cathedral cemetery. They were officially opened by His Royal Highness, the Duke of Edinburgh, on the 1st December 1954 – the first students having entered the College in September 1953.

The College had the stated policy of providing the preliminary training of engineering and building trade students, and was to act as a feeder college to the Cardiff College of Technology and Commerce in Cathays Park. Its first and only Principal was Joseph Cotterell.

Following its opening, the next two decades saw the dramatic growth of the College from a relatively small establishment to a major provider of further and higher vocational training. The reasons for this development were twofold. Firstly, there was the transfer out of all low-level vocational courses from the Cardiff College of Technology and Commerce, and secondly, there was the national trend of employers promoting Apprenticeship Schemes and releasing their young employees to attend day-release courses at college.

The Governing Body of the College, under the chairmanship of Councillor William Groves, consisted of representatives of the Cardiff Education Committee and the Chairmen of the various Advisory Committees established within the College to ensure close links with local industry and commerce.

Initially, work on the College was organised by two departments – an Engineering Department and a Department of Building.

In 1957, a third department – for Science and Mathematics was established.

The 1961/62 academic season saw the start of numerous courses in the newly-formed Department of Chemistry and Biology. They were the forerunners of courses that would result in the College becoming recognised as a centre of excellence for Biological and Paramedical Studies in the UK. These courses later formed the nucleus of a series of applied degree provision in such areas of study as Applied Biology, Chiropody, Dietetics, Medical Laboratory Technology, Speech Therapy and Dental Technology.

This rapid development of course, resulted in an equally dramatic increase in the full-time teaching staff of the College from a total of 21 in 1956 to 130 by 1963.

Despite the second and third phase extensions of the College being completed by 1963, (and officially opened by Sir Edward Boyle, Secretary of State for Education and Science), and the use of such out-centres as Insole Court, this rapid development resulted in Llandaff College experiencing accommodation problems. In September 1963, the Commerce Department was transferred out of the College to premises previously occupied by Canton High School in Market Road.

The next major development of what had now been renamed Llandaff College of Technology was in 1971, when the College was awarded new Instrument and Articles of Government, and gained two additional departments – a Department of Maritime Studies and a Department of Printing Technology.

1973 saw the opening of the Cardiff School of Speech Therapy in its own purpose-built accommodation, together with additional science laboratories, a new library and student recreational facilties forming the fifth building extension programme.

Maritime Studies, previously run at the Reardon Smith Nautical College in Fairwater, were housed in purpose-built accommodation on the Llandaff campus. It was officially opened by HRH Princess Margaret in 1976, while Printing Technology, which had previously been administered by the Cardiff College of Art was also established on the campus at the same time.

UWIC, with a student population exceeding 12,000 and with students from 128 countries worldwide, has its own administrative centre on the Llandaff campus and has retained links with the City of Llandaff, with students, staff and members of the public attending the Annual Carol Service at Llandaff Cathedral every Christmas. This event was established in 1955 and will now be in its 55th year of celebration.