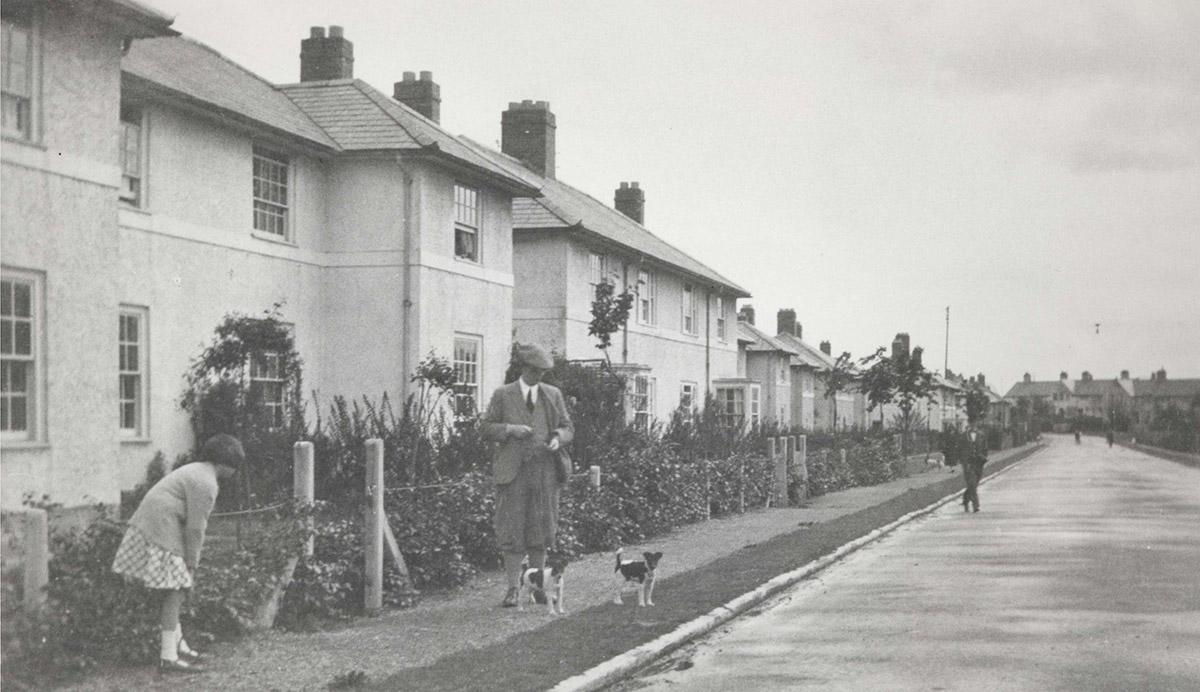 My life in the village began in 1939 when we moved from Canterbury to 39 Pen-y-Dre.

Earliest recollections however stem from 1941 when hours were spent at night during air raids in our Morrison shelter (a dining room table by day).

Staying with us at the time was a young girl evacuee from London. One of the raids resulted in a bomb basket landing between our gate posts. My dad had a blue Morris Minor (OD1181) which he garaged in one of the two garages opposite, a Mr Evans had the other.

In 1942 I listened to daily reports on the wireless of the North African battles and victory at El Alamein. Our wireless ran on a battery which we took to Barrauds in the village to be charged when necessary. Next door neighbours were Mr & Mrs Wilkins. Sadly we heard one night that their son Herbert had been killed in action.

My days usually began with raking out the fire grate before laying and lighting a new fire. Breakfast consisted of porridge and a boiled egg. We kept chickens in our garden, giving us fresh eggs daily. Mum had lived in Malaga and gave each one a Spanish name (Rosita, Pipita, Juanita etc). The chickens attracted rats which we killed regularly, cutting off their tails and nailing them to the side of our garden shed as souvenirs. One rat proved elusive so we shot it with a 4-10 shotgun.

Ambulance trains often passed, bound for Whitchurch, bringing wounded home from the war. Jimmy Taverner and I sometimes watched from the road bridge at Whitchurch as the wounded were taken off for transfer by road to the hospital nearby.

Dad had two allotments in Pen-y-Dre providing us with fresh vegetables for much of the year. Food shortages resulted in all of us having ration books so we had to use our coupons when purchasing sweets from Arthur Davies, whose shop was next to the Midland Bank.

From 1942 to 1944, I attended Rhiwbina Junior School. The headmaster, I think, was a Mr Pugsley and my teachers were Miss Emrys and Miss Proud. We were all given 1/3 pint of milk each day. When the air raid siren sounded we all had to run home quickly.

Pen-y-Dre often became flooded when the brook overflowed after heavy rain. The water would creep slowly down the road which gave us time to roll up the carpets, take them upstairs and raise the furniture on blocks to minimise damage. In 1960, the road culvert was widened which rectified the problem.

Pleasures were simple in those days and the Rhiwbina brook was a magnet to youngsters, giving us hours of entertainment catching bullyheads and other small fish. One day I caught a small trout which my mother cooked for my tea. Occasionally we used to go through the culvert under the main road. You had to maintain a crouching position as you went through because the roof was very low.

The culvert turned to the left after a short distance and for a while in the centre each end was not visible, at this point, it was very dark and only the trickle of water could be heard. We feared rats but never saw one. The tunnel then turned again to the right when the exit could be seen. We always entered with the flow under Brook Garage to emerge in Pen-y-Dre. I think I went through about four times, always with two or three others.

Often on Sunday mornings, my dad took me to Cardiff docks at 6am and I went on board many ships where he tested for gas prior to hot work taking place. We sometimes had to board on a narrow gangplank with no railings and also climb down and up the long ladders in the holds.

During the journeys to and from the docks, I used to sit on his lap to steer the car and change gear which I found exhilarating being so young. Unfortunately, my legs were too short to reach the pedals. On some other Sundays, a group of us used to cycle to Penarth baths and back.

Our bread was delivered daily by Charlie who worked for Idris Evans and came with a horse and two wheeled cart. Occasionally his horse sat down, resulting in the loaves of bread being deposited in the road, much to our amusement. Milk was delivered by Poyners with a horse and four-wheeled cart, later with a small van. I often helped with the milk deliveries at weekends which consisted of silver-topped bottles for pasteurised milk, gold-topped for Tuberculin Tested, and small narrow-necked bottles for goat’s milk, which few people bought. I met many people in Rhiwbina whilst on these rounds and at Christmas often collected over £5 in tips when my pocket money at the time was two shillings (10p).

One day the horse became frightened in Heol Wen and began to gallop towards the junction with Pen-y- Dre with John Poyner tugging at the reins and me hanging on to the roof rails at the back. As we turned right into Pen-y-Dre, which was unmade and very rough at the time, some empty crates of bottles flew off the roof of the cart. It careered down the unmade road bouncing about with bottles rattling and more fell off before John Poyner brought the horse under control at the end of the road near the golf links entrance. It was an experience I have never forgotten.

Groceries were bought from Miss Tanner whose shop was next to Duggan & James, or from the Co-Op where our membership No was 26068. Meat came from Raybould and fish from Excell in Beulah Rd. My favourite shop was Silvesters, where my first train set came from. Trimmers had a greengrocers shop in Lon Fach. About this time a Fish & Chip Van visited the village weekly. The fish and chips were superb and cost about 1/6 pence (7.5p today) they were always wrapped in newspaper.

An air-raid shelter made of brick, stood on rough ground where Rhiwbina Library now stands and girls were sometimes entertained within in ways their parents would not have approved of. Adults seldom ventured inside which was dark, damp and miserable.

After two years at Rhiwbina Junior School, my parents sent me to prep school in Cardiff which entailed daily journeys by train. Penarth Grammar pupils used the same trains and we had great fun on the afternoon return journeys when no adults were present. During these daily trips, I became very friendly with Ann Mathews who had a long blond pigtail; she attended Penarth Grammar and lived at Coryton. We used to meet each evening at Queen Street station, share a Chelsea bun purchased from the station café, and then travel home together on the 4.30pm train.

During summer weekends, we used our railway season tickets to travel to the beach together at Lavernock and Swanbridge and by Western Welsh bus to Southerndown. Her family moved to Durham in 1948 and I was devastated. Though we wrote to each other for a while, we never met again. She remains forever in my memory.

The new prep school in Cardiff had a very strict regime which resulted in almost daily canings, failures of any kind were not tolerated. However, it had the desired effect because all except one in my class passed the eleven plus to enter grammar schools.

In February 1947, there was a great blizzard resulting in snow to a depth of four to five feet, being above the lower window sills of the houses. I helped the men dig a trench in the snow along the centre of Pen-y-Dre to enable us to reach the village, where by some miracle, milk had arrived from the farms and was being distributed. We had to go to the bakery in Whitchurch for bread. I am not sure how long this lasted but life was difficult for some while.

Each one of us made a toboggan which we used to speed down the steep slopes on the Wenallt near Rhiwbina Hill. We always went down head first and there was considerable competition to see who was fastest. We steered with our feet trailing behind and attempted to miss the railings or the brook at the bottom. I finished up in the brook twice, whilst Alan Barr from Pen-y-Dre hit the railings once, resulting, I think, in a trip to hospital.

About 1949 the film The Third Man came to the Monico cinema which was packed for about three weeks with long queues outside beforehand. Dick Barton was famous on the radio together with Tommy Handley in “ITMA”.

As the decade ended we moved to 20 Lon-y-Dail where I spent the next 21 eventful years before emigrating to Llanishen.

This article was first published in Rhiwbina Living in 2012