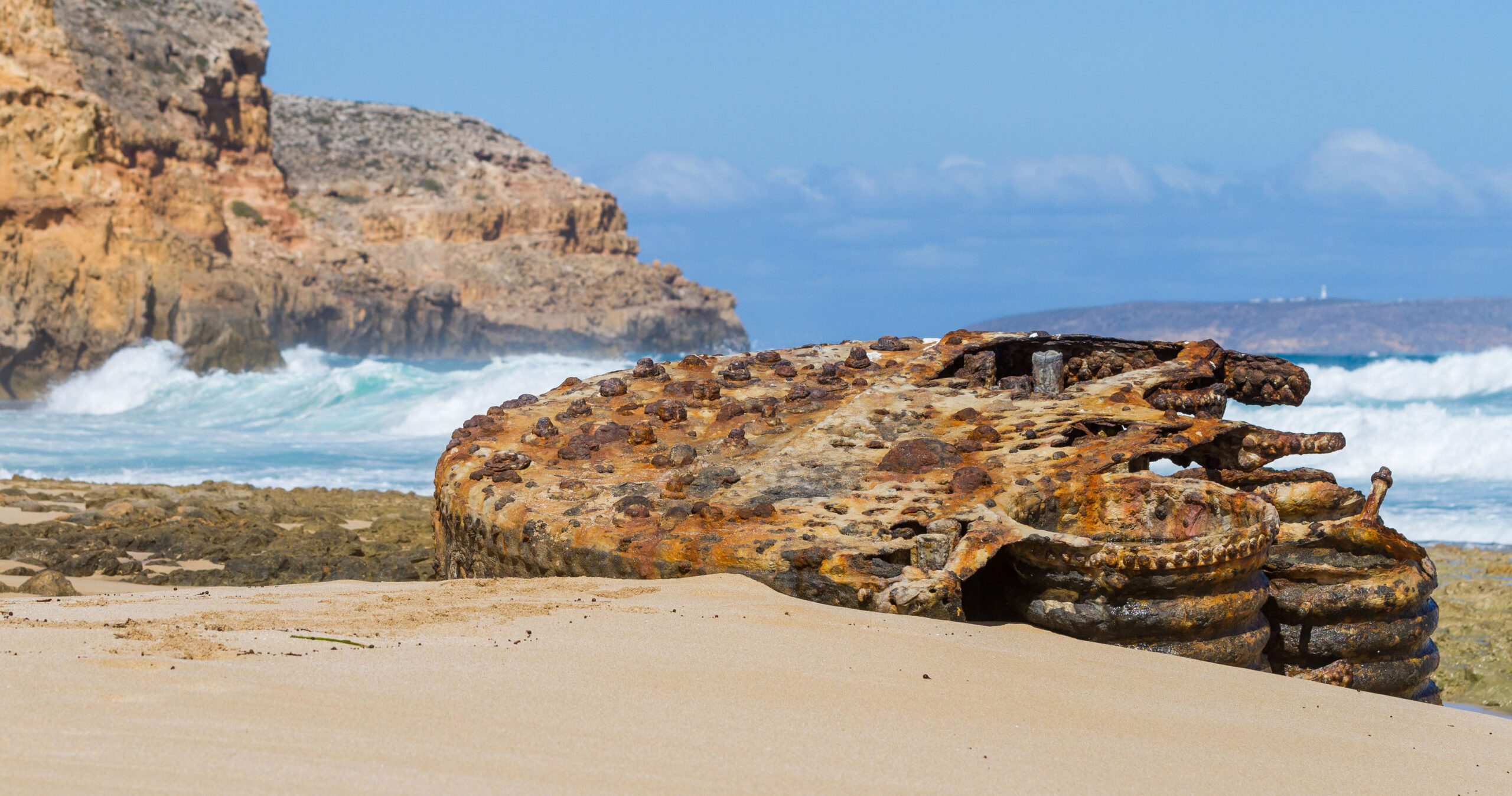 Deception, fraud – and hidden treasure in a north Cardiff wood. This is the story of the SS Ferret and its mysterious crew, a story that has gone down in infamy on both sides of the world

Lying silently in the sands of a South Australian beach lies the wreck of the iron screw steamship, the SS Ferret.

To the locals, it’s a well-known landmark, one that every so often reveals itself from its veil of shifting sands. Its rusty remains lie at the base of the northern end of the beach, and its silence keeps a baffling secret – a secret that’s never been explained for over 100 years.

The story begins on a cold autumnal day in 1880, when a small group of men approached the office of the Ferret’s owners in Greenock Dock, Scotland. The men were looking to charter the Ferret and to take it on a pleasure cruise in the Mediterranean. The ship had been fitted out as a passenger vessel and seemed perfect for the men’s plans.

The owners of the Ferret would have been pleased with their new clients – the group’s leader was a man that went by the name of Smith. He boasted of great financial credentials, and told the ship’s owners that the cruise was for his wife, who was unwell. He also alluded to the fact that he was a relative of the late First Lord of the Admiralty. What the owners didn’t know was that Smith was nothing of the sort. In fact, his name was Henderson, and he was about to lead the ship and its crew on one of maritime’s greatest mysteries.

A six-month lease was agreed, and bills for the first month’s charter was paid with notes that were later found to be worthless. Henderson had been operating a fraudulent London shipbroking office named Henderson & Co. to support the scam.

Provisions were also loaded onto the ship – ‘stores, plates and coal’ worth £1,400 were loaded, as well as £500 worth of premium wine. These were paid with bills that would later be found to be also worthless.

The Ferret finally set sail. The pilot that took the ship out to sea, reported that the ship was full of cheer and jollity, which raised the suspicions of the ship’s owners. It was a steamer of considerable speed, and after leaving Greenock, it sailed to Cardiff.

In Cardiff around this time, was a mysterious man, believed to be Spanish, who was staying at the Cardiff Arms Hotel. In the following days, he became acquainted with the captain of the Ferret, and when she left purportedly for Marseilles, he sailed with her as supercargo, a representative of the ship’s owner on board the merchant ship, and responsible for overseeing the cargo and its sale.

Henderson’s wife also boarded at Cardiff before the Ferret sailed through Straits of Gibraltar, looking for all the world like it was heading for its Mediterranean cruise. That night, the crew made sure that their ‘All Well’ lights were seen by the shore stations.

But that’s when the story took an unusual twist.

At some point during the small hours, the lights were put out, and under the cover of darkness, the ship silently passed back through the Straits. The aim was to give the appearance that the ship had foundered with all hands lost somewhere in the Mediterranean Sea.

The ship headed out into the Atlantic, where Henderson revealed to his crew that he was a colonel in the United States Cavalry. He told them that he needed to destroy all traces of his identity. He went on to tell them that he owned the ship and was entitled to do with it as he pleased.

He made it clear that he was incredibly wealthy, and that anyone who did not cooperate with the plan would be shot on the spot.

He gave direct instruction for the ship’s appearance to be radically overhauled. The wheelhouse and chartroom were dismantled and rebuilt on the aft-deck; the black funnel was changed to yellow; the ship’s lifeboats were changed from blue to white; and crucially, the ship was renamed Bantam, taking the name of another ship of similar tonnage on the Lloyd’s Register. Shipping documentation was forged to support the false name.

Any identifying objects on the ship were either thrown overboard or used as fuel in the ship’s coal-fired engines.

The crew were instructed to say that the ship had sailed from Singapore if questioned by authorities. The ship next sailed to the Cape Verde Islands and then to Santos, Brazil, where it arrived on Boxing Day 1880.

The crew took on a consignment cargo of coffee destined for Marseilles. Henderson then sailed for Cape Town, where Watkins disembarked, changing the ship’s name for the second time en route, this time to the name India. On arrival at Cape Town, he sold the coffee for £13,000. He then sailed for Port Phillip in Victoria, Australia via Mauritius and Albany, Western Australia arriving at Victoria in April 1881. Henderson told Australian port authorities that he had come from Bermuda.

By chance, an observant wharf policeman on duty at Queenscliff, Constable James Davidson, who had recently arrived from Scotland, was at his post as the newly-named India steamed past him.

At the time, he happened to be reading a copy of The Scotsman newspaper which included an article taken from the Glasgow Evening Citizen and which described the mysterious disappearance of the Ferret from the Clyde.

Seeing that the India fitted the description well, Davidson decided to take a closer look. He noticed certain unusual behaviours coming from the ship, and noted that it had broken a number of port regulations.

His suspicions raised, he kept it under observation and alerted his superiors. Customs officials seized the ship, and the faint appearance of another vessel’s name under the lettering ‘India’ soon confirmed the hoax.

Henderson and his accomplices tried to escape but were soon apprehended, charged, and brought to trial by jury in Melbourne before Justice Williams. Henderson, and his two main cronies were each charged with conspiracy on the high seas, attempt to defraud the ship’s owners, and customs and other maritime offences, including changing the name and official number of a ship. Chief Engineer Griffin, who had been recruited in Glasgow, provided much of the evidence that convicted the three.

Watkins, the Sailing Master, had left the ship in Cape Town after which a sailor called Wright had taken over the sailing duties. The three defendants fabricated a story that Watkins had led a Peruvian arms smuggling racket, and that he told them to attempt to sell the ship. The court rejected the story and found the three men guilty.

But that’s not where the story ends. A long time later, a letter landed on the desk of Cardiff’s Head Constable. The letter, apparently written by a prisoner in Spain, requested the help to find treasure ‘of considerable amount’ that had been buried in Cardiff. The Head Constable dismissed the letter as a hoax. The letter was also shown to a borough magistrate, who came to a different conclusion.

Correspondence with the prisoners was initiated, and before long, the prisoner admitted that he was at one time the private secretary of a Spanish nobleman who entrusted him with property to a considerable amount to be conveyed to England. He came to London with it, but from the start, he evidently intended to appropriate the property to his own use. He left London, went to Bristol, and stayed for some time at a hotel there. He then came to Cardiff and stayed for a still longer period at the Cardiff Arms Hotel.

During his stay there, his friends in Madrid informed him that his employer had discovered his duplicity, and agents were sent to England to arrest him. Fearing capture, he deposited the valuable treasure that he had been entrusted with in a secret place, not far from Cardiff, and then left in a steamer bound for Marseilles, but was landed on the coast of Spain. He was discovered by the agents of the nobleman, arrested, and tried at

Madrid for feloniously disposing of property entrusted to him by his master, and sentenced to a long term of imprisonment in one of the carceras in Madrid.

It was noted during the months that followed, that three men were spotted digging in various parts of a wood in the north of Cardiff. The men could not speak English well and were said to be of Spanish extraction. It is believed nothing was found at that time.

As for the Ferret, in 1904, it was called into action to assist with a stricken Norwegian barque that went under the name of Ethel. The Ethel had run onto a South Australian beach and the Ferret was the first ship on hand to rescue its crew and passengers. The beach was later named Ethel Beach.

As fate would have it, the Ferret itself was wrecked too in November 1920 after running onto a beach during a storm. All 21 crew were rescued after walking 3 miles overland from where the ship had foundered – on Ethel Beach.

The treasure, if it exists, has never been found.