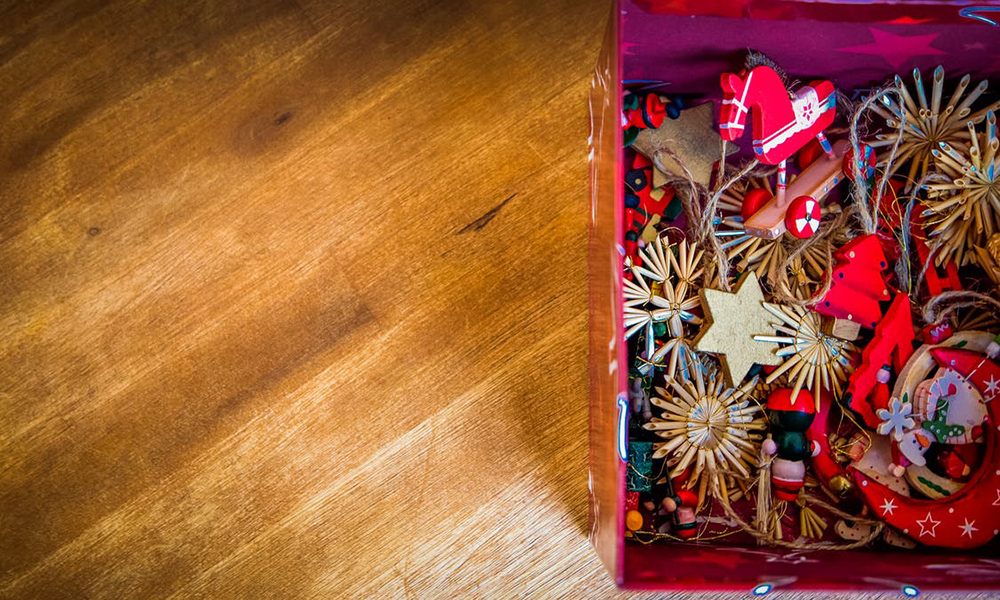 A short Christmas story for children by Geraldine Seymour

It was a week before Christmas, and everything was ready.

All the cards had been sent, all the presents had been packed, the Christmas cake and pudding had been made and Megan Rose, aged four-and-a-half from Rhiwbina was helping her mother put the finishing touches to the tree.

It was such a beautiful tree – tall and thick with dark green foliage.

“There,” said Mum, looking a little bit flushed in the face. “It’s all finished, just the fairy to put on the top. Megan, can you please pass her to me?”

Megan searched in the white cardboard box for the Christmas Fairy – but the box was empty!

“Well,” said Mum, untangling a piece of tinsel from her hair, “Wherever can she be? I distinctly remember wrapping her up in tissue paper and putting her carefully in the box last year. Ask Dad if he’s seen her.”

But Dad hadn’t. And so instead of the fairy, a robin was perched high on top of the tree. It wasn’t quite right really – in fact, it looked quite odd.

“No. She’ll probably turn up when we’ve stopped looking,” Mum replied from the kitchen, where she was busy making yet more mince pies. Dad kept eating the ones she’d already made. “The robin will do for now.”

But the Christmas Fairy was never found. After all the decorations were put up and the boxes and bags returned to the attic, there was still no sign of her.

Then, a few days later, Megan noticed that a number of items had disappeared from her doll’s house.

At first, it was just a few small things. Then one morning, when she got up, the doll’s bed had gone. The next night, an armchair vanished – and when she looked very closely, she discovered a set of tiny footprints in the dust.

It was three days to Christmas and Megan was so excited that she couldn’t sleep. She’d written her letter to Father Christmas and sent it via the Post Office to Lapland. She’d been such a good girl for the last few weeks that her Mum had started worrying about her. But this was not unusual as Megan’s mum worried about everyone and everything.

So Megan decided that she didn’t want to worry her mum about the disappearing doll’s furniture, especially as she was so busy with all the Christmas preparations.

That night, as soon as her mum and dad had gone to bed, Megan put on her dressing gown and slippers, tucked Rabbit firmly under one arm and crept stealthily downstairs to keep a watch over her doll’s house.

The house was very dark and quiet and Megan began to feel a little bit frightened but she was a very brave little girl. She had Rabbit to protect her, so she very soon forgot about being scared.

She pulled the curtains open, just enough to allow a bright moonbeam to lighten the living room. Then she snuggled up with Rabbit on the sofa, keeping a sharp eye on the doll’s house.

But soon she began to get very sleepy. No matter how hard she tried to keep awake, very soon, she was fast asleep.

She woke up with a start, to a loud clinking sound. She sat up quickly clutching Rabbit tightly to her chest. The light shining through the gap in the curtains was now morning sunshine.

Megan soon realised that the sound that had woken her was the clinking of bottles, as the milkman delivered them to the front door.

Rubbing the sleep from her eyes, she climbed off the sofa and opened the doll’s house front. There to her dismay, she saw that a second little chair had disappeared and that left in the dust was another trail of tiny footprints.

The second night, Megan again crept downstairs and again fell fast asleep. When she awoke, she discovered that a little table had been taken.

The third night, Megan was determined not to fall asleep and took some milk and biscuits for her and Rabbit to eat. But, after an hour, her eyelids began to get very heavy and she was just about to fall asleep again, when she suddenly heard a tiny tinkling sound coming from the pine dresser.

Tip-toeing across the room as quietly as she could, she stopped in front of the dresser and knelt down. Very, very gently, she opened the cupboard door and to her amazement, when she looked inside, she saw the Christmas Fairy moving small pieces of Megan’s doll’s house furniture about.

The fairy was so engrossed in her work that she didn’t notice Megan at first. But when she did, she nearly jumped out of her little skin and started screaming and screaming in a tiny, tiny, tinkling voice.

“Don’t be frightened,” Megan whispered as quietly as she could.

“It’s only me and Rabbit, we won’t hurt you. What are you doing in here? We’ve been looking everywhere for you – won’t you come out?”

The fairy ran to the back of the cupboard and tried to hide behind a doll’s armchair, but it wasn’t big enough and her wings stuck out on both sides.

“I can still see you,” Megan said gently. “Please come out.”

And with that, the fairy stamped her little feet so hard, that she lost her balance, fell backwards and got her dress all tangled up in her wings.

“Now look what’s happened!” she shouted crossly. “Look what you’ve made me do – I’ll never get them straight again!”

With that, she threw herself onto the little doll’s bed and began sobbing uncontrollably. She cried and cried, so much so, that soon there was a large pool of tears on the floor.

After a few minutes, the fairy suddenly sat bolt upright in the bed.

She jumped down from the bed and into the pool of tears and began frantically diving into the water – bobbing up and down in an attempt to rescue her wand.

After three attempts, she surfaced triumphantly, holding a very bedraggled, limp wand above her head.

“It won’t work now!” she screamed at Megan. “They can’t work when they’re damp – I’ll never be able to give children magic wishes ever again!”

“And it’s bent as well,” the little fairy snapped, and gathering the soaking skirt of her dress around her, she crouched down and sulked in the corner of the dresser cupboard.

“Look,” said Megan, in her gentlest voice. “Maybe I can help. Sit there quietly and try to calm yourself. Things are never as bad as they first seem. I’ll be back in a minute.”

The Fairy glared crossly at her.

“I never realised that fairies could be so bad tempered,” Megan thought as she went upstairs.

Five minutes later, she returned with Mum’s hairdryer firmly clutched in one hand.

The Fairy was just as she’d left her, looking very bedraggled and sad.

As carefully as she could, Megan picked her up with one hand and placed her on the table. And while the fairy continued to grumble and complain, Megan set the hairdryer at the lowest heat and speed and very, very carefully, dried the fairy, wings, wand and all.

After a few minutes, the wings and wand were still a little bent and her dress very crumpled, but all in all, Megan was pleased with the results.

“I’m not going back in that box!” the Fairy said defiantly as she smoothed the creases from her dress. “Or up that tree again!”

“I know,” Megan patiently replied. “I have an idea. How would you like to come and live in my doll’s house? It’s very comfortable and has a fully fitted kitchen with appliances and a lovely bathroom. It even has a spa bath.”

The Christmas Fairy was quiet for the very first time. Megan saw her deep in thought. Then suddenly, a small smile began to quiver on the Fairy’s lips. It hovered there for a few seconds before bursting into a full beaming grin.

Very soon, the room was full of tinkling laughter and as if by magic, the sparkle suddenly returned to her wand.

“Give it time!” Megan said.

N.B. In case you’re wondering about the Christmas tree – the robin loved it up there and when visitors saw him, they said “What a good idea!” And very soon all the houses in Rhiwbina had robins on the top of their Christmas trees.