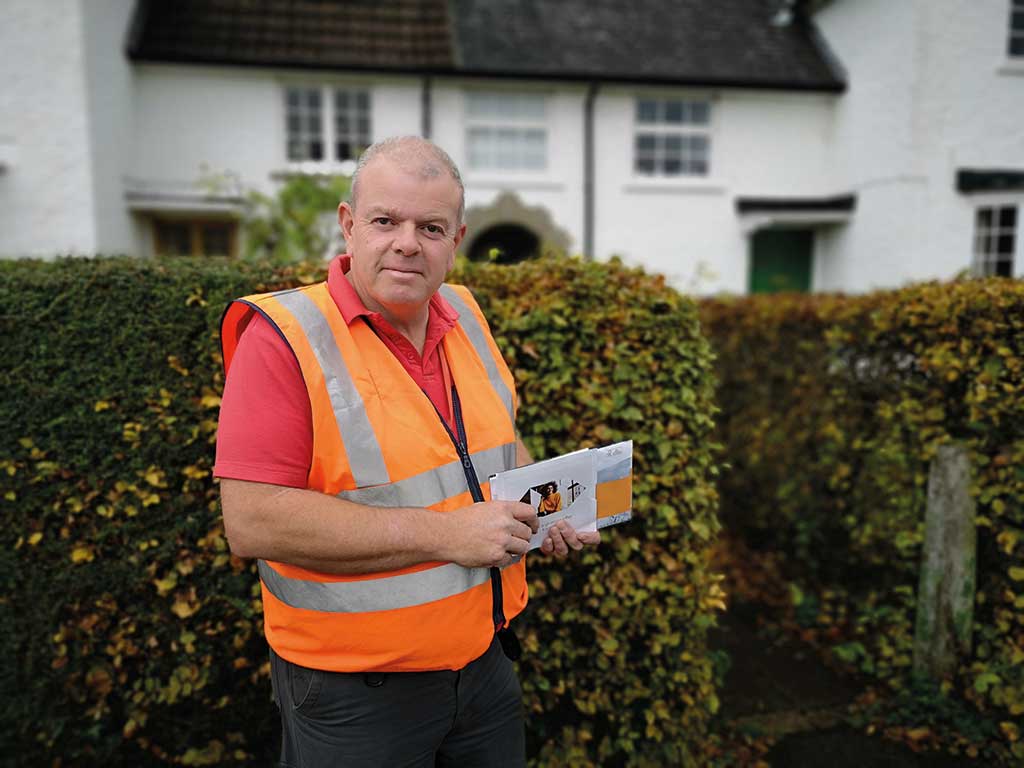 He walks 14 miles a day, six days a week around Rhiwbina. His face is known to many but his name is Philip and he’s been a postman in Rhiwbina for the last 30 years

“It was late 1984 when I joined the Post Office. My father had been a postman for 35 years and I was working as a motorcycle mechanic at the time. My father came home one day and told me about the job.”

Philip Eide takes a sip of his coffee. He’s taking a well-earned break from his current round in Rhiwbina.

“I started my career in Penarth Road. My first rounds were all over Cardiff – Llanrumney, the Docks, Canton. I was born and bred in Birchgrove and I was living at home with my parents when a vacancy came up in the North Cardiff office. The area happened to be Rhiwbina and I got the position and I’ve been here ever since.”

With his new job in the bag, Phil got married and settled down in Birchgrove.

“It was very handy for work. We had two kids – it was 13 years after getting married that we had our first one! I’m still very proud of them – they are now 10 and 13 years old respectively.”

Philip started his Rhiwbina rounds in 1989, first appearing up on Heol Lewis and Heol Briwnant. 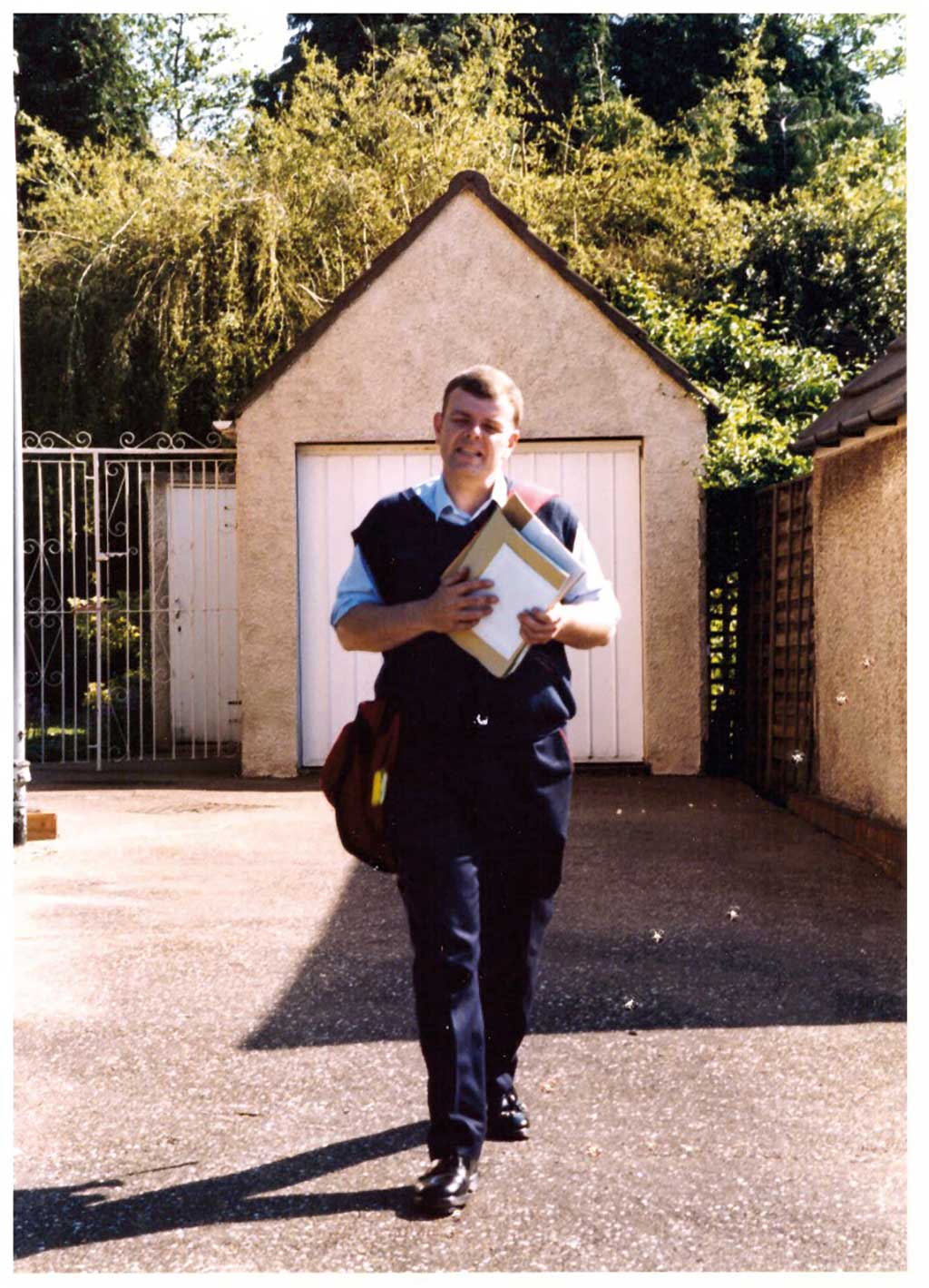 Phil working at the top of Rhiwbina

“I did that for 20 years. I’ve been doing my current rounds down in the lower areas of the village now for 10 years.”

And it’s not an easy job. A typical day starts early for Philip.

“I get up at 5am every day and my shift starts at 6am. I don’t mind it as the traffic is always pretty light at that time of morning.

“I head into the Llanishen office where there’s mail prepared there for us, sometimes from the night shift. We then have to prepare our rounds. It takes about 3 and a half hours to prepare the round, indoors, sorting out all the letters and the parcels. When the last mail wagon is in – the office has to be cleared before they let us out. Then we put them all in our bags, tie them up, put them in our vans and off we go.

“I start my round about 9.30/10am and it usually takes me about 5 hours. I end up finishing my day around 3pm and I work six days a week.

“Because we work such long hours, we have a week off every month. We have annual leave on top of that so it works out about 13 weeks a year off. We’re out for a long time though, and in all weathers and I think I’m getting a bit too old for all this now.”

Walking around Rhiwbina has pros and cons:

“All the exercise and fresh air does do me good, not that I seem to lose any weight! But it’s the slippery conditions that worry me the most. When it’s icy, you’ve got a job to do and you need to pick your way around carefully. Obviously it takes longer when it is slippery and the round’s long enough as it is without having to take your time about it.”

But there are positives to the job and Phil is quick to point out what he loves. 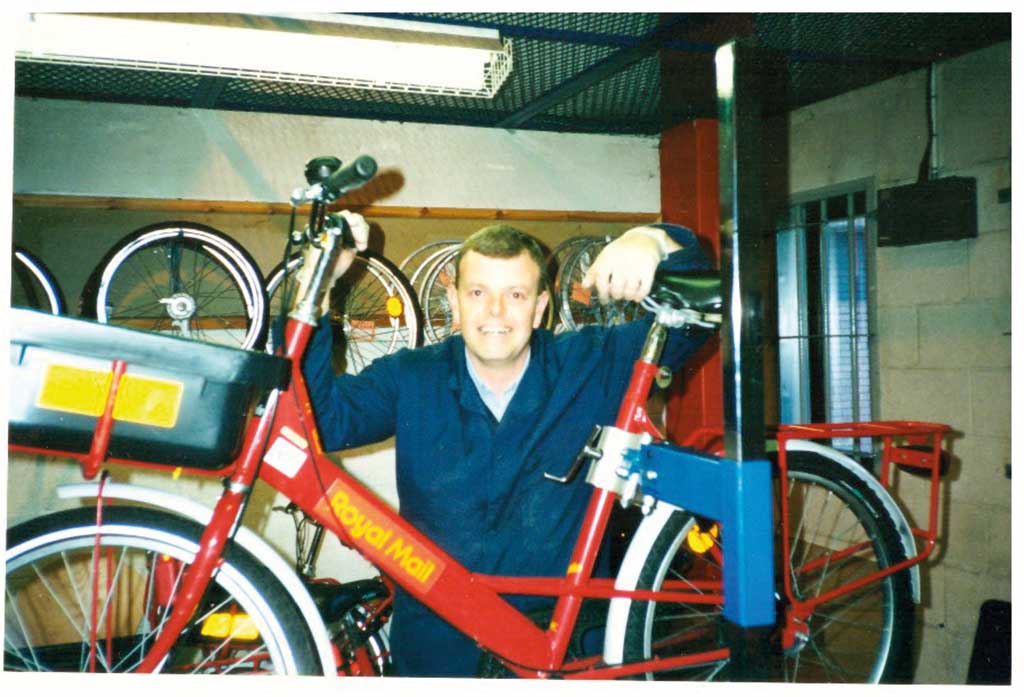 “It’s the people that makes me love my job. I love stopping and talking to people although I don’t have the time that I used to. These days, I have to have a quick chat and move on. Most people are great. It’s a nice area too so you can’t go wrong.

Rhiwbina is great. It’s an area I absolutely adore and I love everything about it. The only problem is that affluent areas tend to get more post so post workers’ workloads are a lot heavier in a nicer area! I see a lot of Investor’s Chronicle and the Financial Times!”

Among the many streets he delivers to, Phil has his favourite areas:

“I love coming into Y Groes because everyone there is really smashing. I remember sitting in my van there earlier this year, before we had that long spell of hot weather. And I remember thinking about how neat the grass had been cut. Everyone’s bushes are nicely trimmed and it’s nice to see. The people who live around here really look after where they live. 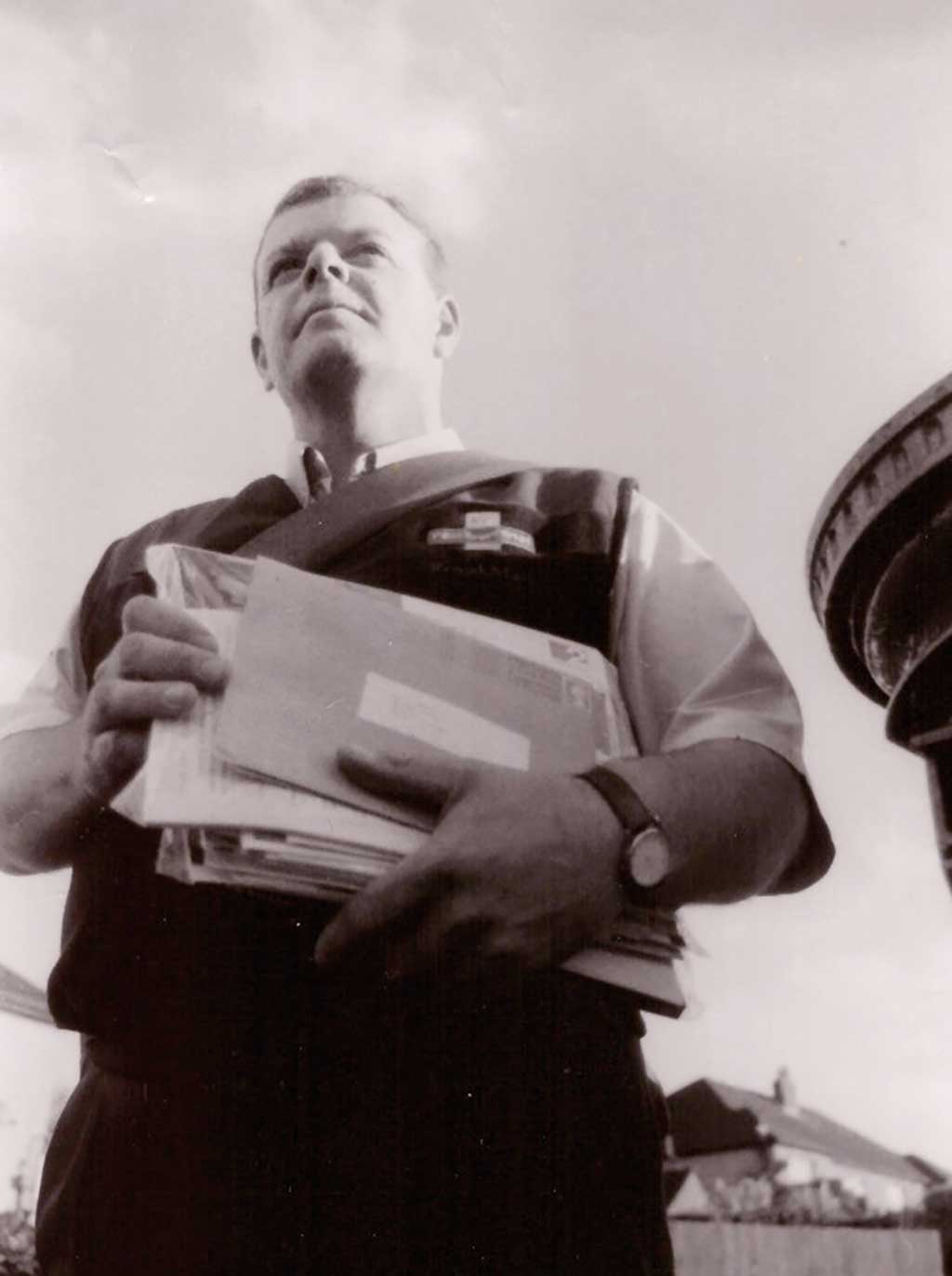 Phil comes across all sorts on his rounds:

“Around the village, there are all sorts of letterboxes – some are vertical and some are right down low – I’m not a fan of those ones!

I’ve had dog bites. I’ve been bitten five times and had to go to hospital on two occasions. That’s in 34 years though so I guess that’s not too bad. People these days tend to keep them under control a lot more. There’s one dog on my round who really doesn’t like me but when I knock on their door, I can hear the owners putting the dog away in a room.

“The more challenging aspects of the job include the weather and trying to get your round done on time. The Post Office aren’t on your back if you don’t get it done within 5 hours – you can end up taking 6 or 7 hours. There’s no one at the Post Office hassling you to get it done quicker. But saying that, you don’t want to be out all day. Finishing on time on a heavy day can be a challenge.

“If you go back to the office too early, which I know a few other guys do, you end up being sent back out to do other rounds. I have my 10 minute break in the van and we have a 30 minutes break in the morning when we’re sorting. I don’t eat anything on my round either. I just keep going and it’s always been that way.”

The physical demands of the job cannot be underestimated. Phil once tried an experiment to answer a question that had been bugging him for years:

“I walk 14 miles a day. When I lived in Birchgrove, I was doing a 4 and a half hour round and I often wondered where I’d end up. So one day, I started out from Birchgrove and walked as far in a straight line as I could. I ended up in Barry town centre.”

Visiting people in their homes has also meant that Phil has seen a few sights in his time.

“I’ve seen a few naked people on my rounds. I had a guy once up in Heol Lewis and he was in his dressing gown. He had to sign for his parcel and as he was signing for it, his dressing came open. And he was stood there with everything showing and he just kept on signing. It was a recorded delivery I think.

“I’ve seen a few naked people through glass doors too,” he laughs. “I’ve knocked on their doors and they’ve been in some kind of embarrassing state so they run off somewhere behind the door to get a dressing gown. I’ve never been lucky enough to have been invited in though! I would say that most of my days are uneventful although I did find a packet of Custard Creams in a postbox once. I’ve no idea why anyone would put them in there.” 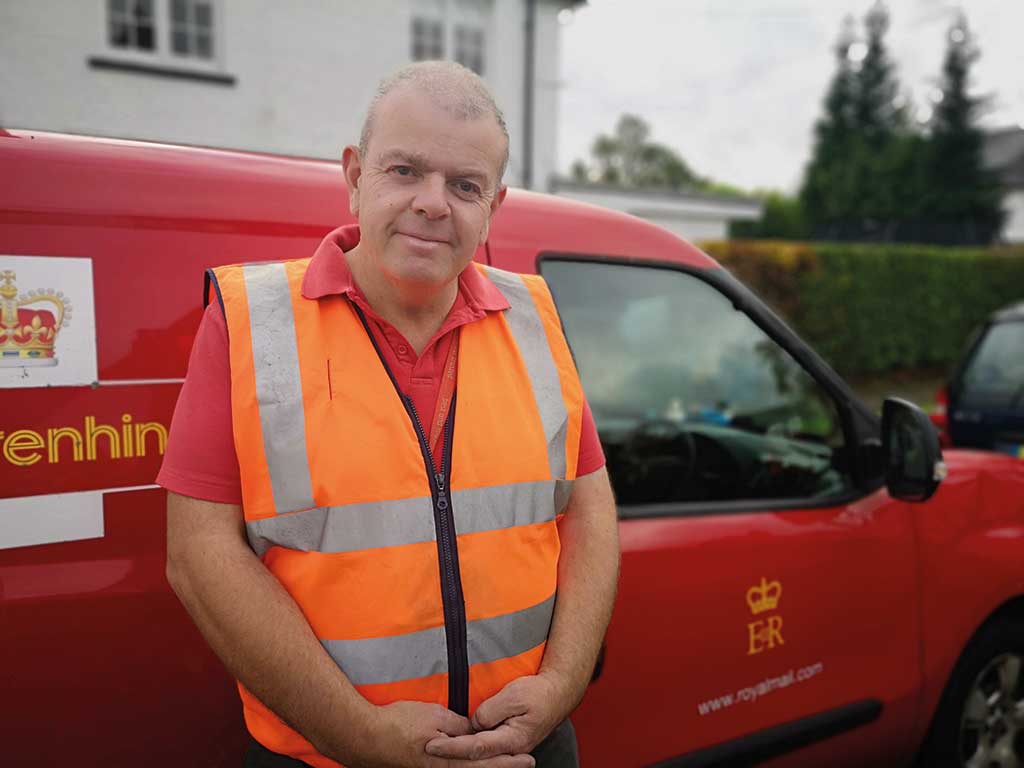 Phil starts work at 6am

Phil doesn’t see himself stopping any time in the near future:

“I’ll carry on doing what I’m doing until I retire or as long as my legs will keep walking. I’m finding it quite tough to be honest with you as I’ve been doing it for so long. I’ve got a few aches and pains and this five hour delivery span is quite tough.

“I used to use a bike. I’d pick it up and cycle out of the office to Rhiwbina with a load of mail on the front. In 2013, they gave me a van as the rounds got bigger and they got rid of the bikes.

“As for Rhiwbina, I hope it stays as it is. There’s a great community and atmosphere here and there’s always something going on in and around the village.”

And away from his postal duties, Phil doesn’t have too much time for anything else.

“I’ve got two dogs that I like to spend my time with. I’ve always loved dogs. I used to love motorcycling too – something I need to get back into. Back in the day, I also used to collect WWII military uniforms. With the long rounds, I often get home now and just flop in front of the telly! I have my children a few days a week after school and on the weekends and that fills up a lot of my spare time.”

Phil knows the streets and letterboxes of Rhiwbina like the back of his hand. Years of experience has taught him both knowledge, and a few little tricks to make his job a little bit easier:

“Travelling light is the secret. I tend to work in circles and semi-circles, as opposed to just doing streets. It means I can arrive back at my van empty-handed and get ready to go again.”

So when your Christmas cards and parcels arrive this year, spare a thought for the man who ensures that it gets to you safely and promptly.