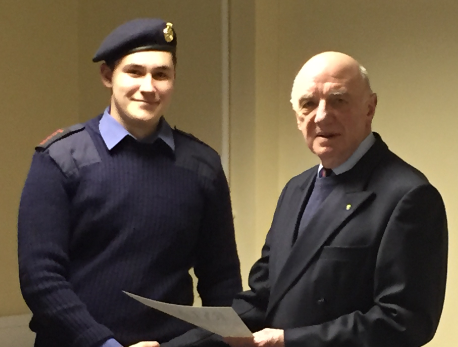 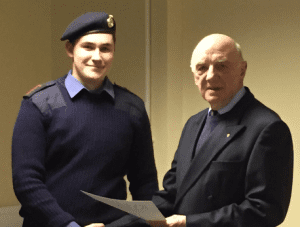 John Roberts from the Sea Cadet Corps Unit 68 based in Cardiff was presented with his certificate on Thursday 26 March for successfully completing the annual Rotary Youth Leadership Awards (RYLA) programme in the Brecon Beacons during the Summer of 2014.

John should have received this award at a ceremony in October of 2014 but sadly he was unable to attend at that time.

The 2014 RYLA programme ran 4 Youth Leadership courses that each lasted 6 days and were held in late July and early August at Dolygaer in the Brecon Beacons. The training there was supervised by a team of external pursuit instructors employed by Merthyr Tydfil Council and each course trained up to 25 students in the 16-18 years age range bracket. All of the Rotary Clubs in South Wales are able to bid in an open Rotary Club market for their places on these RYLA Courses.

During these courses all of the students engaged in a wide range of field activity ranging from Abseiling, Caving, Gorge Walking, Kayaking, and General Navigation. However, in all of this work the emphasis was placed upon the development of leadership skills with each student being given the opportunity to lead their team in one of the activities. There were also discussion groups in which the students are encouraged to develop their mental dexterity and the process of lateral thinking. In all of this activity the students had great fun and developed close friendships with the others who they met on the course.

The Rotary Club of Cardiff – City of Llandaff (RCC-CL) has supported this RYLA programme for several years. In order to start the selection process the Club invited student applications from 7 local schools plus the Sea Cadet and 2 x Air Cadet Units in Cardiff. The outcome of this was that for the 2014 courses 10 x suitable volunteers were invited to be interviewed by 2 x Club members. These interviews were structured in such a way that identified those candidates who might benefit most from the RYLA training rather than just “cherry-picking” the most capable ones. These interviews selected 6 x female and 4 x male candidates as all being suitable for the programme and one of the interviewing team members – a former Head Master and Regional Education Executive – commented that the quality of these applicants was exemplary.

The funding of about £305 per place on the RYLA courses was assured by contributions from a major local Charity, Cardiff Round Table, the Rotary Club of Machen, one private sponsor and RCC-CL itself. Sadly one of the selected students fractured her foot and so could not take part but the remaining group of 9 students were able to attend one of the 4 courses and were all successful in earning their RYLA Certificates.

John Roberts was unable to attend this last phase of the RYLA programme which was a celebratory dinner held at the Churchills Hotel on 14 October at which the Principal Guest was John Dawes OBE – the former captain of the British and Irish Lions side for their tour of New Zealand. At this function each student had to give a short review of their time at Dolygaer before receiving their RYLA certificate. However, this situation was remedied by a separate presentation for him at the Ty Llewellyn Sea Cadet base in Cardiff on 26 March at which John gave his own briefing and received his RYLA certificate.