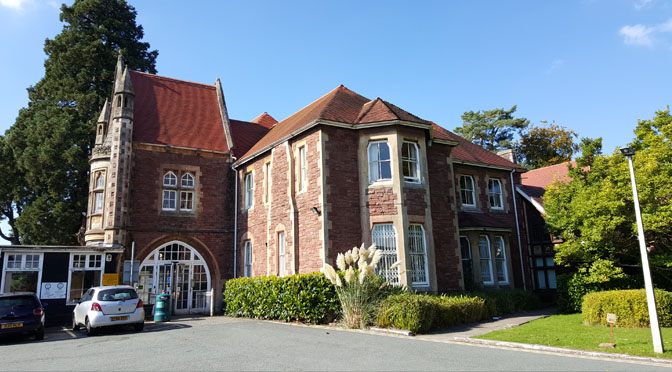 Rookwood Hospital looks set to close in the near future. The hospital has been taking care of patients for generations. This is the history of the local landmark.

Rookwood Hospital was built Sir Edward Stock Hill in 1866. Sir Edward was a Conservative Party politician who served as Member of Parliament for Bristol South from 1886 to 1900.

He was made a Knight Commander of the Order of the Bath (KCB) on 10 May 1892. He built Rookwood for his own private accommodation and both him and subsequently Lady Hill, lived there.

The son of the founder of Hill’s Dry Docks in Cardiff, Sir Edward died in 1902 and Lady Hill continued her occupation at Rookwood until 1917. She died two years later. Monograms of both Sir Edward and Lady Hill are visible on the gate pillars and in the house.

In early 1918, Rookwood was taken over for use as a hospital. The First World War had taken its toll on the men who had left to fight and Rookwood Hospital was turned into an auxiliary hospital. It became known as Rookwood Officer’s Hospital. It was one of several across Cardiff that included Radyr Red Cross Hospital, Samuel House, St Pierre’s and Old Mansion House.

At the end of the war, Sir Lawrence Phillips MP, approached the Statutory Committee who were then responsible for providing treatment for disabled ex-servicemen. His wish was to help the injured and disabled ex-servicemen who had returned from battle. As a result, he subsequently purchased Rookwood for £25,000 and presented it to the Ministry as a home for Welsh Paraplegic Pensioner cases. His instruction was that patients could stay there for as long as they needed to.

In 1932, an extension was added to the hospital, thus allowing it to become a general hospital.

Throughout World War II, Rookwood was used to care once again for injured personnel returning from the line of duty.

During the 1970s and 80s, Rookwood had eight wards caring for people with spinal injuries, brain injury, stroke, multiple sclerosis, and Parkinson’s disease.

In 2001 the Spinal Unit moved to Wards 4 and 5 with 31 beds for Spinal Injuries and 5 beds for Amputees.

The name ‘Rookwood’ was apparently given to the house during its course of construction by Lady Hill. Before her marriage, she was brought to see the building construction and was asked to find a suitable name for it. When she came on to the property, a number of rooks were flying overhead and she immediately thought of ‘Rookwood’, deciding that that should be the name. To this day, a large number of rooks can still be seen around the hospital, giving the story of its name some credibility.

The house itself stands in gardens of approximately 26 acres and built in the early 13th century English Gothic style. It was extended in 1881 by Mr J Pritchard, well known as the architect employed in the restoration of Llandaff Cathedral. The beautiful ‘Porte Cochere’ and the North Lodge were also designed by him, the latter being a very fine example of half timbered work. On the front of the Porte Cochere, there are three carved stone panels, each representing one of the late Sir Edward’s activities. One is a carving of a ship at sea, another of an eighteen pounder being fired by a gun team and the remaining one of the House of Commons. The house is built of Radyr stone with Bath stone facings and red tile roofing. 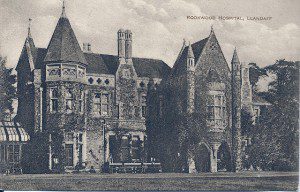 The internal decorations and painted ceilings were carried out under the direction of Mr J.O. Grace, the artist and designer of the Great Stair in the National Gallery. Most of this internal painting has never been touched since its completion, is still in perfect order and represents some of the finest work of its kind. The old Camellia House, now converted into the Medical Officer’s Quarters, was built entirely of teak with panels of mosaic. The summer house overlooking the lawns was brought from the outskirts of Cardiff and appears in an old view of the City dating back to the 13th century.

Sir Edward was a great lover of trees and these form a feature of the extensive grounds. These grounds are remarkable for wonderful specimens of Camellia, Rhododendron, Azalea and a most valuable collection of beautiful Japanese Maples. The timbered parkland contains remarkable specimens of Conifers, Wellingtonias, Cedars, Lime, Beech, Elm etc. It is said that there is one specimen of almost every known non-tropical tree to be found in the grounds. The larger trees are said to have been planted to commemorate family events and the two Wellingtonias on the main lawn mark the birth of Sir Edward and Lady Hill’s son.

The hospital is also famed for its own radio station, Rookwood Sound. The station first hit the airwaves on 31st October 1987 with founder member Julian Brinkworth in the hot seat.
Ken Bruce from BBC Radio 2, who is an ambassador of the Hospital Broadcasting Association was on hand to open the station.

It had been the result of three years of fundraising and obtaining permission from the hospital authorities. Over £30,000 was raised – anything from attending school fetes to company sponsorship was utilised to raise the money. The biggest fundraising effort ever undertaken by the station was to hire Concorde for the day.

In 2002, Rookwood began broadcasting programmes 24 hours a day. There was also the opening of a new studio called ‘The Julian Brinkworth Studio’. Until his death in July 2004, Julian remained vice president of the station and a valued member of the Rookwood Sound team.

2002 also saw the launch of their own website, which now offers news and information for listeners at home and in the hospitals. Another raft of technological improvements was made in 2006.
In June 2011, Rookwood Sound opened its new studio at Llandough Hospital, heralding a new chapter in the radio station’s history.

Whitchurch’s Huw Stephens, who is now a Radio One DJ, started his career at Rookwood Radio as a teenager.

“I didn’t get paid but I was doing what I loved.” he says.

“I was told not to play anything gloomy or depressing- they wanted their patients to be uplifted and kept happy.” Huw crafted his art for two years at Rookwood, before managing to land the position of Radio One DJ – at the age of just 17.

“It was the time in the nineties when Welsh talent was in big demand. The Stereophonics, the Manic Street Preachers and Catatonia were really leading the way for Wales. Bethan [co-presenter] and I beat off the competition and there I was – a Radio One DJ before I’d even left school. I even opened my A level results live on-air. Ironically enough, my grades were B, B and C!”