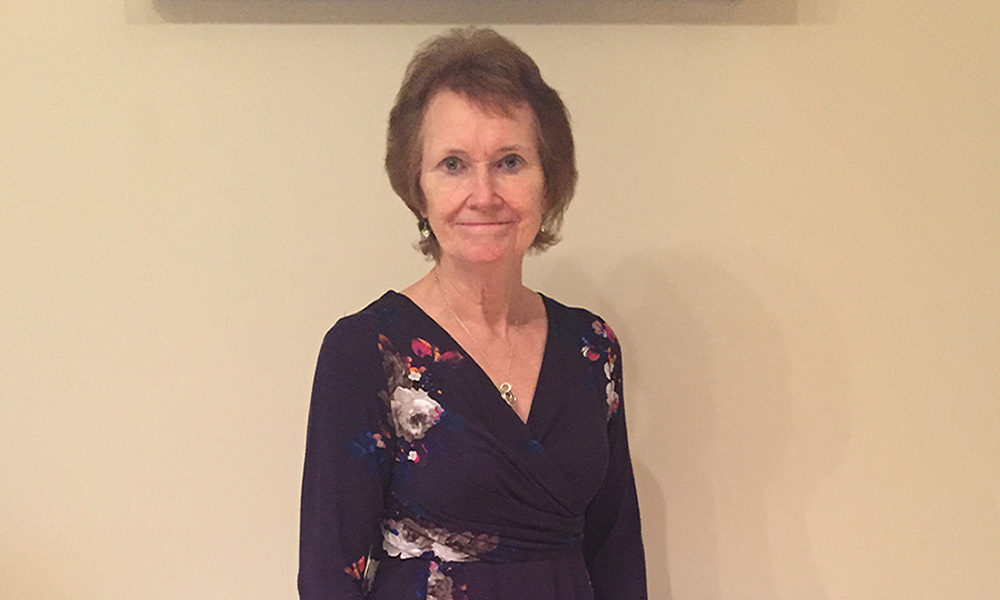 In a new series, we hear from local residents who have been recognised in the Queen’s Honours Lists over the years

I received a BEM (British Empire Medal) for my work as a volunteer within the Royal Voluntary service- what used to be known as the WRVS, but which now includes men and young lads, hence the change in name.

I have run the trolley at UHW for the past 30 years serving patients whilst they have been an inpatient. I was project manager for 18 years, but that wasn’t always the case as I was also working part time as a supply teacher at Eglwys Newydd Primary School.

I found out about the award last November but couldn’t say anything until 30th December. I did tell my husband but didn’t tell anyone else, as I was worried that my daughters might put it on Facebook! I was in bed on 30th December when the New Year’s Honours List was published by the Press and then my phone started beeping with all these messages coming through!

Jayne Cowan had picked up the list and shared it online and then it all went mad with people contacting me! We were in the Juboraj on New Year’s Eve and people were coming up to me and bowing and curtsying.

I went to work in UHW on 2nd January, which was my birthday, and everyone was coming up to me and saying ‘well deserved’. People didn’t expect me to be in but we still volunteer on Bank Holidays as patients still need serving. Everyone was bowing, from cleaners to consultants and it was lovely.

I first got inspired to help out at the hospital when I suffered from bacterial meningitis when I was eight months pregnant with my daughter. It was terrifying and I felt the staff saved both the baby and I, so I wanted to give something back. That’s what started it. So when my daughter was 8 years old and in school, I started working on the trolley.

One of my friends, Angela who I was in junior school with, nominated me for an Honours award years ago, so this letter from Camilla, Duchess of Cornwall, last December came out of the blue. I was really surprised and pleased, and couldn’t believe it really. If my friend hadn’t persevered and written letters I wouldn’t have got it. To be honest, I think that there should be a fairer system of people getting awards as it all depends if you are nominated – and so many people do such valuable work.

I think the service we provide at UHW is very important. A lot of patients don’t have relatives or visitors that are near and able to visit, for example some patients come from as far away as Pembrokeshire and have no relatives able to visit who can help out. We have been known to go and buy nighties and special magazines for patients who have no-one else to rely on, and go out of our way to help if we can.

My husband got quite emotional when I received notification of the award. My parents have passed away and it’s been lovely to hear people say that my parents would have been so proud. Everyone is really pleased and say it is ‘well deserved’ and ‘about time’. I’ve had lovely letters of congratulations from various politicians in the area and from friends. Many people have seen me in the hospital over the years. But you don’t do it for that, you do it because you enjoy it and you get a real thrill from helping people.

Volunteering is vastly underrated and lots of people won’t do anything for nothing. You do feel privileged that your hard work has been recognised, but there are a lot of people out there that could be similarly rewarded. Jayne Cowan recommended me the same week for the bouquet of the week, but I had had one three years before, so said I’d had enough media attention and so nominated another lady who had done the trolley with me for 17 years – and she was thrilled. ITV Wales wanted to come and film with the trolley in hospital, but I said no. It would have been disruptive for patients, and I’m not really that sort of person!

I was invited to have my award presented to me at a mansion house by the Lord Lieutenant of South Glamorgan. There was also an invite to the Queen’s Garden Party at Buckingham Palace in May. I took my husband.