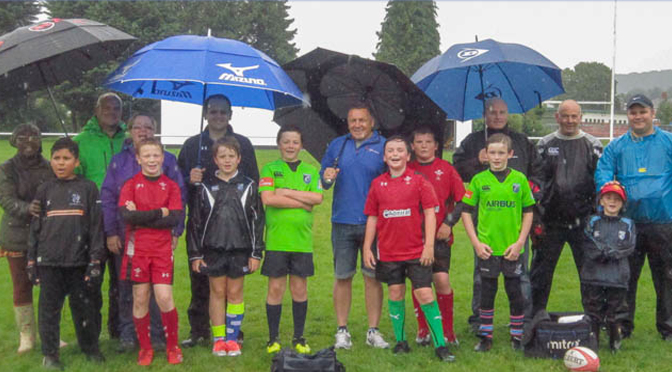 Rhiwbina RFC was very much in the news during the Rugby World Cup.

They featured in the Google #HometownHeroes Digital Countdown to the RWC and were featured with Sam Warburton’s No.7 shirt number with seven days to go to the big Kick Off! The Google ground view cameras visited Caedelyn where the team was photographed along with a 360 degree view of the first team pitch and changing rooms. To see the pictures just Google Rhiwbina RFC.

The club also appeared live on ITV Good Morning Britain, where a room-full of mini and junior players made it quite clear who they thought would win the Rugby World Cup!

The minis and juniors were also featured on ITV Wales News, with a focus on respect and fair play and positive behaviour in rugby.

Rhiwbina have put up ‘Respect Boards’ inside and outside their changing rooms, to ensure that players, coaches, parents and supporters behave respectfully at all times.

The Trade Centre Wales has also sponsored Rhiwbina’s Under 15s.

“This is one of the largest, younger teams that we have ever sponsored. During the process of organising the kit, and meeting up with the coaches to present the kit, it was clear to me that this is a great, locally run club.

“The hours and dedication that the coaches and committee put in to make sure the boys can play is second to none. We’re thrilled to have been given the opportunity, and wish Rhiwbina RFC the very best of luck for the season, and hope the good luck continues since wearing the Trade Centre Wales logo.”