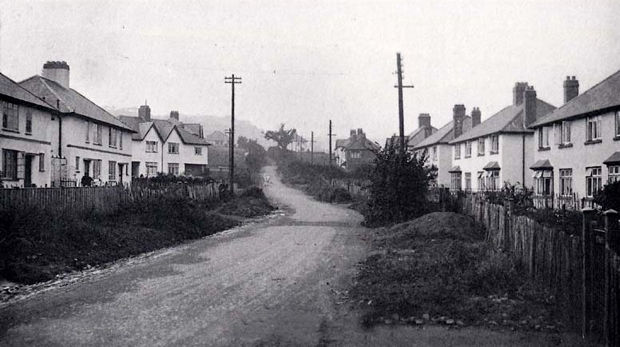 My father had joined the GPO (the old name for British Telecom) as in the prelude to World War 2, house building dried up and his plumbing and lead burning experience was instrumental in him getting a start.

Dad’s expertise with lead burning and jointing on telephone cables, and his methodical way of working soon managed to get him promotion to tradesman’s money. Despite this, the family budget was still quite stretched.

Very soon the rumblings of war pressed closer, and together with other technicians, Dad was travelling further afield installing special cable runs for defence purposes. By now, he had graduated to driving one of the large GPO lorries, which I thought was marvellous.

Because of the possibility of a bomb falling on the large GPO Garage in Western Avenue, an instruction was given for all drivers to take their lorries home at night, and park them where they could nearby to their homes. That garage was situated where the large Tesco supermarket now is.

When Dad used to finish work and bring the lorry home, I would be waiting patiently as he would let me sit on his lap as he drove up the road to where there used to be a pull-in just below the reservoir. He used to let me steer the lorry – although it was as much as I could do to turn the very large and heavy steering wheel. I can still remember the thrill that it used to give me. After locking up the lorry, I would walk down the road with Dad, feeling that I had earned a bit of Dad’s cooked meal that Mother would have ready – even though I had eaten my tea earlier.

I was rapidly growing up, and had started attending school at Rhiwbina Infants. Like most youngsters who were starting school, it had been a worrying experience for me. But I still recall the very kind teacher who looked after us in the ‘beginners class’ – Miss Harman. I supposed she had seen tears many times before, but her kindness and understanding must be remembered by many ex-Rhiwbina pupils, though she passed away many years ago.

I do also remember Miss Price, who used to be in charge of the second class, and who though kind, was a little bit stricter. She insisted on learning your tables, and would conduct the class with her cane as they sang “One two is two, two twos are four, three twos are five…” – well, I could never add up! In later years, ‘Miss Price’ (by then Mrs Everson) was Deputy Head of the Llanishen Fach Junior School that my daughters attended, and we had a few laughs about old times.

There were no indoor toilets then. They were situated on the far side of the playground, and were not much of an encouragement to ‘go’ when it was tipping down with rain. There were a few ‘accidents’ caused by waiting too long for the rain to stop.

I discovered girls about now and the idols of my affections was a girl called Shirley Thomas, who lived at the bottom of Wenallt Road. She was in my class at school, and although I did my best, I’m afraid my affections were not reciprocated. I recall an episode which quite innocent back then, may be regarded now as a little more serious were it to happen today.

We had been rehearsing a little play in school, where the best thing was dressing up for the various parts. When most of the children had gone home at the end of the afternoon, I overhead the teacher saying that Shirley had left her knickers behind (and obviously gone home with the pair she was dressing up with).

Straight away, innocent Alan as he was, said “Don’t worry Miss. I pass her house on my way home. I’ll deliver them to her!”

I still remember the look on Shirley’s mother when I knocked at their door, and said “Shirley left these in school today.”