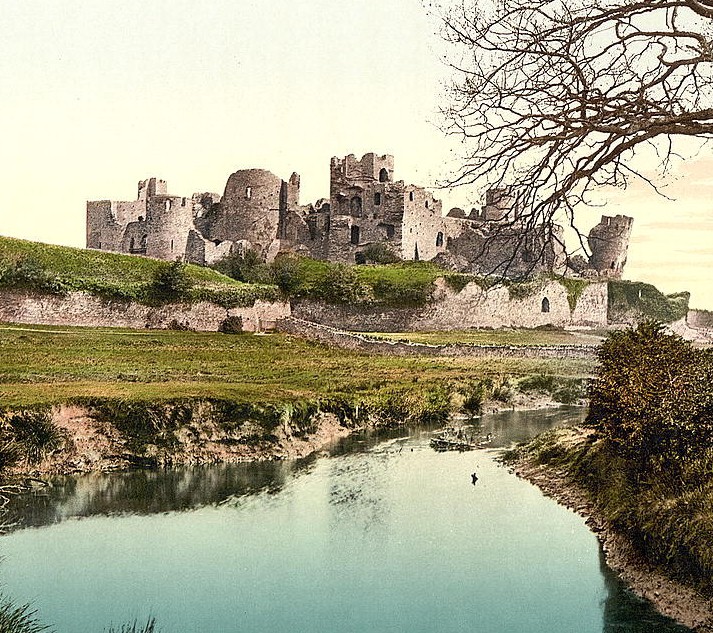 Caerphilly’s history goes back nearly 250,000 years when what we know as Neanderthals scoured the plains for food and shelter. Leaving little impression on the landscape, it wasn’t until the Ice Age glaciers retreated in 7,000BC, that what we know as modern humans began establishing settlements.

By 4,500BC, the settlers had cleared a lot of the forests that had existed in the area using stone axes. Within the next millennium, they had started producing pottery and had built trackways that linked them to other part of the valleys. Over 150 burial communal monuments from this time still exist in Wales, although none have been found in Caerphilly.

By 2,500BC, metal was being used for the first time in tooling. Bronze in particular was being utilised to create weapons, as the discovery of an axehead at Rudry confirms.

The forests continued to be cleared and farming spread to the uplands. Bronze Age burial tombs still pepper Caerphilly’s ridges today. They can be found at Cefn Gelligaer, Mynydd y Grug above Ynysddu, Twmbarlwm and on Mynydd Eglwysilan. They appear as small mounds of stone and earth.

By 1000BC, the peaceful settlements were beginning to experience unrest. Climate change forced settlements to protect their fertile lands. It is thought that the Silures controlled a lot of the area at this time. Over the following five hundred years, they built hillforts such as the one at Coed Craig Ruperra.

In 43BC, the Romans landed on British soil and within the next four years, had taken all of Britain east of the River Severn. Needing a boundary, they formed their western frontier here, and the Silures launched many raids against the Romans, angered at the Romans’ advancement.

By 57AD, the Romans had had enough and began silencing the Silures with invasion. It took 13 years to complete. The Romans then set about creating a network of road and forts across Wales. A fort was constructed at Gelligaer that would have housed a thousand soldiers. This can be seen today on the road between Cardiff and Y Gaer, near Brecon.

The Silures were integrated into Roman life, following in the footsteps of others that had successfully been conquered and integrated into the Roman way of living. This was commonly known as ‘Romanising’ and was a key aspect of Roman success.

But by the end of the fourth century, the Roman grip on Wales, and Britain, was loosening. Attacks by the Barbarians were causing difficulties and the Romans found themselves abandoning its territories and withdrawing troops back.

A great deal of uncertainty and turbulence filled the vacuum that had been left by the withdrawal of the Romans. Various factions struggled for power. In the latter half of the eighth century, the Anglo-Saxon King Offa ordered the construction of an earthern dyke that seemed to cut off ‘Wales’ from England.

By now, Morgannwg had evolved as an administrative area. The King of Morgannwg would often visit the various areas of the ‘cantrefi’ and be wined and dined by the local lords. It is probable that one of these locations was at Is Caiach.

By 1266, 20 years after the Battle of Hastings, all of England was under complete Norman rule. Norman lords were encouraged to push into Wales. One such lord, Robert fitz Hamo launched incursions from his base in Cardiff and took most of the lowlands. He was hesitant not to make any attempt on the higher grounds though, having come off second best once in a raid on Gelligaer in 1094.

Over a hundred years later, the Lordship of Glamorgan was in the hands of the DeClares. DeClare commissioned the building of Caerphilly Castle to counteract the threat by the Lordship of Senghenedd. A stand-off between Earl Gilbert deClare and Llewellyn ap Gruffydd, the Welsh Prince of Wales ensued. Ap Gruffydd’s patience finally ran out and he attacked Caerphilly Castle. DeClare’s army managed to fend off the attack and ap Gruffydd became increasingly under threat from the Anglo-Normans. He retreated to Brecon and never set foot in Caerphilly again.

By the end of the 12th century, the Welsh Church had gained influence and had set about creating dioceses. Caerphilly fell under the Diocese of Llandaff. There followed a substantial build of new churches, which continued well into the 14th century. St. Barrwgs Church in Bedwas is a good example of a church built at this time and retains a lot of its original build and features. The Cistercians, of Norman origin, lived a life of poverty and silence and in 1179, they built Llantarnam Abbey, four miles to the east of Caerphilly. Outlying farms provided sustenance for the monks. One such farm was located at Cefn Rhyswg.

Edward I was crowned King of England in 1272, and immediately set about flushing out the Welsh. Llewelyn ap Gruffydd and his brother, now forced back to North Wales rebelled, but paid the ultimate price. In 1294, after much simmering resentment, the Welsh attacked Caerphilly Castle and burnt the town.

Twenty years later, in 1314, Llewellyn Bren instigated a revolt. He gathered an army of ten thousand men who besieged Caerphilly Castle and left the town in ruins. A great battle took place at Cefn Onn, where Edward’s men joined the local Anglo-Norman lords in crushing the rebellion. Bren was captured and imprisoned in the Tower of London.

Caerphilly as a town began to flourish around the time of Owain Glyndwr in the 15th century. Over the following centuries, trades such as wool and iron developed. Abercarn was one of the locations of a furnace, and coal to fuel the furnaces was mined on Caerphilly Common and from Rudry Woods.

By the end of the 18th century, the coal industry had revolutionised the area. Canals and roads cut through the landscape, and with it came the population. Churches, shops and schools sprung up to cater for the new inhabitants of the area. Motorised transport and the introduction of electricity during the early 20th century brought about many of the changes that still exist today in Caerphilly.