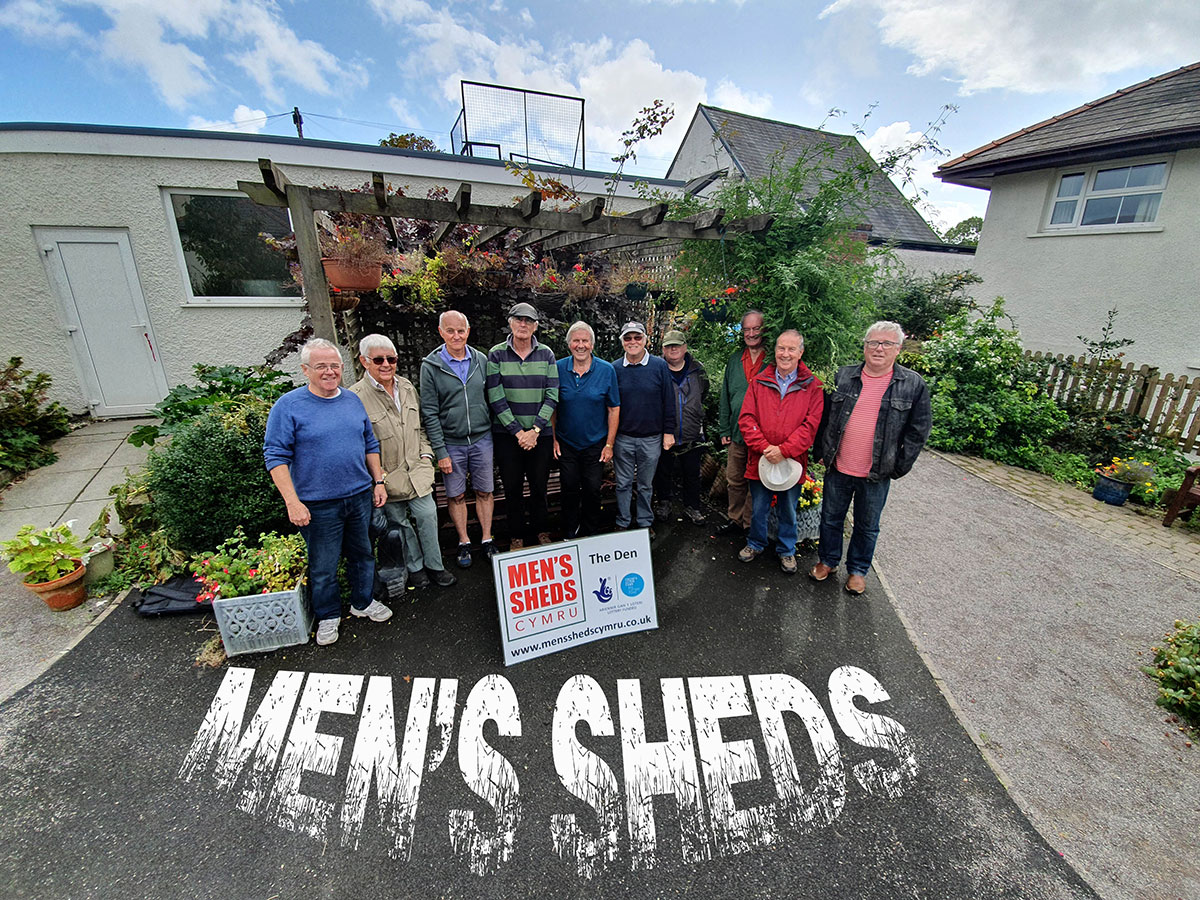 The Men’s Shed in Rhiwbina offers a place for a group of men to come together, chat, and create things for the community

There’s a problem down in the village.

There’s an uneasy sense of alarm among the men down at The Den. Iolo is stood there with an empty kettle, looking a little worried.

“A cuppa is very important in our little world,” says Mike.

Mike is the Chairman of Rhiwbina Men’s Shed. Not many people know it but they meet weekly at the small shed, also known as The Den, in Canolfon Beulah.

For generations, a shed has been a place for men to escape the stress and strain of life; a haven to gain much-needed sanity; to be surrounded by familiar items; and to make things. For the Shedders in Rhiwbina, this thinking has been expanded to more of a social thing. And the community of Rhiwbina is benefiting.

“We set up Men’s Shed Rhiwbina in 2016,” says Mike. “The movement itself actually started in Australia and has spread to countries all over the world, including Wales, where there are now 50 Sheds. Fellow Shedder Gareth and I are Rotarians and what we found was that there was a large number of men who had time on their hands, whether it was due to unemployment, retirement, bereavement or because they were wanting to involve themselves in the community more.

“We put some flyers in local supermarkets and put notices in the local WI newsletters – telling them that if they had any members who wanted to get their husbands out, to send them to The Den.”

The group has now grown from two or three members to 13.

“We’ve actually become a victim of our own success in that we’re having to turn people away. We’ve all got different skills. Gareth is very good at boiling a kettle,” laughs Mike.

And a varied bunch they are. Mike worked in the Patent Office. Then there’s Colin:

“You name it, I’ve done it. But mainly, I was a draughtsman. I designed ships.”

Graham was in the Civil Service but was also a mechanic for a long time.

“I had a moment in my life and it was a bit of a eureka moment,” says Graham. “Many years ago, I went to a training centre for six months. It was down where Tesco Extra is now. And it was while I was there that I realised that I had transferable skills, which meant that I could turn my hand to anything I wanted to. It set me up for life and I can bring that attitude to the Shed.”

Then there’s co-founder Gareth, the one who’s still working. specialising in social welfare.

“I was in IT and worked my way up to general dogsbody at Men’s Shed,” announces another Shedder, Carl. Sat next to Carl is Keith, who was a video editor at HTV for ten years.

“I don’t watch TV any more. I had enough of that when I was working,” he chuckles.

On another bench, Iolo talks about his career as a theatre technician. And Brian reminds the group that he is a former architect.

“Have pencil, will travel,” replies Brian. On the end is Phillip, who up until now, has kept quiet.

“I used to be what John Cleese once described as the living dead – I was a chartered account.”

Another Shedder, John arrives late. “I was a financial economist,” he says, which is soon somehow construed as a ‘communist’ and he gets the blame for the recession in 2008.

“The group has two aims,” continues Mike. “The first is to bring a social life to those who are isolated and the other aim is to provide for the community.”

Graham is one member who finds solace within the group.

“There’s been a lot of talk on Radio 4 over the last few weeks about loneliness and depression, especially in men. Certainly anyone who has lost a spouse will have developed that. My life is very full and very, very busy but it doesn’t matter where you are or what you’re doing, it still hits you.

“But we never pry,” adds Gareth. “People here say what they want to say and you don’t have to prove that you’ve been through something traumatic to join us. But we don’t go asking too many uncomfortable questions.”

“We’re a caring organisation but we’re not carers,” says Mike. “In the past, we’ve had people who have been left with us by their carers but we’re not cut out for looking after vulnerable people like that. We’re here for the camaraderie and there’s lots of it.”

Rhiwbina has benefited from the club’s second aim.

“When we started, our first task was to refurbish the garage and install workbenches and racking. Second-hand tools and timber were donated by members of the public and local organisations.

“In addition to our workshop, we rent a large allotment in Birchgrove where we have installed a poly-tunnel, a shed donated to us free by a local garden centre, and a greenhouse donated by a local resident. We have also built a patio and installed garden furniture as a rest area and are currently constructing raised beds. We have started to meet occasionally at the Wendy House in Rhiwbina too for a general chat, cuppa and to plan new projects.”

The group has made four planters for Rhiwbina Library and is working on wheelchair-friendly planters for the City Hospice. They’ve also built a new notice board at the Wendy House in Rhiwbina and restored benches in the community garden at the rear of the Canolfan building.

“We have also built a tree bench for the Macintosh Community Gardens in Roath, removed overgrown vegetation at the rear of a charity shop in Llanishen and last year, we hosted a visit by Cardiff Young Carers to our workshop. We have also been visited by the MP for North Cardiff, local councillors, Shedders from other Men’s Sheds and university students who interviewed and filmed us as part of their thesis work. We’ve also just successfully registered as a charity.”

The group isn’t currently looking for new members as the premises they have is very small.

“We could possibly look to get bigger premises and we also have the option of maybe setting up another group,” says Mike. “But that’s for the future. Right now, we’ve got a planter to finish.”

Among all the banter, laughter and the smell of woodwork and grease, there is a genuine affection and maybe even love among the group. For all the heartaches that go on behind closed doors, the Men’s Shed provides a time and a place for the men to be themselves among their peers. On paper, they’re an unlikely mix. But put together, the group works perfectly.

And the one thing that bonds them all together?