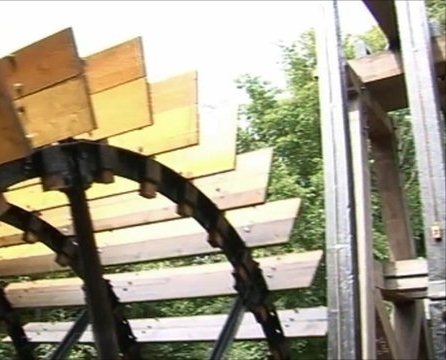 Following a partial restoration by volunteers from the Oxford House Archaeological Society (Risca) in the 1970’s and 80’s the pump was handed to the Council. Interest in the pump was revived through the enthusiasm of Robin Williams one of the original volunteers and a review of the Melingriffith Conservation area which took place in 2007. This led to public meetings and the Council and Cadw providing the necessary funding to complete the current restoration.

After some delays due to bats roosting in the tiny wooden cracks of the rocker beams, the pump was removed in March 2010 and spent the spring and summer in Penybryn Engineering workshops, Hengoed, where the timber components were replaced and the metal work refurbished. Work on the Melingriffith site included repairing stonework to the leat wall and replacing the sluice gates.

Reinstallation of the pump started on 14th October when the main parts of the structure were crane-lifted back onto site. There was quite a buzz on site with a mixture of Friends of Melingriffith Water Pump committee, press, politicians, local residents past and present and volunteers who had restored the pump in the 1970s and 1980s.

The project was funded by Cardiff Council and CADW, project managed by Opus International Consultants with the restoration work carried out by Penybryn Engineering. Several people tell me that the work is of an excellent standard. The pump looks fantastic and I am assured that with the right maintenance ‘she’ will last in excess of 100 years.

The reinstallation work will be completed over the next few months and once againÂ the wheel will turn, though for the time being powered by electricity rather than water (possibly a future project?).

Friends of Melingriffith Water Pump will now turn its attention to working with Cardiff Council in maintaining the pump and we intend holding an open day to celebrate the restoration, though this may be delayed until spring 2011 while the electricity company to put in a meter and H+S and insurance issues are sorted.

The wheel will be turned electronically every 1-4 weeks for maintenance, and we may do this in conjunction with opening the site to the public. Other plans include publicising the pump for educational purposes, holding regular open days, using the site as part of local walks, organising volunteer work and documenting the public’s memories and experiences of the pump and surrounding area.

I’m really hopeful for the pump’s future, and the Friends group will be fundamental to making it a success this time.

Anyone who would like to find out more, support our work or share their stories and memories can contact us via our website www.Friendsofmelingriffithwaterpump.weebly.com or come along to our next meeting 7.00pm on 20th January 2011 at Whitchurch Rugby Sports and Social club, Samuel’s Crescent, Whitchurch.