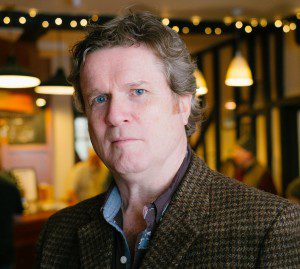 I was a largely unsuccessful actor in Cardiff in the 1980s and a marginally more successful musician in London in the 90s. The next decade saw me writing for the BBC and S4C until S4C imploded and BBC Wales turned away from regional drama towards doctors and aliens and sometimes doctors who fought aliens. Faced with the prospect of script-writing gigs on Hollyoaks and Doctors I remembered my noble maxim: ‘I’d rather shovel shit than do bad art’, tho’ bad art is better for your love life.

In the absence of paid writing work I got myself a minimum wage job in the Dylan Thomas Boathouse in Laugharne, and created the Youtube channel David Garland Jones whose slogan was ‘No budget. No contacts. No hope.’ Never was a brand more prescient. However, DGJ lead to actor Russell Gomer being ‘discovered’ and cast as Ianto in Stella, and me doing some video and social media work. And then I started getting writing work again and hopefully I can now put away my shovel.

Currently I’m working on a collaboration with artist Marc Rees for National Theatre Wales called Raw Material: Llareggub Revisited which plays out in Laugharne on the first weekend in May. I also created the website www.laugharnelines.co.uk and am writing an essay on Dylan Thomas for Bloomsbury.

And then there’s the novel… Despite Liam Gallagher ‘dancing’ at one of my gigs, and Jarvis Cocker saying a song I wrote was ‘cool’, I ended my London days working for a VW car dealership in St. John’s Wood London. My far more successful sister, Catherine Tregenna (DCI Banks, Law & Order, Torchwood) and I sent a script into the BBC and a youthful mop-topped script editor (who later transformed himself into the celebrated playwright Gary Owen) somehow found it in a large pile. We then pitched an idea to the BBC about a series set in a car showroom. They bought it, paid for it, sat on it and then returned it to us, which makes it sound like an impractical chair. The following day S4C bought the chair and liked it so much so they commissioned a second chair.

However, despite the chairs winning many awards, the third chair was cancelled. (I’m not sure where I’m going here…) 30,000 lovely Welsh souls saw the TV series Cowbois Ac Injans (Cowboys and Engines/Injans) which went out on Sunday nights back in 2006/2007 but that wasn’t enough for me. This world we had created was intoxicating and I wanted to find another platform for it. A musical seemed too challenging, epic poems are a tad out of fashion, so a novel it was. And four years on, actually is. 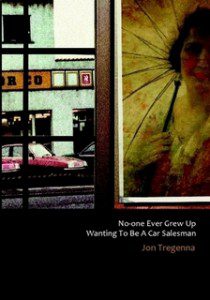 Now, most of us see car salesmen as unscrupulous crooks.

This antipathy towards used car salesmen crystallised in 1960 when the Democrats derailed presidential hopeful Richard Nixon’s campaign with the line, ‘Would YOU buy a used car from this man?’ Seven years later, in The Beatles’ classic, ‘She’s Leaving Home’, what explanation was given as to why a young woman would cause such heartbreak to her family? She was, ‘…meeting a man from the motor trade.’ Latterly, Swiss Toni, Only Fools & Horses and Eastenders have done little to increase the public perception of society’s much maligned motor merchants.

My novel deals with Wheelers Garage – the apostrophe long lost – a family-run business ticking over in a Welsh valley. The staff are quick-witted and enterprising but have issues with love. Much like the cars they sell, they have been around the block a few times and have had the odd prang. What also unites them is that they will say whatever is necessary to close the deal, whether it is cheating, blackmail or whose turn it is to make the tea.

Why people should buy it?

The simple answer is that, in the world of Anglo-Welsh comic fiction it is funnier than anything by Malcolm Pryce. Then again, maybe if I’d called it, ‘No-one Ever Grew Up Wanting To Be From Aberystwyth’, it might have a better chance of being a success. It’s a fun book, with accidental depth, and the only two people I know who have read it from cover to cover in the week since it’s been out are Karl, the guy who designed the cover, and Tony, my 86 year-old neighbour with a bad ear. Both said it was great and I can only respect their opinions. ‘No-one Ever Grew Up Wanting To Be A Car Salesman’ is available here from www.lulu.com. If you buy it you’ll make an ex-car salesman very happy. I’ll even throw in a set of mats, 6 months tax and a full tank of petrol.