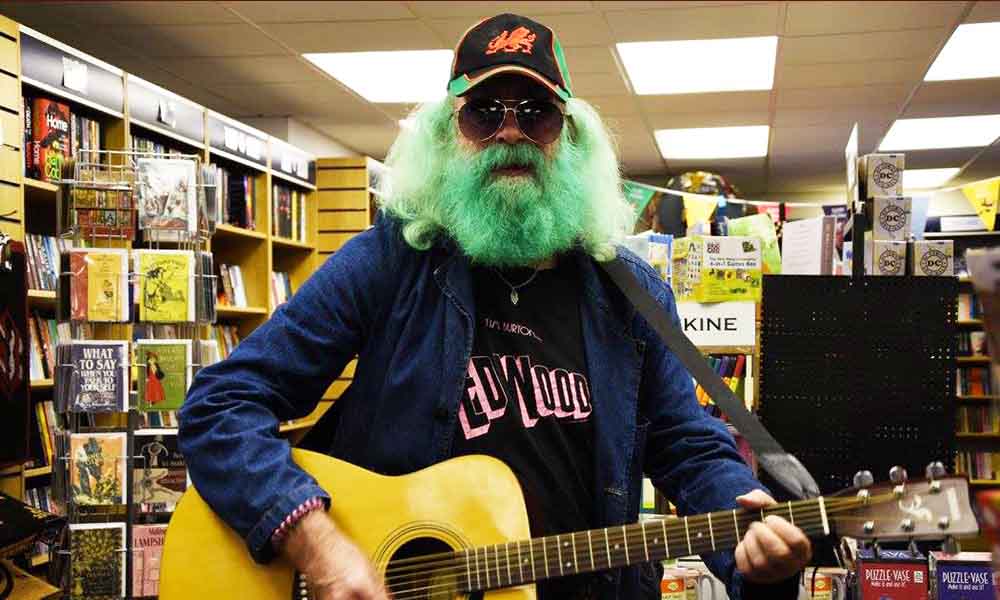 Here’s a question for you: what’s got a green beard, writes about nature and comes from Llandaff? Got it? Give up? The answer is Steve Andrews.
Steve is a singer-songwriter, writer and journalist with a strong interest in botany and conservation. And he’s through to the live auditions of Britain’s Got Talent. Living Magazines caught up with the man known as the Bard of Ely.

What effect did your childhood have on what you do now?
My childhood gave me a love for nature and, from around the age of 10 onward, an interest in pop music. Both these passions have stayed with me and have become part of my work as a writer and as a musician.
In the case of the natural world, besides giving me something to be taking pleasure in and finding out about wherever I am, it has given me subject matter for my writings; and so I have written many articles on plants and wildlife for various publications when I have been living abroad, including for the Tenerife News and the Tenerife Weekly newspapers, and Mediterranean Gardening and Outdoor Living magazines. In the UK, I have contributed articles about foraging to Permaculture and Welsh Coastal Life magazines. I have also been published by Moon Books with two books about herbs: Herbs of the Northern Shaman and Herbs of the Sun, Moon and Planets.

What does Llandaff mean to you?
Llandaff is where I went to school as a child. I started school at what is now the Llandaff Institute, and for me it has been strange finding that it now has a bar and open mic nights. I actually played there last year. As a boy I used to spend my pocket money at Pickards sweet shop on the corner by the Village Green. I used to spend a lot of time down Llandaff Weir too where I would catch fish like eels, loaches and sticklebacks, and frogs and newts in the ponds that were once there. As a boy I used to collect conkers in Insole Court, and years later in the 1970s I worked there as a gardener for Cardiff Parks Department. One thing I really like about Llandaff, though, is the way it has kept its village atmosphere and so much of its past.

You’ve been described in some quarters as a hippie. Is this a fair description?
I was once called ‘South Wales’ most cosmic hippie guru’ in the South Wales Echo and I can see why the term hippie gets applied to me. I have had long hair, a beard and flamboyant clothing most of the time since my late teens. I have also had an interest in various branches of alternative culture and I was very much a festival-goer. I started going to these events back when I was 16. I went to the Bath Blues Festivals, two Isle of Wight Festivals and many of the free festivals back in the late 1960s and early 1970s. And I used to do a lot of hitchhiking and that is something hippies do.

Your love of nature shines through. For you, what makes it so fascinating?
Everything about nature for me is simply so incredible and beautiful too. I am fascinated by the complexity of it all, by the complex life-cycles of animals and plants, and how one species depends on others. There is a ‘magic’ about the natural world. I am still as amazed now by how a butterfly or moth transforms from a caterpillar to a chrysalis or pupa and finally to a winged adult, as I was when I was a child. I am also fascinated by how some form of life has adapted to live in every habitat on this planet. 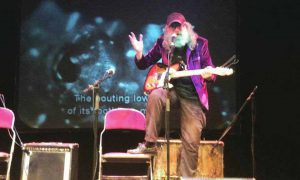 How does art allow you to express yourself?
I express myself artistically as a writer, a poet, a singer-songwriter, a performer, and with how I dress. Words are my tools as an artist, and all my songs are written as lyrics first before I compose a tune. I was first inspired by the great singer-songwriters, including Bob Dylan, Neil Young, Joni Mitchell, Leonard Cohen, Donovan and Cat Stevens. It was their words that spoke to me, far more than their music.
As a performer I like to create audience participation. Then it becomes a shared creative experience and everyone has a good time. I play a cover of Stand By Me and this always gets a great response from the audience because I encourage them to get involved by singing along, dancing along and standing by me!

Where did the name The Bard of Ely come from?
In 1998 I had a regular column in Big Issue Cymru and it was this publication that dubbed me the ‘Bard of Ely.’ This was because I was known to the magazine as a local singer-songwriter and poet, and I was living on the Ely estate at the time. So it was an apt description. As a matter of interest, I was Peter Finch’s guide to Ely when he was writing the first in his series of Real Cardiff books.

How did the Britain’s Got Talent episode come about?
Over the years, many friends have told me I should enter these TV talent contests, and for some reason I haven’t. I suppose I just couldn’t see myself as right for these shows, but then one day back in September I saw a notice somewhere that there were going to be auditions for Britain’s Got Talent in Merthyr Tydfil, and I thought, why not give it a go?
My performance went down really well and it was all captured on camera. About 10 days later I got a call to say I was through to the next stage, which was another audition in Birmingham. Eventually the big day arrived and when I got to the ICC in Birmingham I really got an idea of how big the BGT contest is and how many other people enter it.
I was asked to pretend Simon Cowell was there and to introduce myself and tell him what song I was going to do and why. Anyway, it all appeared to have gone down really well, but again I was told that I would have to wait to hear from them again to find out if I was successful. Some weeks later I was thrilled to get a phone call congratulating me on making it through to the next stage which will be before the judges and an audience, and will take place in London, Birmingham, Manchester or Blackpool. I know this will be in January or February but haven’t been given a date or venue yet.

What’s with the green beard?
I was in the first Green Man Festival back in 2003 and was an MC as well as appearing on stage as a singer and musician. I thought if I dyed my beard green that it would go with the image of the festival and also reflect my love of nature. It’s stuck ever since.

What do you have lined up for the New Year?
It is going to be a busy and exciting time for me, kicking off with a gig at Chapter Arts Centre on 7th January, when I will be heading the bill for a Wyrd Wonder Evening of Music and Poetry, presented by Marc ‘Zeuk’ Roberts.
I am also looking forward to continuing work on an album being produced by Jayce Lewis and recorded at his fabulous Northstone Studios in Bridgend. We already recorded my song Ever Yours. Then there’s my Britain’s Got Talent audition coming up, and in early February I am doing a book signing event at Wellfield Books to promote my new book Herbs of the Sun, Moon and Planets.
I am also looking forward to getting together again with fellow poets Mab Jones and Rufus Mufasa to see what we can create together. It is something we have been planning. 2017 already has plenty in store for me!

You can read more of Steve’s musings at his blog. Head to: www.bardofelysays.blogspot.co.uk