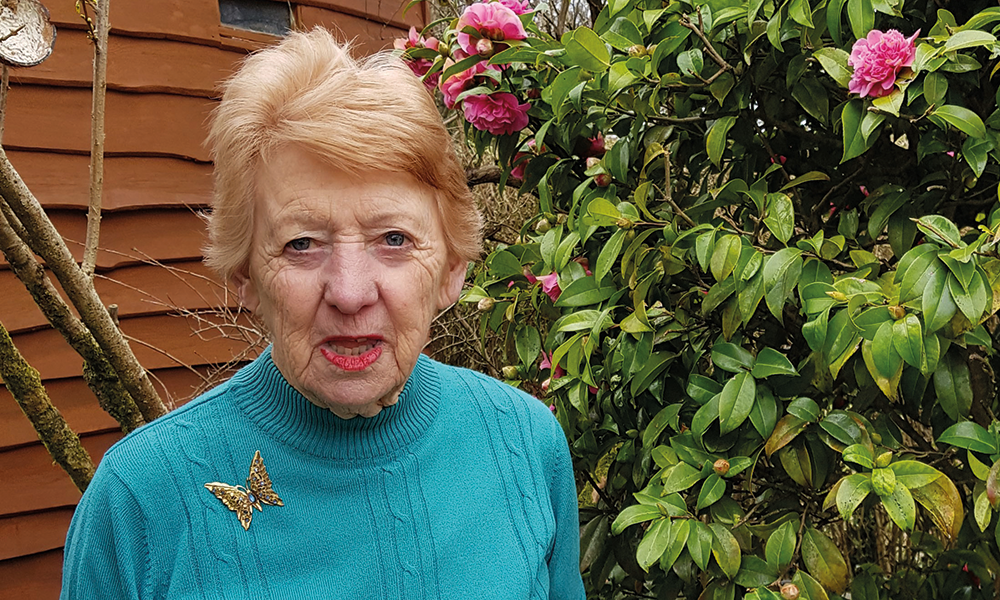 Mary Clarke is in a bit of a predicament.

“You see, I’ve heard that they put the cream on their scones first, and then their jam at the Palace. I’ve always done it the other way around – I put the jam on first and then the cream.”

Mary is preparing for a tea party at Buckingham Palace in June after being awarded a British Medal Empire in the latest New Year’s Honours List. She has been recognised for her Services to the Community.

“When I first got the letter, I had to read it three times. It didn’t register in my head. I kept asking myself ‘What’s all this about?’. Then when the penny dropped, my first thoughts turned to who was behind it.”

Mary’s award follows years of dedication to the Rhiwbina community.

“I’ve been involved with community groups in Rhiwbina as far back as I can remember, probably more than 40 years now. There are two reasons for this – first, I like people and secondly, the people in Rhiwbina are my neighbours.

“They say that my contribution to the Flood Defence Scheme was the main reason for the award,” Mary explains, but actually her services to the community go way above and beyond this; fulfilling her duty as Chairwoman of the Garden Village Residents’ Association and playing a pivotal role in Rhiwbina village life for decades.

Mary is modest about her achievements:

“In truth, there were a lot more people involved than just me. The brook that flows through the village had been flooding for years. The time had come though when things were getting a little more serious. The more they built up in the top half of Rhiwbina, that meant more water down at the bottom half of the village.

“I can see the brook from almost every window in my house and I love that brook, I really do – the sounds, the look of it and the wildlife. But of course, when it rains, it becomes full.
“My role in all of this over the years was to get together a group of neighbours who could at whatever time of the day or night – it was mostly night – inform people of potential flooding in the village. Once I had enough information to know that the brook was going to overflow, I would go across the road and tell them to get their sandbags out as water would be coming up to their door. In some cases, I’d tell them to make sure that they had all valuables lifted up off the floor in case they got damaged – electrical things, handbags and photographs. I’d also tell people to lift their curtains up off the floor because if the water came in, and the curtains were down to the floor, they’d get damaged.

“We’d also phone around at whatever time of day or night to let people know. My brother Jeff lifted the main drain in the middle of the road one night, which you’re not supposed to do. But it was either that or the village faced disaster. He got told off by the Fire Brigade but he had to do it to relieve the pressure. Jayne Cowan would always turn up in flip-flops or sandals which always made us laugh as everyone else was wearing wellies. My team worked very well and was called out about half a dozen times over the years. In some instances, we’d check the forecast and take a look at the gauge in the brook and if things looked bad, it would be necessary to go running to the shops to warn them to get their sandbags out.

“We were the eyes and ears of the village and we got away with it 9 times out of 10, with lots of help from Council.”

But there were occasions when Mother Nature proved too strong.

“The worst occasion was in June 2014. The village was totally cut off. The water that comes in flood conditions is polluted with sewage and all kinds of things. The speed with which everything happens is frightening. Then of course, there’s the smell – the drains, the diesel, the oil; things go floating past – footballs, plastic chairs, bits of old wood.” 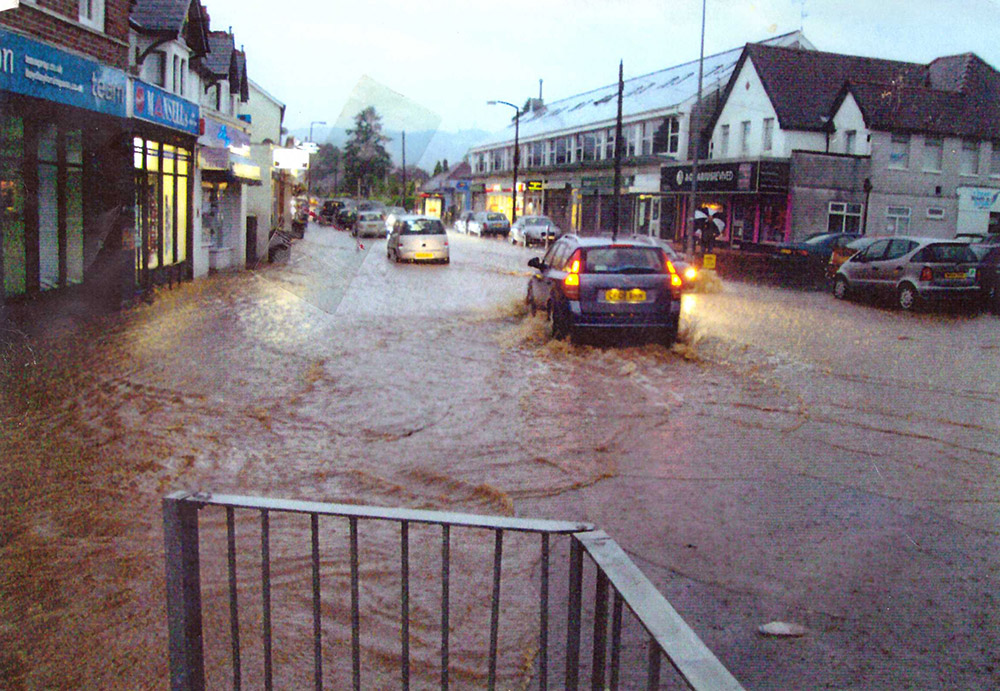 Mary’s work behind the scenes and genuine care for the community has a big impact on her life.

“I remember one afternoon when I had to leave the house to go to hospital. It had been raining heavily all day and as I arrived, I couldn’t help but think that I was abandoning my post. I got on the phone and called back to the neighbours.”

Eventually, the Welsh Assembly and Cardiff Council applied for European funding for the Flood Defence Scheme to protect over 200 shops and offices in the village, and the application was successful.

“We then had a new challenge – and that was convincing the people who were looking at it on paper that building the wall adjacent to the brook was necessary! What they didn’t appreciate was that it would be covered in hedera ivy and they were worried about a concrete wall ruining the look of the brook. Now of course, it’s all very tidy. We thought it would take ten years or so to be completely covered but even now after just two, you’d hardly notice it was there.”

The brook is now monitored around the clock by a raft of cameras and measuring equipment.

“Several weeks ago, we got the alarm that the levels were rising,” says Mary. “We were all a bit confused as it hadn’t rained but further inspection revealed that some of the grating was chock-a-block and the backed up water triggered an alert.”

Late last year, Mary herself was inadvertently to become the cause of another alert in the brook:

“I fell in the brook. I had been tidying the rockery and slipped. It was around 8pm so no-one could hear me calling for help until a woman eventually walked past. She was on her way to Beulah Hall with a big pilates ball under her arm. She couldn’t figure out where my voice was calling from. ‘I can hear you but I can’t see you dear,’ she said. ‘I’m in the brook,’ I replied. I remember screaming on the way in and then ‘thud’. I was worried I had broken my hip. Thankfully I managed to stand but I couldn’t climb out as my hand was so painful and it was bleeding quite badly. I was cold and in shock and started to get worried that they would have to call the Fire Brigade. But then a hero came up the road. He said ‘stop talking and do as you’re told. I’m going to lift you out.’ I said ‘Hang on a minute – I don’t want you having a heart attack or giving yourself a hernia.’ He came down and picked me up like a kid and put me back on the bank. I then spent 5 hours in A&E!”

Mary still sees herself very much as part of the team that has helped keep the village ticking for over 4 decades. “It’s all about teamwork when it comes to reaching a goal for the greater good in Rhiwbina. Someone will have the reins, someone will know the way and I’m very happy that I’ve done my bit over the years. I have had outstanding support from our councillors, the police and Resources Wales.”

People may be unaware, but Mary has been instrumental in many of the important events in Rhiwbina that we take for granted. She tirelessly organises the Santa Sleigh Run every year and arranges other events such as street parties and celebrations in the Garden Village. She has also helped create the environment in which we live, with the daffodils resulting from her ‘Adopt a Daff’ campaign years ago, which led to the residents planting thousands of bulbs that flower every Spring. The trees by the library were all planted in memory of loved ones and the avenue of trees leading to Parc Y Pentre were bought from Bring and Buy sales and cake mornings that she coordinated.

“I’m very honoured and humbled to have won this award and wish I could share it with my neighbours who always came together when we needed to. When I first found out that I’d won at the end of November last year, I wasn’t allowed to tell anyone. I had to sign an Embargo of Information and believe me, with my tongue, I found that very hard! My son was working in the Royal Mint where they make all the medals for the entire Honours List. When they got to the British Empire Medals, he actually made my medal and told all his work colleagues that it was for his mum. He had a tough time trying to convince them that he was telling the truth!”

Mary will be presented with her medal at Cardiff’s City Hall by Morfudd Meredith, the Lord-Lieutenant of South Glamorgan and then goes to London in June.

“I’m off to the Garden Party at Buckingham Palace. I’ll be taking my son and I’ve told him that I am going to be doing it my way, protocol or not! He’s warned me not to take cuttings of the Queen’s plants but I like to tease him! He has informed me that we will have a bottle of red wine on the train on the way up. Mind you, we can’t get into the Palace until 3.30pm and then the Queen arrives about 4.30pm and we may be finished by 5.30pm. He said we might have to have another bottle on the way home!” says Mary giggling.

For Mary, the award is more for the village than her as an individual.

“Rhiwbina is a living, breathing, working thing – a nucleus of people who are a beating heart. People often ask me what has changed over the years in village. The shops are different and there are a few new businesses around, and people don’t ride around on bikes any more. But essentially nothing has changed. I spoke to a lovely woman only the other day who had moved away from the area. She loves her new house – but ‘By God, I miss this place!’ she told me.

“Rhiwbina is a timeless place – that’s what makes it so special. As soon as you come over the brow of that hill and you see the Wenallt, you know you’re home- same as Beulah Road – you see the rooftops of the white houses in the Garden Village and you get that same feeling. The village is special on festival days, even if there’s a freezing biting cold, or even if it’s neighbours sitting out on Y Groes with a bottle of wine on a late summer’s evening, this magic is still there.”

Rhiwbina is in Mary’s blood. She’s is part of the very fabric of the village. Her contributions have brought smiles to generations of Rhiwbina residents.

Sadly, Mary’s brother Jeff passed away suddenly several weeks ago and it’s a bittersweet moment for her:

“I’m sad that he’s never going to see me picking up my medal. But he did know that I was going to get one.”

Life does go on and for Mary, there are some wonderful times to be had this year.

We owe her a great deal and so if you are raising a toast this spring, raise one to Mary Clarke.