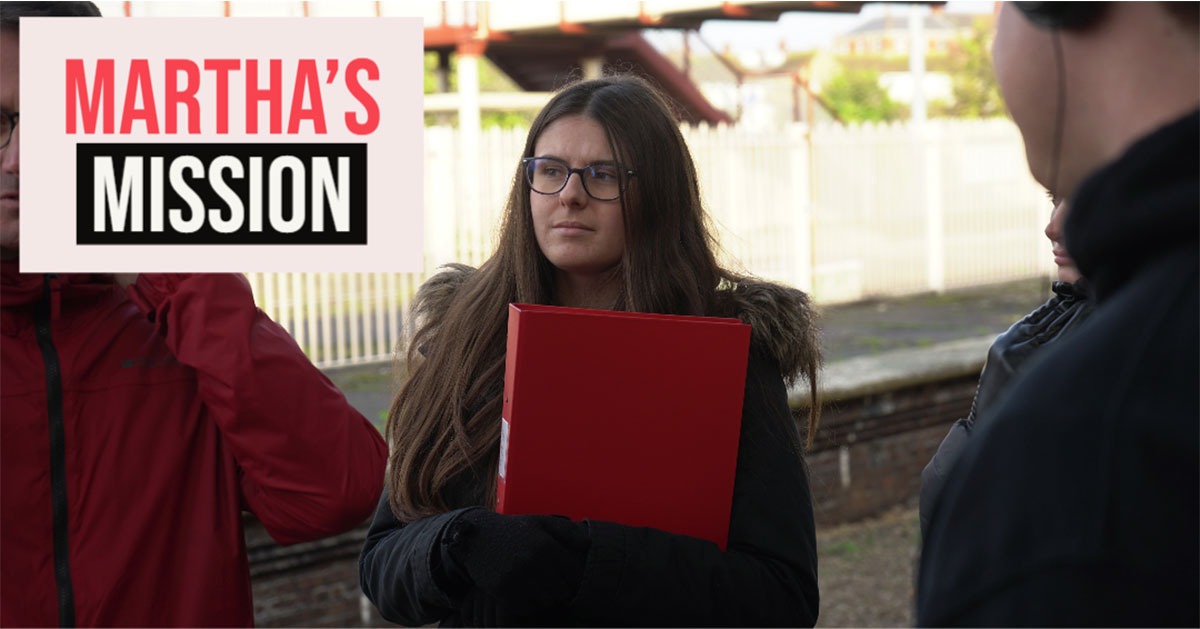 Following a traumatic event at university, one Rhiwbina woman is determined to raise awareness of one of society’s darker problems

The car boot opens and inside, there are shopping bags full of milk, biscuits and bread.

It’s a cold winter’s night but one warm Rhiwbina household is a hive of activity. For 24 year old Martha Clarke, it’s another small part of her ongoing campaign to change things for the better. And this particular small part is a short film she’s helping to make for an event she’s arranging in the New Year.

The second Martha’s Ball will be taking place in Cardiff in February, designed to raise awareness of one of society’s big problems.

“It takes a lot of planning,” says Martha, sipping her coffee. “I start by finalising the date and venue, and I take things from there.”

And despite the glad rags and champagne, there is a very serious reason for organising the ball.

“At the end of my first year at university, I was raped. I spent the following year and a half telling myself that it didn’t happen. You see, I’d always been under the impression that rape involved dark alleyways and strangers but that didn’t happen in my case.”

Martha’s experience is one that is not uncommon. In fact, it is precisely why Martha is on a mission to change perceptions.

“One of the themes in the first ball that I arranged earlier this year is consent – the myths and misunderstandings surrounding it; the absence of education to explain the importance of it, and the long-lasting impacts on physical and mental health when it isn’t respected.”

For Martha, depression took hold soon after the incident. It took 18 months for her to come to terms with what had happened.

“I moved away from Cardiff which was sad as it’s my home, but I would have found it difficult to move on emotionally here with my perpetrator being in the same city. Who knows when I would have bumped into him?

“While still at university, I joined the Domestic Violence Awareness Society, becoming President there by the time I’d left. I also worked with the Response Team, which was the reporting tool at Cardiff University.”

Martha also joined two groups outside of university in a bid to help others, but also to try and help ease her private pain.

“I joined Plan International, an international organisation that works with vulnerable children and especially girls so that they can learn, lead, decide and thrive. I also joined the Full Circle Youth Advisory Panel – both of these groups promote gender equality and I had to go to weekly and monthly meetings. It was great because I learnt about planning campaigns and had to give speeches.

“My first speech was in 2017 and no one knew at that point what had happened to me. I spoke to 200 people about the extent of sexual violence on university campuses.

“It was about two weeks later that I felt that I had to tell my family about what had happened to me. I couldn’t keep it in any more. They were very shocked. I remember my dad saying to me, and it’ll always stick with me, that ‘there will be a way through this – we don’t know what it is yet, but we will figure it out.’ That was the first thing he said to me.

“My mum’s been brilliant too. She’s really helped with my mental health issues and my sisters have listened to everything I’ve had to say. I’m very lucky.”

Martha has put her new-found skills and confidence to good use.

“Eventually, I decided to arrange a ball of my own that would raise awareness of consent. I arranged to have a variety of speakers there and I also wanted to say something myself. I read out a poem about my experience that no one had heard before.

“Pushing myself has given me new experiences that I never thought I’d find myself doing. I recently spoke in the House of Commons on behalf of Plan International, who were launching a street harassment campaign. I also submitted the poem that I’d read at the ball to be published in an online poetry book about Me Too and I had an email very recently to say that I’d been successful!”

But Martha still has work to do.

“One week after my first ball, there was an incident involving my perpetrator. The police said that they were going to investigate and asked if I wanted to give a statement.

“They then told me months later that there was going to be no action taken. The fact is that most of these crimes aren’t reported, and of those that are reported, less than 5% lead to a conviction. That’s not good enough.”

In Martha’s case, no one was brought to justice. She is keen to point out that the reasons for this are a wider problem.

“The reason for this is partly because a large proportion of society doesn’t know exactly what rape is. Many also don’t know when it’s happening to them; that they might freeze and not talk, or attempt to push the perpetrator off. You freeze with fear. Fear is also the reason why many people don’t come forward to report it and a culture of victim-blaming doesn’t help either. There’s a whole world of conscious and subconscious sexism out there in society and added to that, there’s also a huge misunderstanding of some of the mental health issues at play.

“Even living in London now, I still present symptoms of PTSD. I struggle at times when I’m on the Tube, when there are lots of tall bodies closing in around me.”

Martha has had to push through her distress and try and turn negatives into positives. Next year’s ball is going to be her second, and she’s hoping to more than double the amount of money she raised earlier this year.

“We raised £2,000 for Rape Crisis England and Wales at our last ball. The charity does incredible work but they only have one centre in Wales. They provide specialist support, legal advice and counselling to survivors; they also deliver training to universities and places of work.

“We are doing away with speakers for this ball and are having what’s effectively a short film festival for this next one. This includes the short film that my dad and his colleagues are making especially for it. After that, we’ll be looking to use the film to highlight the theme of consent. I’m currently looking for any legal people who might be able to help me!

“Last year’s event was great because so much discussion was triggered. I had people coming up to me and saying that they would look to implement more gender equality – football coaches, teachers and even parents. Those engagement levels really showed that the event had the impact that I was looking for.”

It’s this type of legacy that Martha is hoping to build upon in years to come.

“If I can change one person’s perspective, that will be something,” she says.

Even if it is just one person at a time, the Rhiwbina post-graduate will be hoping that she can help make the world a better place.