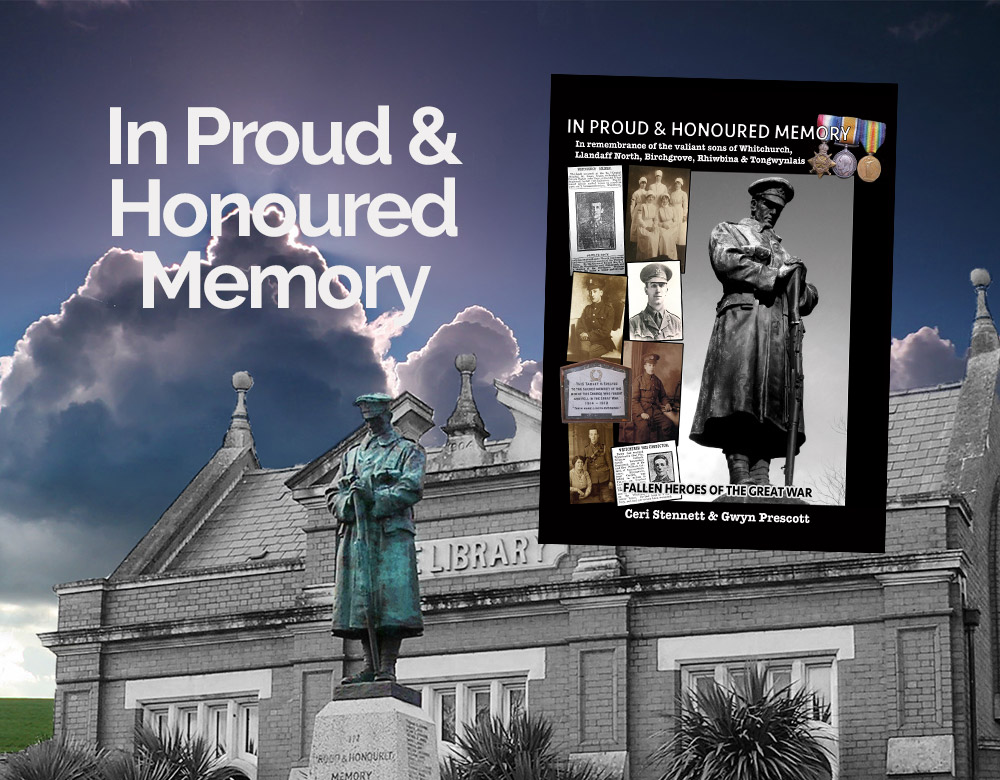 A new book takes an in-depth look into the stories behind the names on Whitchurch’s War Memorial. Writer Ceri Stennett explains why In Proud & Honoured Memory was written and what its readers can expect

“These were ordinary men caught up in an extraordinary war.”

Co-author Ceri Stennett is sat in his office. His bookshelf spans one entire wall. On another wall there are two sets of framed war medals.

“One set belonged to my great uncle, Samuel Gregory, the Welsh Regiment. He was killed on the Somme. As a kid, I always remember my dad Stan telling me about his Uncle Sam. The other group of medals belonged to a Cardiff man killed at the Battle of Jutland.”

It’s 100 years since the guns of war finally fell silent. The signing of the Armistice in November 1918 marked the end of the Great War but the effect that it left on the world would be felt forever.

“I often walked past the War Memorial outside the library in Whitchurch because that’s where I grew up. But there was one day last year when I just stopped and looked at all the names. I thought to myself ‘Someone has to write a book about this’ and then of course, I realised that that person was me.

“I got in touch with Gwyn Prescott, who has lived in the Whitchurch and Rhiwbina area for many years. His work on rugby history has been published widely, but he is also a keen researcher of the First World War and Cardiff casualties.

“We sat down and started pulling the pieces together. The first thing that struck us was that in the main, the men of the Whitchurch parish who served in the First World War were not soldiers. The vast majority were working men who went to ‘do their bit’ for King and Country.

“They received basic training but were fully expecting to return and continue in their everyday lives with their families and in their jobs. However, for more than 200 of them it was not to be, whether being killed in action, dying of wounds or disease or even succumbing at home after being invalided back to Blighty,” says Ceri.

The detailed book has come painstakingly together over the last nine months.

“That’s with me working three or four days a week on it,” says Ceri. “I’ve enjoyed doing the research and I’ve spent many days in Cathays Library.” The book delves into the lives of those men from the villages of Whitchurch, Llandaff North, Birchgrove, Rhiwbina and Tongwynlais who made the ultimate sacrifice in the Great War.

“Cardiff has a proud history in playing its part in times of war, and this book looks to tell the stories of the men from the north of the town who valiantly served, but failed to return.

“For most, the theatre of war was France and Flanders, but others met their fate in Gallipoli, Salonika, Palestine or in the Senior Service, the Royal Navy on the high seas around the globe. Many also served and met their end in the Mercantile Marine (Merchant Navy) whilst attempting to supply the UK with food, goods and materials. The youngest casualty in this book, Thomas Jenkins, a cook, was only 15 at the time of his death.”

Much of the material included has been newly-discovered from local newspapers of the time, from descendants of the fallen and the ever-expanding information available online. Census records from 1891, 1901 and 1911 have also been used to trace the civilian and family lives of the men. A real attempt has been made to portray the men as individuals, and not just as members of a particular battalion, regiment or corps. Readers can retrace the steps of the men by identifying their pre-war homes in the local area, many of which are still standing today.

“Every death is a human tragedy, but within this small part of the story of a catastrophic war, the book shines a light on stories of great selflessness, comradeship, devotion to duty and at times, great heroism. It was a time when for ‘King and Empire’ stood for the principles that many people lived by,” says Ceri.

The book also looks at areas around the central topic too: the growth of Whitchurch village in the early years of the twentieth century, the committee set up to establish the War Memorial for the parish and a special chapter on the work of Whitchurch Hospital. The psychiatric hospital became the Welsh Metropolitan War Hospital between 1915-1919, treating and caring for thousands of men who were evacuated back home with broken limbs and shattered minds.

“With the kind consent of Media Wales, we’ve been able to include contemporary obituaries of the fallen as they appeared in newspapers such as the Western Mail, South Wales Daily News and South Wales Echo. Details are also given of the men’s final resting places in Commonwealth War Graves Commission cemeteries and on their memorials around North West Europe and beyond.”

The effect of the war was to have large local ramifications:

“All walks of life are here – from a famous Welsh Rugby International, to office workers, teachers, bank clerks, policemen, tinplate workers, railwaymen, colliers, labourers, students and farm-hands. Men who served in the humble ranks of Private or Corporal, to Sergeants, Lieutenants, Captains and Majors,” adds Ceri.

Several of the casualties won military medals for gallantry, and the book also includes a section on some of the local men who won decorations such as the Military Cross and Distinguished Conduct Medals who did return.

As we have come to the end of the centennial commemorations for all of the Great War Anniversaries, Ceri and Gwyn hope that this book will serve as their humble contribution to paying thanks to those men who did not return and to those that did, but for whom life would never be the same again.

You can buy copies of the book here