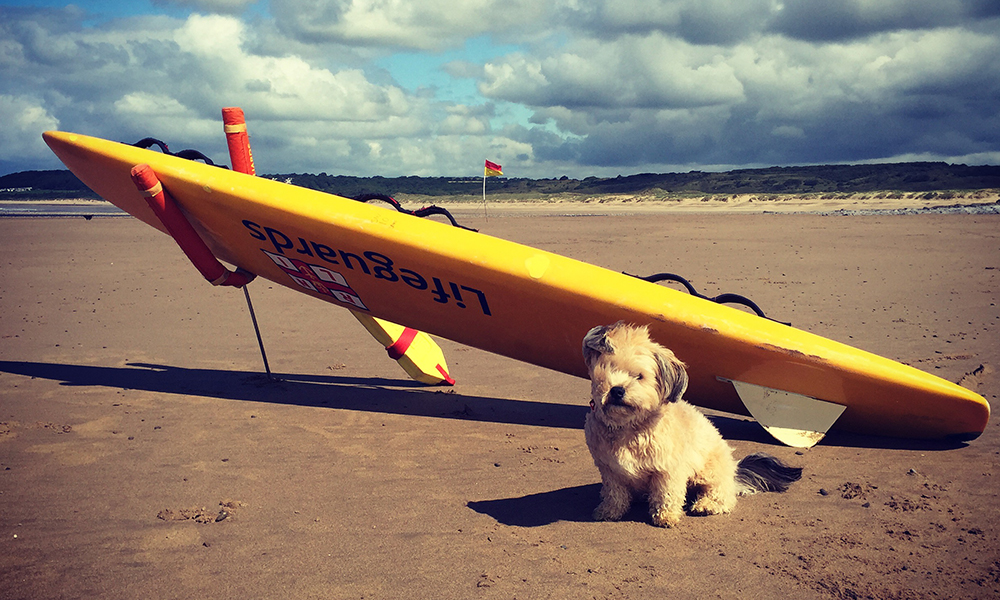 Rhiwbina is a favourite place for dog walkers. And among them walks a star of film and TV.

Owner Sarah-Jane and Gladys have become a well-known sight around the village.

“We got Gladys back in 2013,” says Sarah-Jane. “We had never owned a dog before so we did our research into what type of dog we’d like to come live with us. We were wanting a quiet dog and the Havanese breed seemed perfect for us.

“We got in touch with the Havanese Club of Great Britain and were put on a waiting list. When it was our time, we were called up to Derby where the litter had been born. We drove all the way up to Derby to see Gladys and once we were there, we had to undergo an interview so that they could check that we would be suitable owners. They asked all kinds of things – about our work, where we lived, what kind of lifestyle we had. We were also asked how we’d look after her if we were successful. 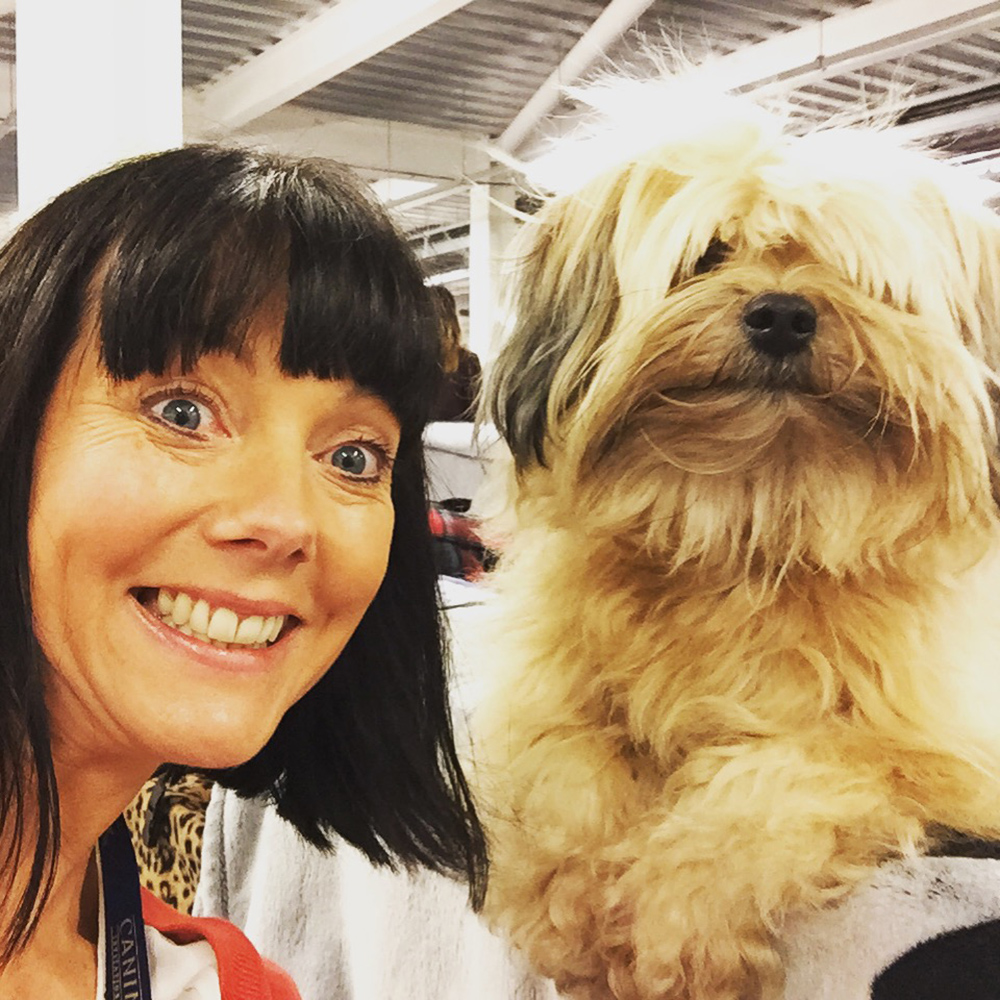 “I’d gone to a pet shop and bought loads of stuff before I went up there. What nobody prepared us for was the car ride back. Coming back home from Derby was one of the worst journeys ever. Poor Gladys, who was only 13 weeks old, was very sick in the car. We spoke to the breeders later who said that they’d not told us about the car sickness on purpose!”

Gladys soon settled into her new home in Rhiwbina, quickly becoming a favourite in the house.

“Over the next few months, we held a few parties where friends and family got to meet her.

It took a bit of time getting used to her being in the home. We were intending getting her puppy trained but I started training her myself. I worked specifically on agility and the basics and it ultimately paid off.”

It was Sarah’s work that helped propel Gladys into the world of showbusiness, which she now takes in her stride.

“My career started off in the world of fashion and I began my work in TV and film costume in 1994. By the time Gladys came along in 2013, I was well-established in the industry.

“I was working on a music video for Lewis Watson who had been signed up by Warner Bros. The video’s producers were looking for a dog and Gladys was still a little puppy at that point. Half my family ended up being in the video as Supporting Artistes and it was all filmed at Cathays Cemetery. Gladys wasn’t the only creature in the video – there was also a crow who had been trained to swoop down and fly off on demand too.”

It wasn’t long before more roles came along.

“After that, Gladys got a part in a dark comedy called Prevenge, which was mostly shot in Cardiff. She played the part of Gemma Whelan’s dog. Film-goers will know Gemma from Game of Thrones where she plays the part of Yara Greyjoy. 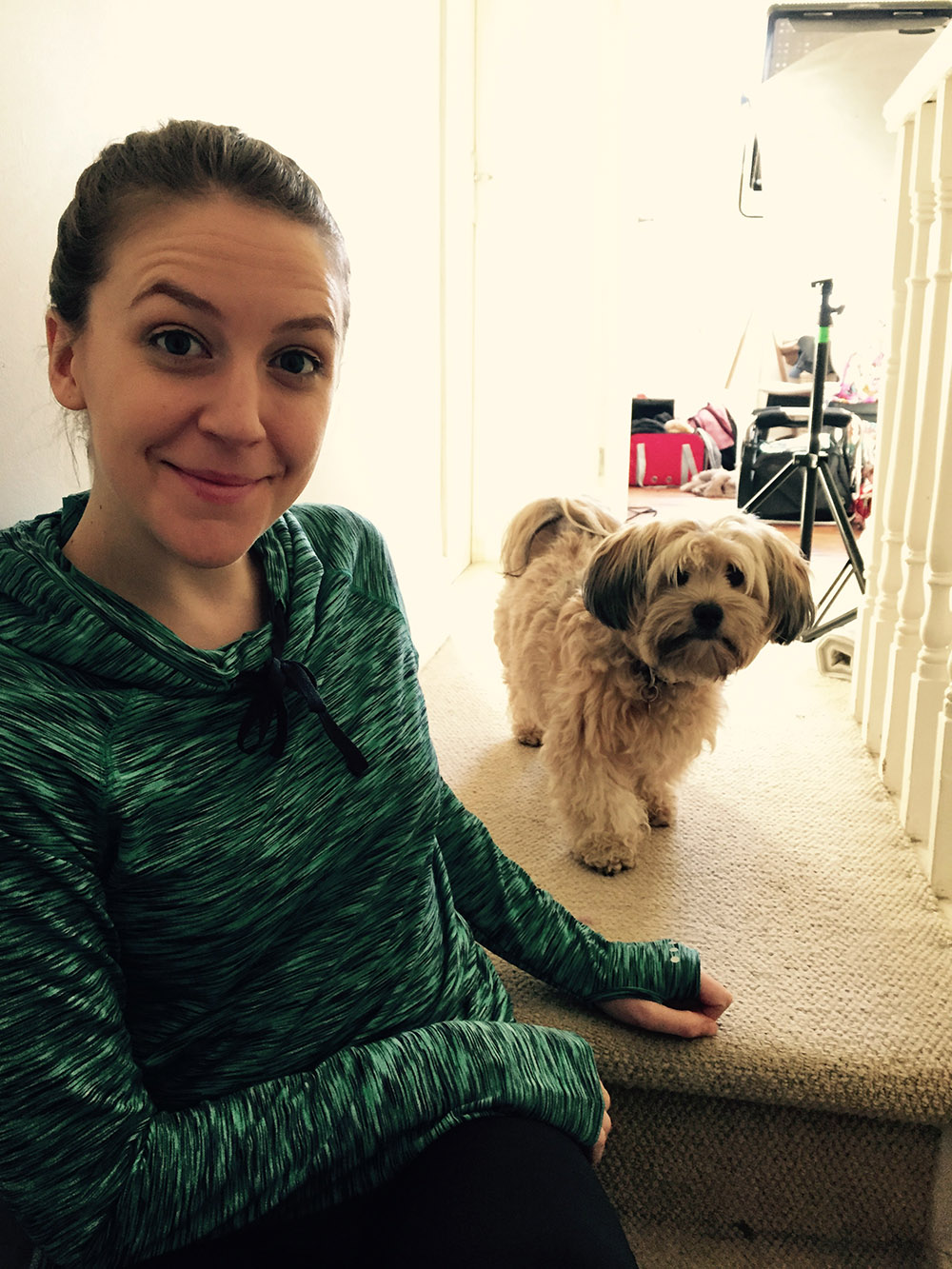 “Prevenge was nominated for a British Independent Film Award that year so it was nice to be involved with that,” says Sarah-Jane.

Gladys’s next role was one that she held for more than two years, becoming a popular character on a Welsh show.

“S4C commissioned a new comedy series called Anita. Caryl Parry Jones played the unlucky-in-love Anita, a proud Cardiffian who had to make a choice about moving to Anglesey when her new love had to move back there.

“We filmed both in Cardiff and Anglesey and when we went up north, we were given a cottage to stay at, which was lovely. Gladys had to do all kinds of things in this show. In one scene, she had to play the part of a barman and in another, she had to sit in a handbag.

“The training that I’d given Gladys really paid off because she became a real star of the show. It’s given us such a special bond and a huge amount of trust which allows us to do things with Gladys that she wouldn’t normally do.”

More recently, Gladys has played starring roles in more high-profile features. Viewers may have seen her in Keeping Faith and she also appears in a new Pixar movie – Showdogs.

“For Keeping Faith, we had to film both in the Welsh and English language as there were two versions of the series. There was one shot in particular that involved a 360° shot on a beach and we all had to huddle behind the camera as it rotated.

“The producers were looking for a cottage to film in with Gladys and they were very good because they chose to shoot in my mum’s house in Ogmore which meant that Gladys was familiar with her surroundings.

“We filmed Showdogs down at Cardiff City’s Stadium where they used some of the rooms. Although Gladys didn’t have a starring role, it was great to be the other side of the camera for a change, and not worrying about costumes which is what I usually do.”

Gladys is well looked after by both her owners and the cast and crew of the features she takes part in.

“Pamela Anderson was complaining on TV the other day about people mistreating animals in film and TV but I’d never put Gladys in a position where we know she’d be uncomfortable,” says Sarah-Jane. “Because I know her so well, I know what her limits are. I take lots of treats with us to each shoot but I’m aware that giving her too many will make her put on weight.

“Gladys is always very popular among the cast and crew that she works with. If we walk onto set together, I often hear ‘Hello Gladys!’ before anyone talks to me. People always talk to her in that high-pitched doggie voice that people do. We had a senior member of staff once who’d often get flustered and stressed during her work. She was very good at her job but when the stress came on, we always sent Gladys in to calm her down.”

Like other dogs, Gladys seems to be aware of sadness and illness:

“It’s funny how intuitive dogs are and Gladys is no exception. My mother-in-law was ill not so long ago and Gladys seemed to pick up on this and was trying to make her laugh by jumping on her and doing funny rolls on the bed.”

For Gladys, Rhiwbina is where she feels most at home.

“Rhiwbina is a great place to live. There are lots of characters in the village and we love walking around and meeting all the other dogs. In 2015, Gladys won a few prizes in the annual dog show at the Summer Festival. She picked up the Best Personality prize and then went on to win the overall competition. She’s very proud of that!” laughs Sarah-Jane. 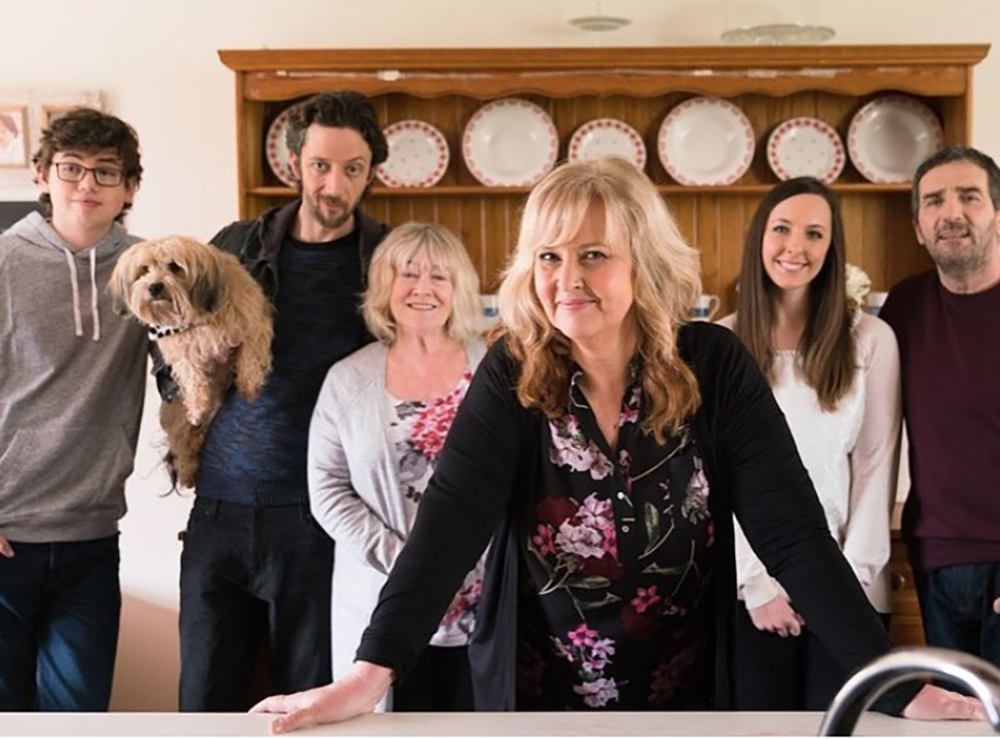 The cast of Anita

“We regularly take Gladys to Havanese Fun Days. They’re useful to us owners too because we can all chat to each other and swap notes. Gladys also stays in touch with her brothers and sisters which is nice. We have a forum on Facebook so we all get to know each other pretty well.

“We were on Caldey Island a few years ago and we took Gladys. While we were there, we stepped outside of a building and I noticed that one of the other dogs from the forum was stood right in front of me. We recognised her straight away. It’s this kind of closeness that makes our group special.”

Sarah meanwhile continues her day job, creating costumes for TV and film. She was short-listed for a BAFTA Cymru in 2011 for her work on Whites, which starred Alan Davies.

“I’ve just finished work on a new production that’s been written by Owen Sheers called To Provide All People. Michael Sheen, Tamsin Grieg, Martin Freeman and Meera Syal are amongst the all-star cast of BBC Wales’ latest landmark television drama commission as it celebrates the 70th anniversary of the NHS. I had to recreate nurses costumes from 1948.

“You won’t see Gladys in this one though. She does deserve a rest at some point.”