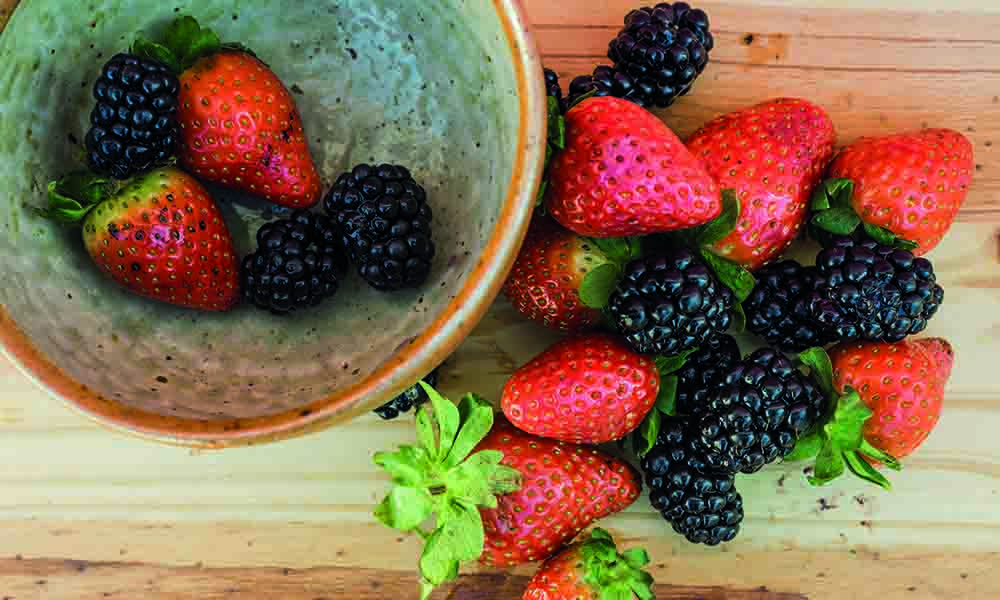 You can enjoy the fruits of summer from your own garden. Kevin Revell shows you how to make the most of your seasonal harvest

Home-grown fruit, bursting with flavour, is a vitamin and mineral-packed addition to the diet. A few berries sprinkled on the morning cereal or mixed in with a smoothie is a healthy option, but they are also invaluable for making traditional pies, crumbles and summer puddings. The fruit can also be frozen or preserved for use later in the year in jams and jellies.

Soft fruit can be defined as that which does not grow on trees, but on bushes which are perhaps the easiest and most productive plants we can grow in our gardens. They reward us with huge harvests of fresh fruit for a minimum of effort. They are often seen as old-fashioned or the preserve of allotment gardeners but most gardens should have room for a few bushes and if not, I would advocate making room by digging up part of the lawn or patio. 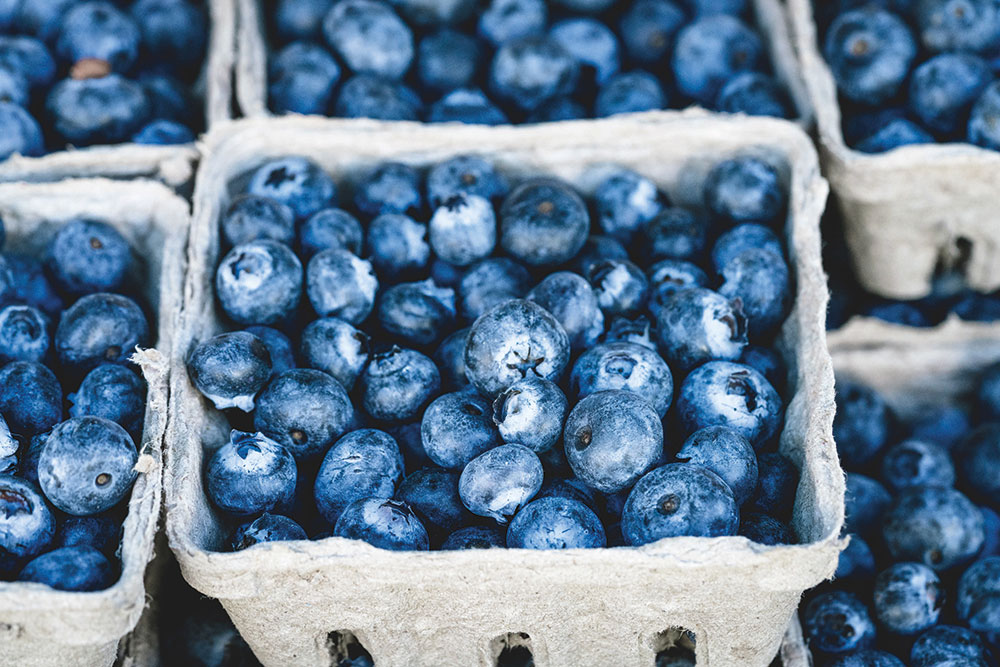 Seeing the prices of blueberries and raspberries in the shops makes me wonder why more of us aren’t growing them at home. They don’t travel well however and the season is short, so when ripe, the fruit needs to be picked and eaten promptly or preserved to prevent it spoiling. Of course tasty bite-sized berries are going to be attractive to other visitors to the garden, notably birds. It may be that bushes will need to be grown under the protection of netting or cloches but growing soft fruit is relatively trouble free. Good, well-drained, manure-enriched soil is ideal at planting time.

A bucket of wood ash around each plant or a dressing of sulphate of potash will ensure a good crop while a mulch of compost will keep the roots moist and weeds suppressed.

That so many children are familiar with ‘Ribena’ but so unfamiliar with the fruit from which it comes is one of life’s great mysteries. Blackcurrants are easy to grow, requiring only some of the older shoots to be pruned down to the ground each year in autumn or winter. Remove low branches to prevent them trailing on the ground and to keep the centre of the plant open. Chains of glossy currants are formed on the one year old wood, plants performing best in light sun or part shade.

The large bushes can become 1.5m high and wide so need planting this distance apart to allow them to reach maturity. ‘Ben Connan’ is the most popular variety while ‘Ben Sarek’ is more compact. ‘Big Ben’ is a relatively new variety with exceptionally large sweet currants.

Another easily grown plant – although the pruning is a bit trickier – redcurrants fruit on spurs produced from older wood so it is these which require shortening in autumn. Only the occasional branch should be removed to keep the bush open and productive. Harvesting the fruit involves cutting the jewel-like chains and removing the currants with a fork in the comfort of the kitchen where they must be used promptly to avoid spoiling. ‘Jonker Van Tetts’ is the leading traditional variety but the newer ‘Rovada’ and ‘Rosetta’ have sweeter, larger currants.

The pectin-rich juice is often added to other fruits such as raspberries and strawberries when making jam to aid setting. It can also be used to make a sharp tasting jelly.

Gooseberry plants will tolerate a degree of shade but are more resistant to mildew and the destructive gooseberry sawfly if they are in a more open position. The sharp taste and spiteful thorns are not ideal for everyone but ‘Invicta’ and ‘Hinomaki Green’ are good culinary varieties ideal for fools, pies and crumbles while dessert varieties such as ‘Hinomaki Red’ can be eaten raw when ripe.

Plants will grow to 1m high and should be pruned to keep them open and accessible with fruiting spurs shortened for larger berries.

Traditional raspberry canes fruit in July on last year’s growth. Over the course of the year, new, green canes grow which should be tied-in in autumn or winter and the old fruited canes cut away to make space. They are usually trained on wires supported between stout posts and can grow up to 2m tall. ‘Glen Ample’ is a very productive variety with good flavour. ‘Octavia’ is a new variety fruiting into August with improved flavour. 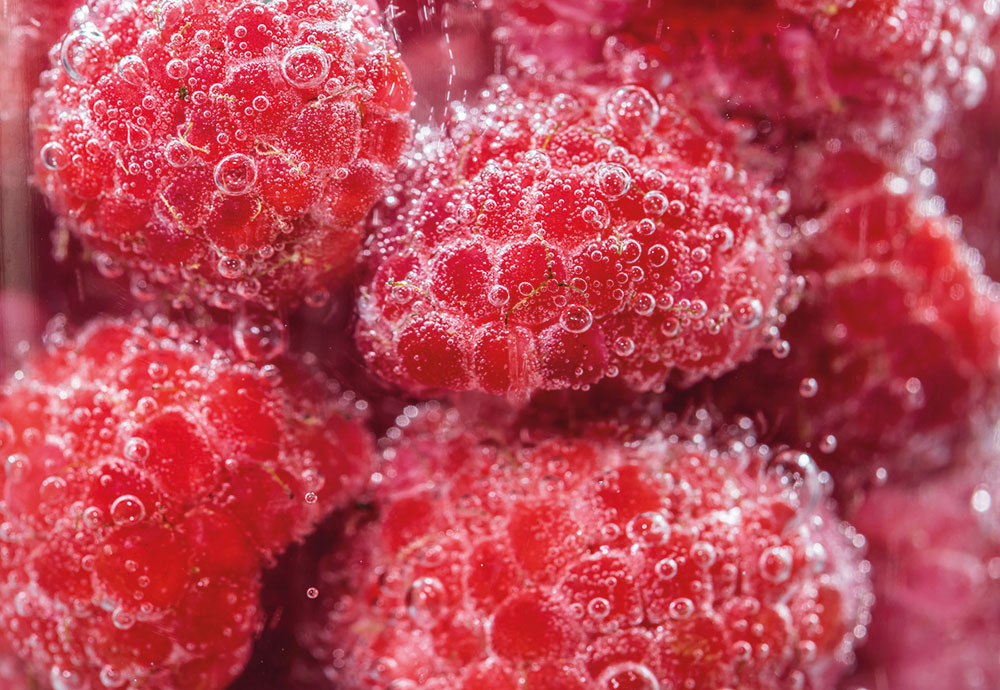 These plants fruit on this year’s growth and so require less in the way of support and are easily pruned down to the ground in winter. ‘Autumn Bliss’ is commonly grown but has now been superceded by ‘Polka’ which produces full flavoured fruit as long as the weather is good in September and October. Raspberries dislike heavy soil, a light sandy loam is ideal, enriched with garden compost or leaf mould. Look out for the compact ‘Ruby Beauty’ which can be grown in patio pots and containers.

Cultivated blackberries are strong plants which produce larger fruit than their wild cousins but it is debatable whether they taste as good. ‘Bedford Giant’ is a good traditional variety while ‘Adrienne’ is a thornless variety which makes picking more comfortable.

Hybrid berries are crosses between blackberries and raspberries and are a bit tart for raw consumption but make excellent pies and conserves. Most loganberries are extremely prickly but thornless varieties have been bred, the long conical fruit is a dark crimson purple and full of flavour. Tayberries are sweeter and dark red in colour. Like blackberries, they are usually trained on wires or canes and will grow 2-3m in each direction. The year-old canes produce the fruit so these are cut out in the autumn to be replaced with new growth, which will need to be tied-in on the framework.

Blueberries have become increasingly popular in recent years, the mid-season ‘Bluecrop’ and early ‘Patriot’ are among the best while ‘Pink Lemonade’ has a similar taste to regular blueberries but an unusual colour.

The large bushes can reach over 1.5m tall but can be grown in pots with newer more compact varieties now available. They prefer moist soil in full sun and dislike lime, so should be planted with ericaceous compost or leaf mould.