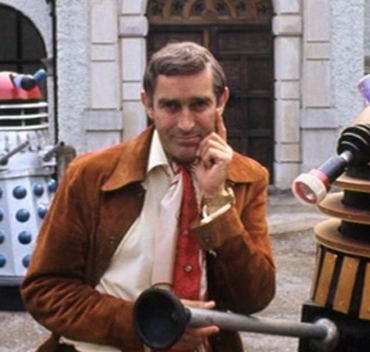 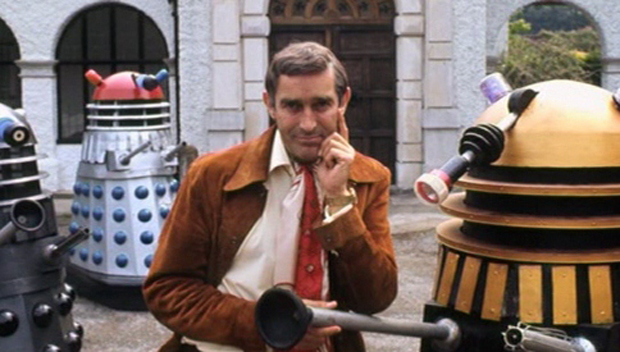 Terry Nation was born in 1930 in Llandaff to Gilbert and Susan Nation. Terry’s father, known to everyone as Bert, trained as an upholsterer. By trade, he sold furniture, but later he ventured into a multitude of business ideas, ranging from chicken farming to the stock markets. His mother was a devoted housewife and although Terry’s parents both had very different personalities, they both passed their positive attributes down to him.

“I was a wartime child. My Dad went off to the army and my mother was an ARP – an air-raid warden. I was an only child, and I used to spend nights alone in an air-raid shelter. And I would make up stories for myself — I was entertaining myself in those days! I seem to remember I was always believed to be a terrible liar. Nowadays they would say ‘He’s got a wonderful imagination’, but in those days I was just ‘that liar’, you see. So I think I always made up stories, mostly with me as the hero! There was no television of course, but I used to listen to the radio, and I also read a great deal.”

Reading was Terry’s great childhood pastime, his parents constantly reminding him that it was bad manners to read at the dinner table. When his books were taken away, he would study the labels on boxes and jars. This love of books was something that he would carry with him until the end of his life.

At school, Terry was often accused of daydreaming and being lazy. He put little effort into school and as a consequence of his mediocre success, he decided not to pursue higher education. Despite this, he began expressing his vivid imagination through writing. He began to write for, and appear in, local plays, becoming an active part of the local theatre scene.

American radio was introduced to Terry during World War II. He became a big fan of the American stars – stars like Bob Hope and Jack Benny. Terry’s focus now turned to comedy writing. At the age of 22, he upped sticks and moved to London to chance his arm as a comedian. His attempts at standup comedy however, were far from successful:

“I wrote my own material, performed it – and died a death! By this time, I was living in London, starving, trying to be an actor, trying to be a standup and trying to write. Then somebody told me: ‘Hey, the jokes are terrific – it’s you that’s terrible!’ That was a bad moment for me.”

At that low point in his career, someone suggested that he seek out Associated London Scripts, who were looking for young comedy writers. The agency had been set up by, among others, Spike Milligan and Eric Sykes. Terry duly went along and was told to bring back a script for Spike’s radio play the ‘Goon Show’. That night Terry wrote a script and brought it back the next day. Within a few weeks he was hired to do a thirteen week comedy radio show called ‘All My Eye and Kitty Belwitt’.

However, Terry was finding comedy writing extremely difficult. As he put it:

“Comedy writing is the toughest, toughest writing in the world.” Those days were really tough for him, but he soon gained a name for himself as a writer and Terry began realising that being a writer, not a comedian, was his strength.

Over the following few years, Terry would go on to write for some of the biggest radio names of the time – Tony Hancock, Spike Milligan, Frankie Howard, Ted Ray and many more. He became prolific in his work, helping to write over 200 radio shows. Although Terry accompanied Hancock as his chief screenwriter on tour in 1963, Hancock would regularly neglect Terry’s scripts in favour of recycling his old material. Following an argument, Hancock fired the Welshman.
It was around this time that Terry met his future wife Kate. She was studying the piano at the Royal College of Music, winning many awards as a gifted musician. Terry was 27. Not long after, they had a baby girl named Rebecca and took an apartment in London.
Prior to his sacking by Hancock, Terry had declined an offer from scriptwriter David Whitaker to write for a new science-fiction programme that was entering production at the BBC called Dr Who. Now unemployed, and with a young family to support, Terry contacted Whitaker and accepted the offer, writing the second Doctor Who serial, The Daleks (also known as The Mutants and The Dead Planet). The serial introduced the eponymous extraterrestrial villains that would quickly become the series’ most popular and enduring monsters, and resulted in a major merchandising success for the BBC.

“The Daleks had to be something mechanical. And in order to make it non-human what you have to do is take the legs off. That’s the only way you can make it not look like a person dressed up. I had seen the Georgian state dancers, where the girls do this wonderful routine. They wore floor-brushing skirts and took very tiny steps and appeared to glide, really glide across the floor. That’s the movement I wanted for the Daleks.”

Having risen in the public consciousness, Terry went on to contribute further scripts to Doctor Who but also worked in commercial TV, contributing scripts to series such as The Avengers, The Baron, The Champions, Department S, The Persuaders! and The Saint.

The production of Terry’s next BBC creation, Blake’s 7, followed a group of criminals and political prisoners who are on the run from the evil “Terran Federation”, piloting a stolen spaceship of unknown origin. Running for four seasons from 1978 to 1981, Blake’s 7 acquired a worldwide fan following.

During the 1970s, Terry also wrote a children’s novel for his daughter Rebecca (after whom he named the character of Rebec in the 1973 Doctor Who serial Planet of the Daleks) titled Rebecca’s World: Journey to the Forbidden Planet, as well as a novel based on Survivors.
In 1980, Terry moved to Los Angeles, where he developed programme ideas and worked for various production studios. Little of his work from this time was as successful as that of his earlier period in Britain. He penned scripts for the TV series MacGyver, in addition to A Masterpiece of Murder and A Fine Romance.

Terry suffered from poor health in his final years, and died from emphysema in Los Angeles on 9 March 1997. Shortly before his death, he had been collaborating with actor Paul Darrow on another attempt to revive Blake’s 7.
The Llandaff Society is hoping to celebrate the life of Terry Nation, with a blue plaque on the home he grew up.

The group’s chairman, Geoff Barton-Greenwood, said: “We are trying to get a blue plaque put up at the time of the 50th anniversary on the house where Terry Nation came from.”

The anniversary is being marked by the BBC with a special episode on November 23.

“At the moment we are seeking permission from the owner of the house in Fairwater Grove West, and in addition, we want the BBC to take an interest in this, and possibly get one of the main characters from the Doctor Who series to do the unveiling.”