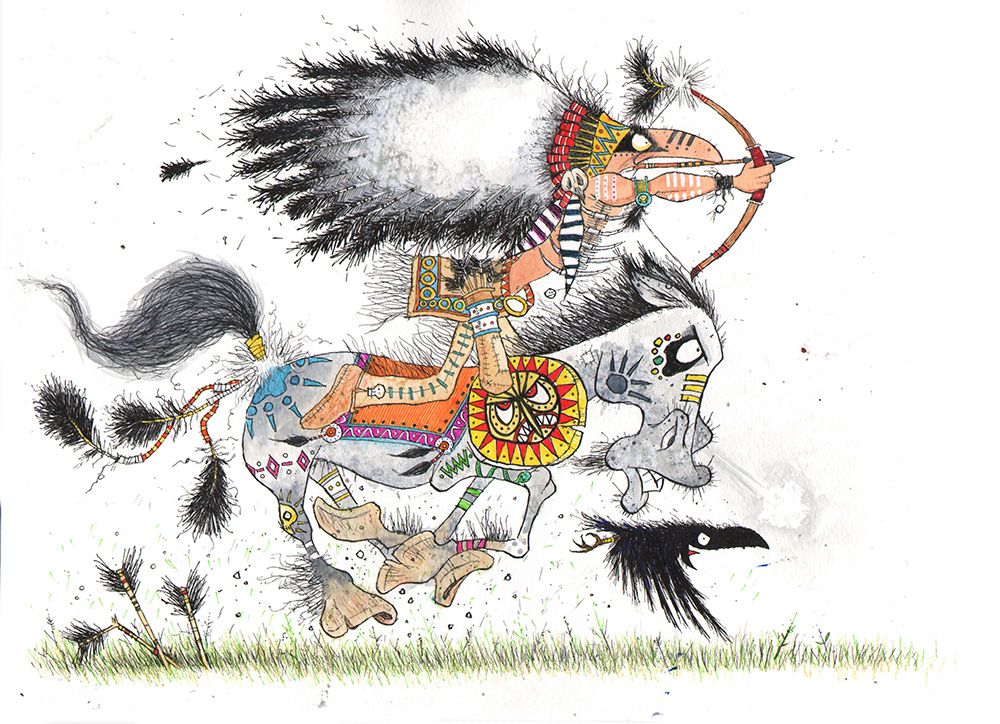 Rhiwbina’s Eric Heyman is a self-taught illustrator and artist. The former firefighter talks to Rhiwbina Living about his life and work

Down in Rhiwbina, while the village sleeps, there’s a light on. In a workshop at the bottom of his garden, Eric Heyman is putting the final touches to another of his artistic creations.

“I was brought up on Lon Isa in the Garden Village. I went to Rhiwbeina Primary School and had two wonderful teachers there – Mrs Jones and Mr Thomas. They were very inspirational, not just with my art but in life too. I then went to Whitchurch High School, where I had an art teacher called Mr Reynolds. I spent more time in that art room than anywhere else.”

Eric’s teenage years were to prove a time of bloom for ideas and influence:

“At that point in my life, I wanted to be a political cartoonist, but the older I got, the more I was interested in the likes of Disney animator Ken Anderson and people like Quentin Blake.

“I remember watching Quentin hosting Jackanory once and he was drawing the characters on the wall as he was telling the story. That fascinated me and always stuck with me. I began drawing cartoons and illustrations and got my first commission from a local lady called Pat Campbell in Rhiwbina. She wanted me to do some illustrations for Rhiwbina Tennis Club and that’s how I earned my first 10 shillings.”

Eric completed his education at Whitchurch High School, but as far as his art training was concerned, that was as far as it went.

“I’m totally self-taught. I never went to art college and I’ve never had any formal training. Rhiwbina Library was a great source of information for me and I’d head there to take out books on anatomy. I was interested in drawing cartoons but I was also wanting to develop my own style.”

For Eric, illustrating was a love that he had to nurture in his spare time, the duties of life beckoning him to other forms of employment.

“I was a Police Cadet for a while when I was younger and almost went into the Royal Marines. In the end, I joined the Fire Service, starting out at Adamsdown Fire Station and ending up based at Whitchurch.” 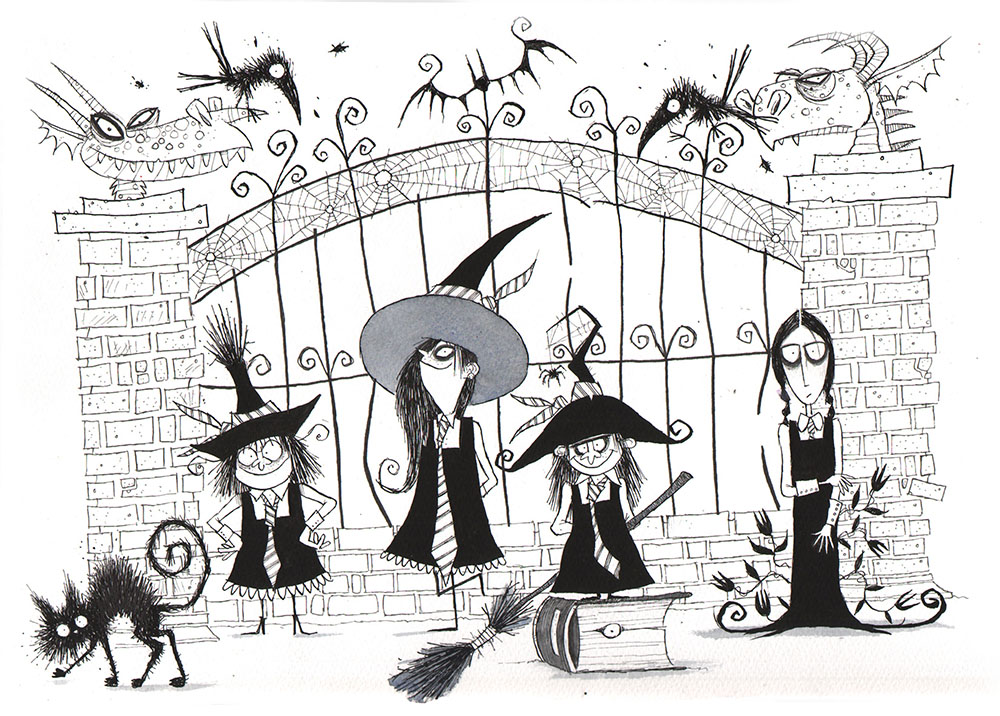 But his affection for art was never far away:

“I did some illustrations for a few of their information guides and started getting into the illustration industry via a friend of mine called Mike Collins. He was one of the artists who drew the Wolverine character for the Marvel comics. He told me to put a portfolio together, so I did and I sent it off to lots of publishers. I had lots of rejections. The Welsh Books Council did get in touch however, and wanted me to work on a few projects for children’s books, including work for the Oxford University Press, Sony Pixar and Disney Animation. I was still employed as a firefighter at this point, but a few years before I was due to retire, Emma Ball Ltd contacted me wanting me to work on their greetings card products. I spent about 4 or 5 years creating cards but the main goal I’d set myself was to get a good agent and a big publicity deal.”

Eric is keen to pass on his skills to others, particularly those who are setting out on their own journeys of discovery.

“I’ve run a few workshops at the National Museum Cardiff and I recently worked with the Welsh Books Council at Rhoose Primary School which was great.”

The pull of creation is something that’s driven Eric for most of his life:

“I’ve always had an interest in illustration because each one creates a new story. I love being creative and when it comes to sitting down with a blank piece of paper, I try and imagine the story behind what I’m looking to achieve. It might take me a morning to finish a piece or it might take me a few days. There’ll always be a lot of waste paper hanging around my workshop and sometimes, I like to leave a piece that I’ve worked on and come back to it a few days later. 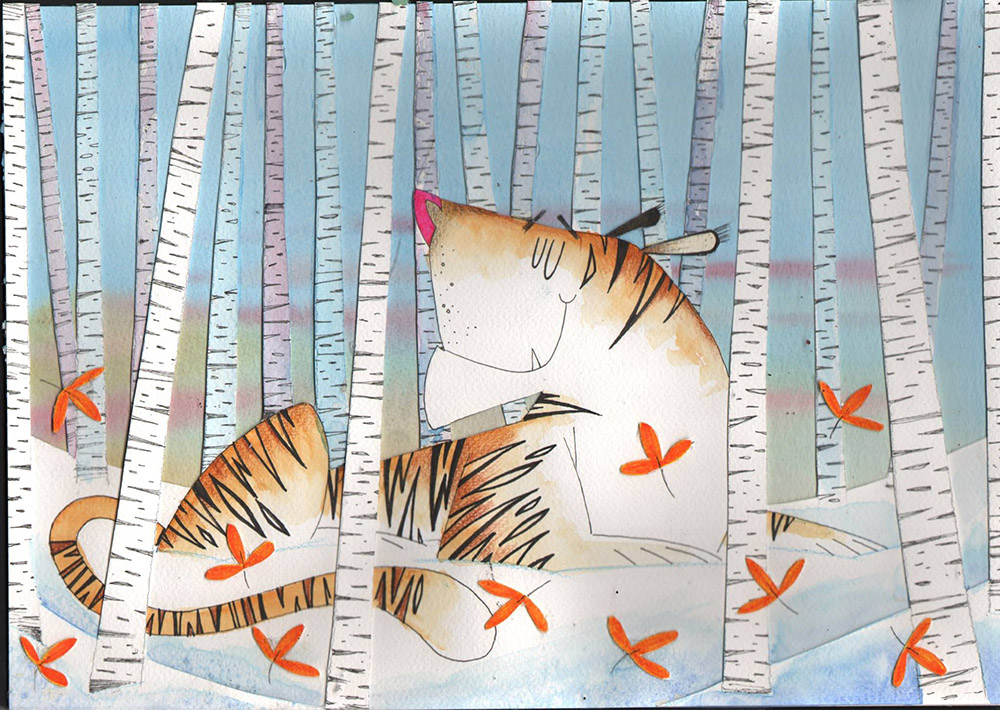 “I’ve developed my own style over the years but I take a lot of inspiration from Ronald Searle who was an artist and satirical cartoonist. He was responsible for the creation of St Trinians School. My style is more ‘scratchy’, which is achieved through several different techniques that I’ve learned. I use a dip pen, which is almost like one of those old quills that people used to use. I also use a knife to literally scratch away at some of the paint I’ve laid down. I apply this to drawings of trees to help it create that look of depth. I create collages which are interesting because it’s another medium by which I can create scenes.”

Looking ahead, Eric has every reason to be excited:

“I’m in the process of developing a few of my own characters. The main one I’m working on is one called Blue Bear, who I’m hoping to feature in a picture book. Blue Bear is concerned about the environment and draws other animals in the books. He’s not quite there yet. More than anything I’d like to get a big book deal under my belt. Then I’ll be really happy.”