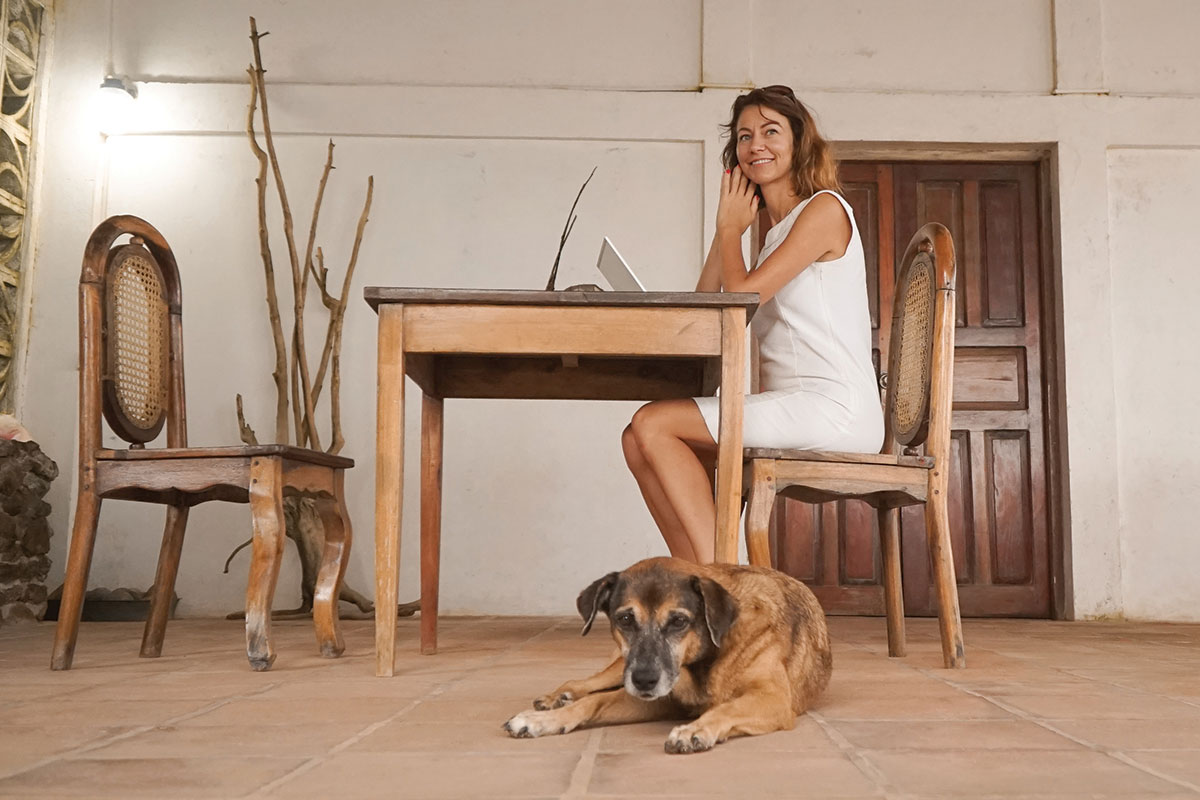 Samantha Brown gave up her 9 to 5 job and packed a bag to start a new lifestyle, becoming a digital nomad, travelling the world and working from a laptop

“It’s my Coronavirus Protection Bubble on wheels,” she says, excitedly.

Meet Samantha Brown. A former Bishop of Llandaff student, now travelling the world in her camper van as a digital nomad. Her work tool is her laptop. Location: various.

“I feel safe in my van,” she says. “I’ve got everything I need here.

Somewhere to eat, work, wash and sleep. I’m off to France next week.”

Sam hasn’t always been a traveller. In fact, for the last few months, much like the rest of us, she’s been trapped in her home. But her sense of adventure has returned.

“I was always seeking adventure as a child. Building dens and experiencing the outdoors was how I liked to spend my days.

“I always had the desire to communicate too. As a kid, I used to record pretend radio programmes on my tape recorder with my sister. These days, I have my own podcast. As a youngster, I was into telling stories and I’d dream of creating a cosy little home for myself. I think that’s where this lifestyle comes from.”

Sam attended Bishop of Llandaff High School and it was here that she embraced her education.

“The most abiding memories I have of Bishop of Llandaff was that we laughed a lot. Needless to say, we learnt a lot too and we were given a solid education there. I’m thankful that I went to one of the best schools in Wales although I have to admit that I found assemblies boring. I’d skip these by hiding in the loos. There’d be a few of us doing that!

“As I moved into Sixth Form, I began my love affair with music, especially Cardiff’s indie scene. I felt that to my friends, I was a bit of an arty outsider – but they didn’t love me any less.

“By the mid ’90s, I was working as a nanny in Paris where I found out that I was pregnant. After having my daughter, I completed my degree in English Literature as a young single parent at Bristol University before launching headlong into the corporate world.”

Sam spent 12 years as the Head of Marketing and Communications for large corporates and national charities. She bought her home in Bristol and felt settled in her life.

But that all changed in 2017, when Sam’s father was diagnosed with cancer.

“Dad worked hard his entire life and was due to retire when he found out that he was ill. He’d wanted to spend his retirement seeing the world but sadly, he never got to do it.

“It made me question my life. I realised that I didn’t want to spend the next 20 years stuck in an office. I wanted to see the world, so I took a sabbatical in 2019, not long after my Dad had died.”

Sam went travelling across 12 countries in South and Central America, picking up work as a freelance marketing consultant along the way.

“I eventually came back to my day job and was toying with the idea of handing my notice in, when we were told that the organisation had failed to retain its contract and I was handed a redundancy.”

Freed from the shackles of the corporate world, Sam took to the skies and headed east with the aim of becoming a digital nomad.

“I spent two months in Bali and two months in Thailand. I also set up my blog and podcast to provide inspiration to others. Christmas and New Year was shared with a group of digital nomads on a remote island. It was wonderful.”

Sam then moved on to India. Still working from her laptop, Sam was able to combine the experience of living within another culture while paying her way through her online work. That was until Coronavirus’s tentacles began reaching around the world.

“I’ll always remember 17th March. I’d just had dinner when I found out that the EU had closed its border. At 11pm that night, I booked a flight home that was due to leave at 7am the next morning.

“I was in the middle of the Goan countryside with no taxi available, so I started knocking on neighbours’ doors to see if anyone would give me a lift to the airport. Unfortunately no one would.

“In the end, the only viable option I had was to use the scooter I’d been hiring to get me there. I packed my backpack and headed off into the night, bound for the airport.

“Out on the highway in the dead of night, it was only after I spotted traffic coming towards me that I realised I was driving down the carriageway in the wrong direction. The traffic slowed and I had to try and manoeuvre my scooter onto the right carriageway. Then my backpack fell off and its contents spilled out. I’d been relying on my iPhone for directions – it fell onto the road and two cars passed over it. Thankfully, they hadn’t damaged it.

“I arrived at the airport at 5am, abandoned the scooter and took a photo of it so that I could let the hire company know where it was. And all the while, I could hear my dad’s voice telling me to get home.

“It was pure instinct. I knew I was doing the right thing, even though it seemed totally crazy at the time.

I was so wired on the initial domestic flight that I couldn’t sleep, despite being up all night. When I finally got on the BA flight to Heathrow, the crew confirmed that it was one of the last to leave India – so my instincts were right.”

Exhausted, Sam eventually made it back to her Bristol home which she normally rents out to lodgers and her daughter whilst travelling.

From lockdown to digital nomad

“The only room left in the house was the small one I’d been keeping all my belongings in. I had no choice but to use it as both my office and my lodgings. Because I’d just come back from abroad, I was forced to quarantine for seven days. Lockdown then started on the sixth day. I was desperate to see my mum and siblings but I had to abide by the rules.”

And so it was, that Sam was marooned in her room for 10 weeks, not sure of when she could restart her travels or even see her close family.

“Although I realised I was fortunate to get home and still be able to work through my consultancy, I found lockdown difficult. I lost all my energy and drive and it wasn’t until I hit upon the idea of getting a motorhome that my excitement returned.

“I bought the van with the rest of my redundancy money and named her Juno – after the Ancient Greek goddess. She’s the protector of women.

“Juno is completely self-contained. I have everything I need – including a toilet, shower, kitchen and WIFI for me to work remotely. I’m off to France next week. I’ve always wanted to see Europe and as we’ll be leaving it at the end of the year, it’ll be harder to do that any time later. I figured that this was the safest and cheapest way to get to see it.

“I plan to keep Juno for a few years whilst this pandemic continues – after that, who knows where the road will lead me.”

Be inspired by Sam’s journey by following GenerationXit on YouTube or visit www.generationxit.com