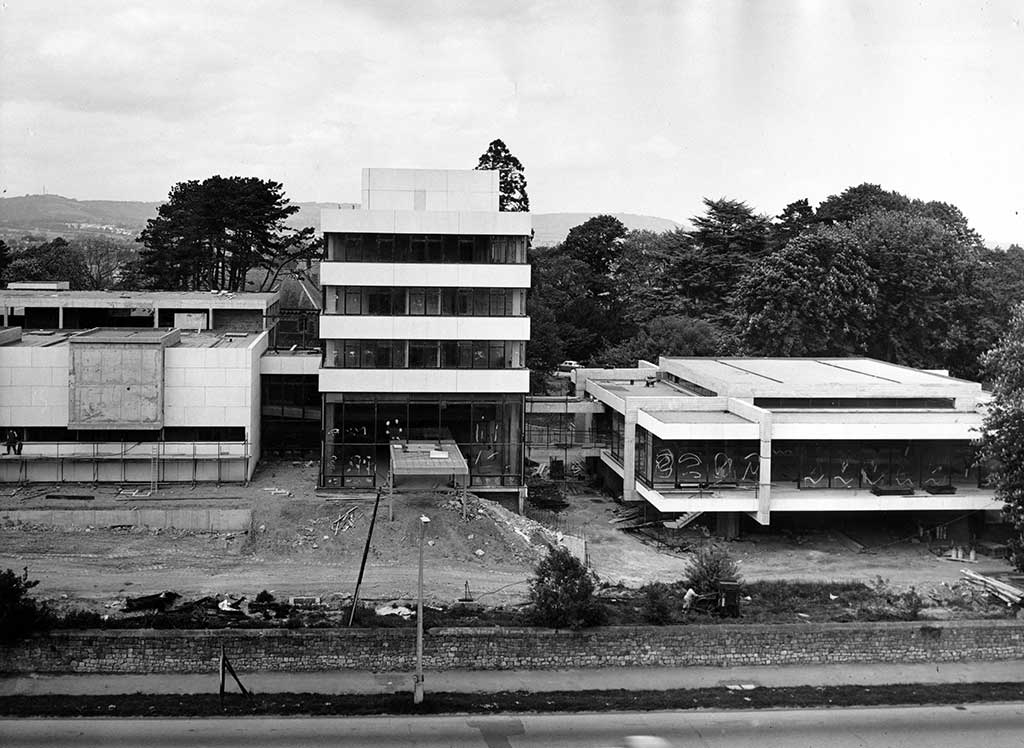 Broadcasting House in Llandaff will soon be gone forever, demolished by bulldozers to make way for housing. This is the story of the BBC in Wales and its iconic home

At 5pm on 13th February 1923, the British Broadcasting Company as it was then known, opened its Cardiff station and began broadcasting in Wales for the first time.

The following year, a Swansea station was opened and by the time the company became the British Broadcasting Corporation in 1927, the stations were to become part of what was known as the ‘West Region’.

But during the 1930s, there was a growing demand for a separate Welsh Region that would provide programmes both in the English and Welsh languages. A lengthy campaign followed and it wasn’t until 1937 with the Penmon transmitter opening, that Wales began getting its own content. Sir John Reith, the then director general of the BBC, visited Cardiff for the Region’s inauguration ceremony in July that year.

The regional services were effectively shut down during World War II but the BBC’s studios in Bangor kept up the nation’s morale by becoming the temporary home of the variety department although this fact was never officially announced. The studios in London had been deemed to be at too much risk of bombing. Famous names such as Tommy Handley, Arthur Askey and Charlie Chester were relocated to Bangor and tasked with providing light entertainment shows to millions of radio listeners across the UK.

In the post-war years, it became apparent that television was becoming increasingly popular and demands were made for Wales to have its own television service. Westminster appointed a committee to look into the future of broadcasting in the UK in 1960 and this paved the way for broadcasting in Wales.

The committee’s report was published in July 1962. One of its findings was that ‘the first priority should be given to separating the BBC’s service to Wales from that to the English regions’. These findings laid down the foundations for the establishment of a dedicated Welsh BBC service.

BBC Cymru Wales was officially launched on 9th February 1964. A major promotional campaign led up to the launch. Viewers were given instructions on how to adjust their TV sets to receive the new service. At first, twelve hours of programmes a week were broadcast – five hours being in English and seven in Welsh. The service was also able to opt out of the UK network when necessary and this afforded Welsh-speaking viewers more convenient viewing times. Previous to this, they were limited to anti-social viewing hours.

BBC Cymru Wales firmly established itself as an integral part of the Welsh viewing public very quickly. Central to this were the daily news programmes Wales Today and Heddiw. In a time of political Welsh upheaval, current affairs programmes such as Week In, Week Out and Cywain provided a public platform for political debate. The news department came of age during the events of the Aberfan tip disaster. Reporters were able to provide reports from the village that included speaking to eyewitnesses.

It would be 1966 when the BBC moved into its new headquarters in Llandaff. Princess Margaret was on hand to officially open the building on St David’s Day 1967. For the first time, the corporation’s activities had been consolidated into one place, having previously been dispersed to various buildings throughout Cardiff.

The building was designed by Dale Owen, a leading figure in the Welsh architectural scene, who was heavily influenced by practices in the United States. Although he was born in Merthyr Tydfil in 1924, he attended Whitchurch Grammar School and went on to study at the Welsh School of Architecture in 1941.

After working in the States during the 1950s, Owen returned to Wales in 1958 when he joined the Percy Thomas Partnership, becoming a partner in 1964. He was responsible for overseeing the colleges at the University of Wales, before taking on Llandaff’s Broadcasting House project.

It was reported that Owen was thrilled to get one over the thrifty bureaucrats at the BBC when he persuaded them to install real Mies chairs for the reception area. Owen died in 1997. 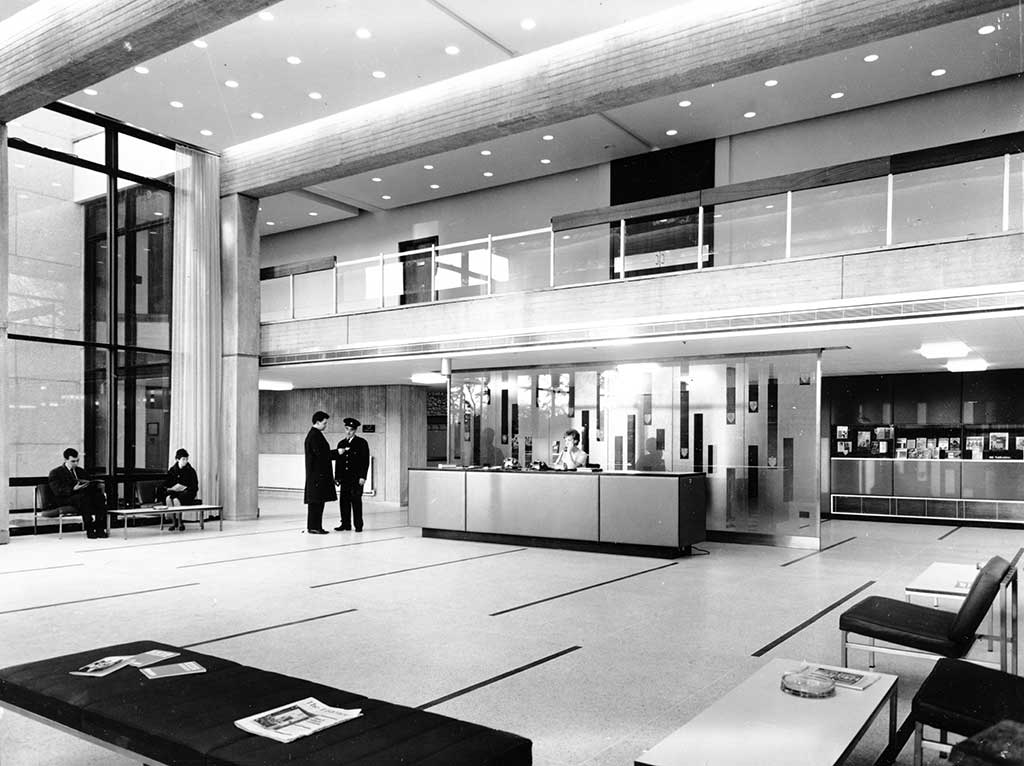 The decade ended with one of the largest outside broadcasts for BBC Wales, the investiture of the Prince of Wales in Caernarfon Castle on 1st July 1969.

Broadcasting House continued to serve BBC Cymru Wales through to the end of the century. 1970 saw colour on BBC Wales television programmes for the first time when a report from the Llangollen International Eisteddfod in July that year was broadcast. 1974 also saw the launch of the BBC’s longest-running (and UK’s second longest-running) soap opera, Pobol y Cwm. 1977 saw the introduction of two national radio stations – BBC Radio Wales and BBC Radio Cymru, both of which continue to provide entertainment and information for the country.

The early 80s were dominated by the launch of S4C, the first television channel to be aimed specifically at a Welsh-speaking audience. The channel started broadcasting on 1st November 1982, the night before Channel 4’s opening. Towards the end of the 1980s, digital broadcasting was looming on the horizon.

Satellite City and Belonging were two BBC programmes that were English-speaking and met with critical acclaim throughout the 1990s. Devolution in the late 90s resulted in the BBC investing heavily in programming from Wales and guaranteeing a place on the UK network for programmes in the areas of drama, music and factual programming.

By 2008 though, plans were being developed to move the BBC from Broadcasting House in Llandaff to a new location. The Welsh Government decided not to list the Llandaff site, against the recommendations of heritage advisors Cadw. Welsh Minister of Culture and Sport John Griffiths said that the site was not of special or historic interest. The charity Twentieth Century Society, which campaigns for the preservation of architectural heritage from 1914 onwards, disagreed. They had previously said that the building is ‘one of Wales’ most outstanding post-war buildings’.

In August 2013, it was announced that both Broadcasting House and Ty Oldfield opposite, would be sold. Plans were drawn up to move operations to a purpose-built headquarters and in 2015, the BBC announced that their chosen location would be in Central Square in Cardiff city centre.

“The move to Central Square is the biggest transformation project ever undertaken by BBC Wales – and the proposed changes, while extremely difficult, are essential if we’re to ready the organisation for the relocation.

“With such a major investment in new technology systems – including a fully digitised archive – changes were inevitable.”

In late 2014, planning permission was obtained to convert the site of Broadcasting House and neighbouring Ty Oldfield into 400 residential units.

Soon the iconic building will be gone but its legacy in Welsh broadcasting history will be forever remembered.