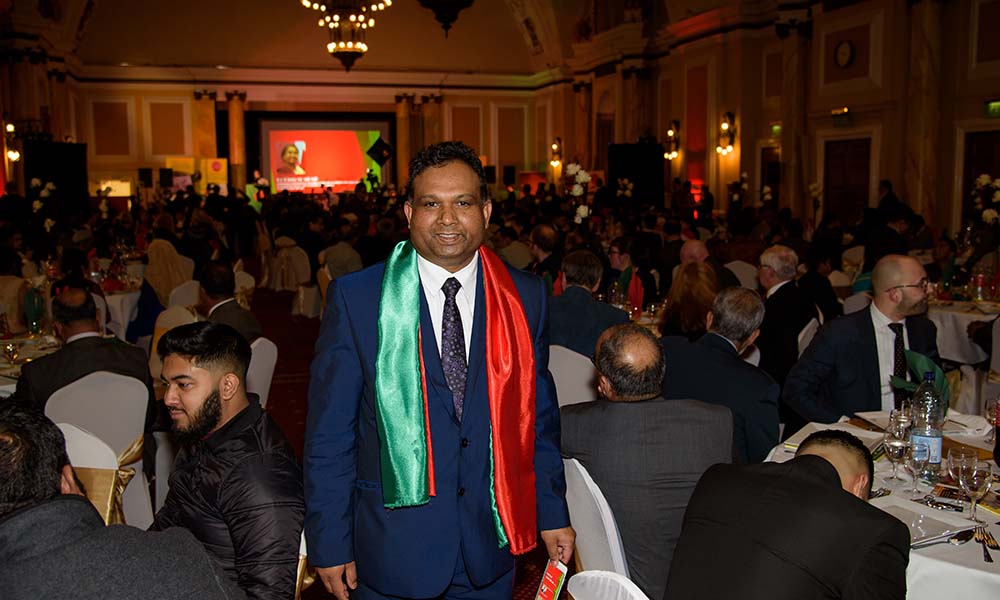 The event was sponsored by NAID charity organisation in partnership with International Mother Language Monument Project Committee Cardiff and was organised by Cllr Dilwar Ali. After a decade of campaigning, the celebration and fundraising night became a great success and funds were raised by the whole community via pledges from the Founder Members, Life Members, Members and friends of International Mother Language Monument (all names will be displayed on plaque boards nearby the monument).

“I was delighted to be able to sponsor and host with Councillor Dilwar Ali the celebration of International Mother Language Day, which is observed every year and was designed to promote linguistic and cultural diversity and multilingualism. It was created by UNESCO in 1999 in order to promote the spread the usage of the mother tongue and to make people aware of the range of linguistic and cultural traditions throughout the world. The aim is to inspire solidarity based on understanding, tolerance and dialogue. Over the many years, the community of Cardiff has made a significant contribution to our city, its economy and its rich cultural heritage. It is important that we as a city celebrate and promote this special day.”

“I was very glad to see so many community representatives, guests from Bangladesh Government, Dr Dipu Moni MP and her team, Local Government and the Welsh Government and pupils from across Cardiff and UK. The celebration was greatly filled with songs, poems, auctioneering and raffle prize draws. It was wonderful to hear the inspiring speeches, and positive support of the project.

“I hope that this event will help further raise awareness about the Cardiff International Mother Language Monument project, which is working to erect a language monument in Grangemoor Park. This is intended to act as a focal point for this annual celebration in the future and to provide an educational resource for local school children. It has been a great pleasure to see the International Mother Language Monument is now successfully in the final stages and will hopefully be erected by 2018 with the support of all communities. So, I would like to call upon the people of Wales and UK individuals, community groups and organisations to take part to build this Monument for 2018 and join us in our celebration of International Mother Language Day and show our support for the diversity of languages spoken across the world.”